WE ARE STILL HERE: Watch The Trailer For Acclaimed Indie Horror 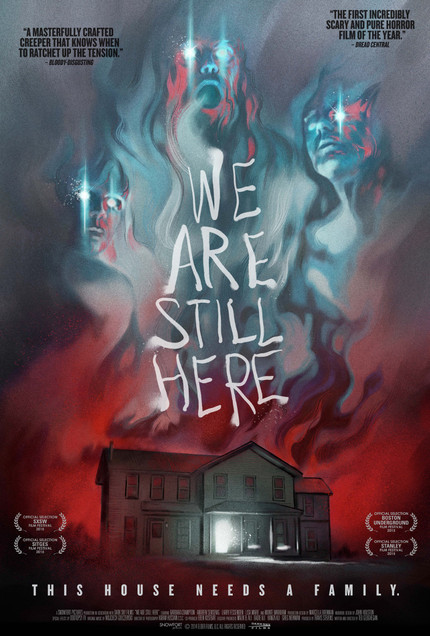 Indie horror We Are Still Here is one of those special little success stories that proves personalities still matter and sometimes the good guys win, even in this age when numbers rule all. Though he may not have been known to audiences prior to his breakout success on the festival circuit, writer-director Ted Geoghegan has been a (welcome) fixture on the festival circuit for years, present at various events as organizer, publicist or fan where he has built a wealth of goodwill for the simple reason that he is one of the Good People in that world. And so word that he was moving forward with his debut feature project last year was met with a mix of elation - because Geoghegan simply oozes this stuff from his pores - and just a dash of slow creeping dread that if he got it wrong a whole bunch of us on the press and industry side of the equation would have to look a friend in the eye and tell him so.

He didn't get it wrong.

A selection of the 2015 SXSW Film Festival, We Are Still Here has gone on to be one of the most acclaimed indie horror titles of the year and with the public release coming up the first trailer has arrived to give audiences a taste of why.

After the death of their college age son, Anne and Paul Sacchetti (Barbara Crampton and Andrew Sensenig) relocate to the snowswept New England hamlet of Aylesbury, a sleepy village where all is most certainly not as it seems. When strange sounds and eerie feelings convince Anne that her son's spirit is still with them, they invite an eccentric, New Age couple (Larry Fessenden and Lisa Marie) to help them get to the bottom of the mystery.

They discover that not only are the house's first residents, the vengeful Dagmar family, still there - but so is an ancient power. A primal darkness slumbers under the old home, waking up every thirty years and demanding the fresh blood of a new family.

An altogether new take on the haunted house genre that deftly mixes human drama and comedy, WE ARE STILL HERE is a couple's terrifying journey through darkness and loss set against the freezing New England winter.

Do you feel this content is inappropriate or infringes upon your rights? Click here to report it, or see our DMCA policy.
barbara cramptonlarry fessendensxswted geoghegantrailerwe are still here