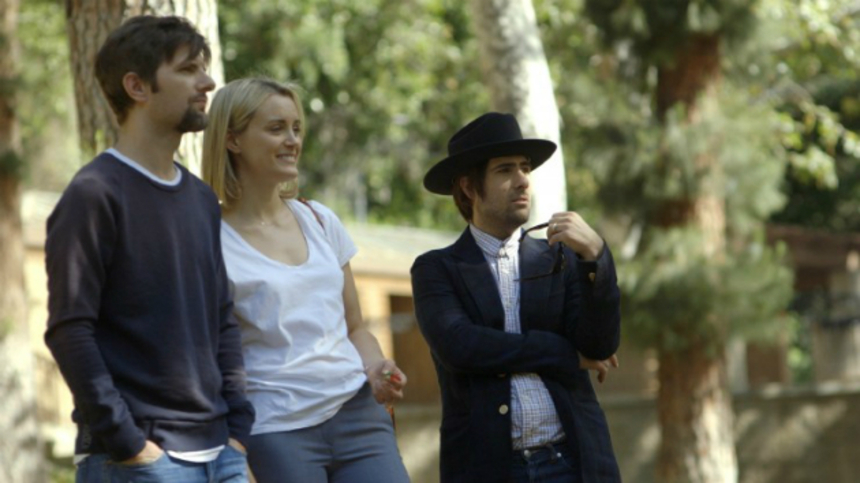 It's so incredibly tempting to reveal all the bizarre places Patrick Brice's new film, The Overnight, takes its audiences, who, if they're anything like this viewer, will likely watch the film with mouths gleefully agape.
The film opens in the bedroom of a couple, Alex and Emily, played by Adam Scott and Taylor Schilling, having banally, routine sex in their brand new Los Angeles bedroom. The two, along with their toddler son, have just moved to L.A. from Seattle, and are feeling a little out of their element in the land of the fabulous. Far more accustomed to the down to earth vibe of their precious home town, in the face of new age L.A. norms, they're content to feel a little square by comparison.
Then one day, when Alex and Emily take their little one to the park, after their son offers a sandbox playmate a gummy worm, they're introduced to the boy's father Kurt, a hipster in appearance, played by Jason Schwartzman, who scolds them for the crime of almost allowing his son to digest the gummy aberration. Though perturbed by the couple's offense, Kurt, being friendly and evolved, forgives them and invites the L.A. newcomers over for dinner with his beautiful European wife Charlotte, played by Judith Godrèche. Alex and Emily, in an effort to follow Kurt's open minded lead, swallow their preconceived judgements and agree to befriend the locals of their new environment.
And so begins the west coast dinner party odyssey to end all dinner parties. Half the fun of The Overnight lies in Brice's ability to expertly orchestrate the unexpected, and given that it isn't the function of the critic to spoil plot points, suffice it to say, the subsequent events transpire like Paul Mazursky's Bob & Carol & Ted & Alice on crack. The foursome cast exercise brilliant chemistry, each individually offering up their A game. Scott, who is tragically lovable in other works, like the under-appreciated Party Down, is at his best, naturally performing Brice's hysterical dialogue to perfection. Similarly, Schilling has never been better delivering comedy far richer than she's offered in Orange is the New Black. European beauty, Godrèche, is priceless parodying certain stereotypes established by some of her more risqué overseas work, playing a character who has been on more than a few long journeys from Milan to Minsk (Rochelle! Rochelle!). But no one in the flawless cast is more tickling than Schwartzman as the excessively open-minded painter with an enormous -ahem- amount of confidence.
Along with Brice, all five parties are equally pivotal collaborators in bringing this hysterically saucy material to life. Earlier this year, Brice shone as an auteur worthy of evoking elating gasps with the yet to be released, Creep, co-directed by Mark Duplass. Brice also has Duplass to thank for producing this small indie gem, but one imagines the honor is entirely Duplass'. The Overnight affiliates Mark with yet another indie marvel, possibly as shocking to today's audience as Mazursky's yesteryear explorations of love, lust, curiosity, and the unspeakable baggage of fidelity. Insecurity may not be an especially laughing matter, but in order to maintain stability it's important to laugh and The Overnight is an early contender for one of the funniest films of the year.

But, if you'd rather not consider these themes comical, Eyes Wide Shut is also excellent. Or, perhaps, these issues are simply best left unexplored. That said, enter at your own risk.
Review originally published during the Sundance Film Festival in January 2015. The film opens in select U.S. theaters on Friday, June 19.
Sign-In to Vote
Tweet 0 Submit

Do you feel this content is inappropriate or infringes upon your rights? Click here to report it, or see our DMCA policy.
Adam ScottJason SchwartzmanJudith GodrèchePatrick BriceTaylor Schilling

More about The Overnight