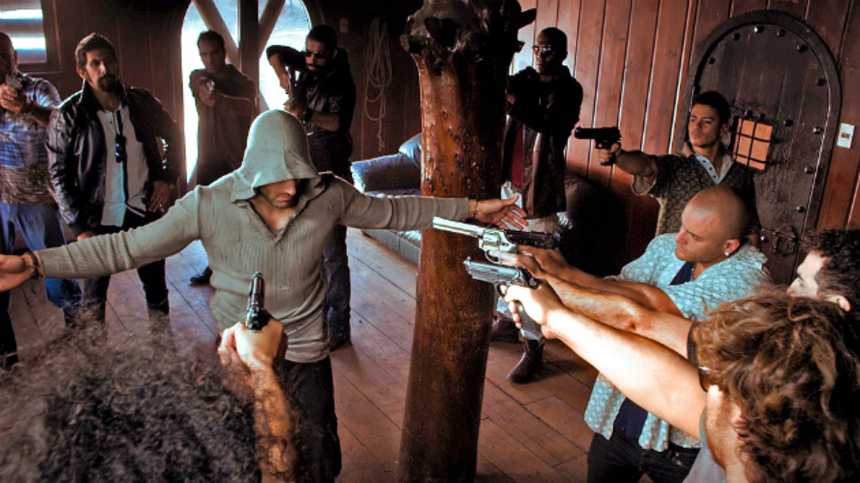 Ernesto Diaz Espinoza has long been a favorite director in the ScreenAnarchy world. His impressive ability to keep the action flowing while dabbling in different subgenres has always been commendable. In Mirageman, Diaz Espinsoza married lo-fi action with the tropes of the super hero story. In Mandrill, it was the spy genre. And in Bring Me the Head of the Machine Gun Woman, the Chilean director turned things in a decisively more female orientation with this exploitation spectacular.

The director returns with Redeemer - a movie that is not only another foray into a new action subgenre - this the MMA-inspired martial arts actioner, but it also marks the return of his action muse. If you missed Marko Zaror during his absence from Machine Gun Woman, get ready. Marko is back! And he brought some new tricks along with him.

Set up as a relatively by-the-book revenge thriller, Marko Zaror plays Pardo, a hit man whose wife was killed by the vicious Alacran (that's "scorpion" en espanol) and now roams the Chilean countryside looking for salvation. When Pardo wanders into a small coastal town, he quickly finds himself in the middle of a war between some townsfolk and a drug syndicate headed by American businessman-turned-wannabe-drug lord Bradock (played to a perfect comedic pitch by Noah Segan). Being the man he is, Pardo must do what's right and help the people of the town, even if that runs the risk of attracting the attention of the man he fears most: the dreaded Alacran.

While the story may not be anything we haven't seen in some form before, what's new for Diaz Espinoza in Redeemer is the all-out action. The fights are choreographed by Zaror himself and it is clear that this man has been doing some studying in his time away (he did act in Machete Kills). This is more The Raid than it is Mandrill and it is clear that Zaror and Diaz Espinoza really took a lot of pride in executing visceral, varied, and well planned fight sequences. Generally they feel much more realistic than some films with plenty of MMA-inspired grappling and from-the-octagon techniques on display. But this isn't a strictly martial arts movie either and the guys take plenty of license to get creative with both guns and whatever else is handy (meat hooks, perhaps?).

While Pardo's main plotline is played pretty straight, the film hits a giant pressure release valve in the scenes involving Segan's doofy drug boss. These scenes are very funny and provide a nice break to the snapping necks and gunshots. But at the end of the day, Redeemer is all about the fights. This is an all-out video game-esque cavalcade of violence. If you are up for it, you will get your ass kicked. Just remember that when you see Marko Zaror about to kick, you better freakin' duck.


Review originally published during Fantastic Fest in September 2014. The film opens in select theaters in Los Angeles, New York City, Houston, Denver and Lubbock on Friday, June 12. It will also be available to watch on various VOD platforms, via Dark Sky Films.

Do you feel this content is inappropriate or infringes upon your rights? Click here to report it, or see our DMCA policy.
ChileErnesto Diaz GarciaMarko ZarorNoah Segan