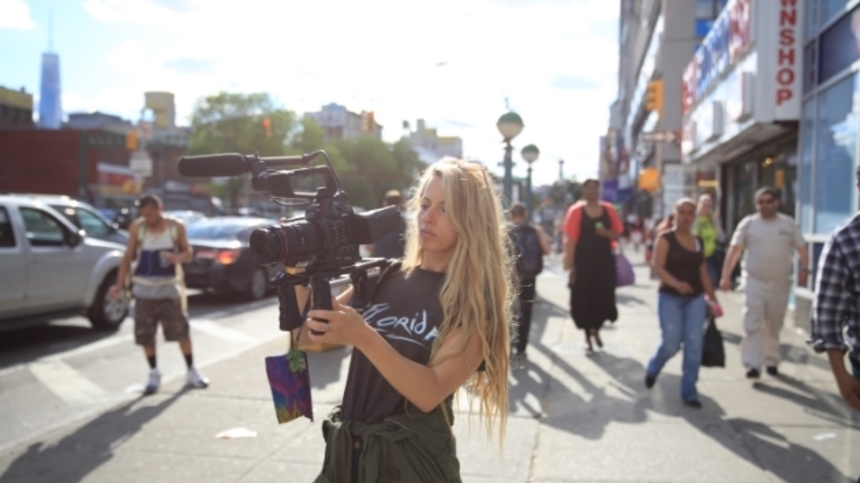 Filmmaker Crystal Moselle is getting a lot of attention these days. Rightfully so, because her film The Wolfpack, about six brothers, all named after Hindu gods, growing up in the confines of their apartment, reenacting movies they saw on TV, in New York's Lower East Side, is most likely one of best documentaries you will see all year.

Even though it wasn't an ideal setting, due to her busy schedule, I had to go for a short phone interview with Moselle as she was traveling.

The Wolfpack won this year's Grand Jury Prize for US Documentary at Sundance this year and is getting a limited release in the U.S. on Friday, June 12, expanding nationwide on June 19.


Crystal Moselle: I'm gonna jump out and get a taxi right now.

But I'm gonna walk out with you (on the phone) though. Don't worry, now I've talked about this movie so many times, I'm a little pro. (laughs.)

OK, excellent. Then let me begin. I'm pretty sure you've talked about how it all began many times. But for the people who don't know, can you tell me how you met the Angulo boys?

So I was walking down the First Avenue one day and these six boys walked past me. And I was completely intrigued by them. And I... you know they have like, long hair and they have this Reservoir Dogs thing happening. And I ran after them instinctively and asked them where they are from and they said Delancey Street. I told them that I haven't seen them around before. And they asked me what I did for a living and I said I was a filmmaker.  And they were like, "Oh, we are interested in the business of filmmaking."  And that's how the whole thing started. It was a very serendipitous thing.

I had no idea what their backstory was when I first met them. I thought they were really cool guys and there was this openness about them that was intriguing and.... So that's how the story started.

That's pretty wild. How long did it take for you to make the film? I mean you've known them for a long time now right?

I met them five years ago and I pretty much started filming here and there right away. And it became a regular full time thing after five month or so. From beginning to end it took about four and a half years.

It is quite remarkable how intimate the film is and the access you had into the lives of these boys. You have a group of very willing participants to tell their story and they invite you to their house to film and everything. I am wondering how their parents first thought of it, especially their father Oscar. He doesn't seem that friendly.

I think he saw an opportunity for his children. The boys really just... I mean, he didn't have a choice. They've already taken over the household- the power has shifted. So it wasn't a problem.

Did you feel threatened by his presence or ever feel that you were in any danger?

No. He'd been defeated by the time I got in there and it was a different scenario.

So you guys talked about film non-stop.

Yeah, I mean eventually we talked about life and stuff but it was a really nice friendship that we had. I didn't know about their dark stories until some time after we became friends, so it was a learning experience.

When you heard their backstory, what was your reaction? Did you see the potential for a great film?

(hailing a cab) Yes. When I first started to uncover the clues, I realized that there was a fascinating backstory to the story. But I also felt protective over it because if it was gotten to the wrong hands, it could be exploitative. So I wanted to take care of it delicately.

Did you become a sort of a big sister for them?

Yeah, I think so.

The film has a really powerful cathartic ending. Sort of film within a film kind of thing.  Did you suggest any of it or did it come naturally?

At the end in the documentary, they make a very personal movie about their lives-

Oh, no, no. They make all sorts of films all the time. We used the film that made sense for the ending. It's about what serves the narrative and I think they've gotten to certain point with that piece which is reflective of their lives.

There are six brothers and there is one sister (Vishnu) who's not really featured in the film. Was it a conscious decision not to include her from the beginning?

She is disabled. She has a Turner's Syndrome, so we couldn't interview her. I wanted to put her story within a film but the story of the boys and their first steps into the world was the main story. We tried to include her story as much as we could, but you can only tell so many stories within a film.

How they were brought up is really an interesting social experiment, when you think about it. It tells how resilient the boys are considering what they have gone through. I saw them at the Q & A session after the press screening the other day and was pleasantly surprised how well adjusted and smart they are.

Yeah, they totally are. I think it was their power of imagination- they were able to create the world they could escape to, that their film reenactments worked as some sort of therapy. Also they have a very loving, caring mother who really have been taking care of them. I think these are the reasons why they are OK.

AND they had such a drive. They knew what they will be doing and what their lives will be when they get out of the house. They knew exactly what they wanted to do. It was the first thing that they said to me when we first met on the street, "we are looking into the business of filmmaking!"

But we'll see how things will turn out for them. Their childhood might affect them in the future, who knows? We all have our problems. We all have some childhood traumas to some degree. I think their experiences were a little more intense. (laughs.)

Do you think the boys ever forgave their father?

They are estranged from their father. I think they tried but forgiveness comes from both parties and I don't think either side is ready yet. But we will see what the future holds.

I know you are extremely busy and getting a lot of attentions for this film but what's next for you?

I am helping the boys with their production company, Wolfpack pictures. I am also writing a script and continuing promoting this film around the world.

Do you feel this content is inappropriate or infringes upon your rights? Click here to report it, or see our DMCA policy.
Crystal MoselleBhagavan AnguloGovinda AnguloJagadisa AnguloKrsna AnguloDocumentaryBiography

More about The Wolfpack