Cannes 2015 Review: THE LOBSTER Starts Strong But Loses Its Way 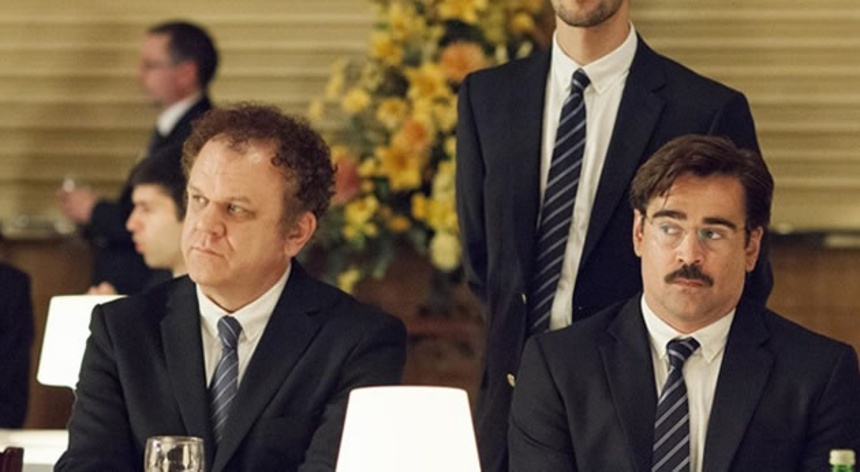 Boy, I wanted to love this movie. Really, I did. I mean, the first shot of the film is a delight - a woman is passively driving in a car. She gets out, windshield wipers still flailing away, and pulls out a gun. BANG. Down goes a horse (or was it a donkey?), legs up in the air. Another of the animals walks over to examine the equine corpse with a mix of sadness and wonder as the woman walks back to her car.

Thus begins The Lobster, one of the most delightfully weird films you're likely to see this year. The concept is both captivating and morbid - when couples breakup they are sent off to a hotel-like prison in order to try and find a new mate. Failure to find love results in them being operated upon and set free into into the wild as the animal of their choosing.

And so, for the first hour or so I was enjoying the hell out of the thing. With surreal dance sequences, bizarre courting rituals and Kafkaesque pantomimes about why people shouldn't be single, the film is an exercise in surrealism and silliness. There's a deeply dark undercurrent, yes, and the metaphor is laid down thickly, but it's all pretty captivating.

Colin Ferrell looks positively pedestrian with his Lego Minifigure-like hair and preposterous mustache, and his companions (including John C. Reilly) are equally daft and awkward. A voiceover narrates as a flashback, providing insight into the goings on as things get weirder and darker.

And then, frankly, the film loses its way. It goes to a very dark place, one that immediately will turn many audiences (spoiler: a woman kicks a dog to death, her leg covered with blood and fur as she chases the main character). We're led to this particularly gruesome place, but the film takes a very strange turn at this moment, turning into an even weirder kind of romantic courtship.

The killing of a dog is usually done for cheap effect to rile an audience, but occasionaly (think Tyrannosaur) it's completely in keeping with the tone and intent of the film. Here the shock isn't so much that this event happened, but more that the film never quite moves on in a satisfying way from that spot. Things get dark, sure, but never darker, with other aspects of brutality either hinted at or done offscreen. It's as if this central moment knocks the film off kilter, and the filmmaker is never able to right the ship.

A film like, one that should be so close to my heart, hurts even more when it doesn't work, as I was so rooting for it from the beginning. There's a sense of deflation as things unwind, like the smatterings of ideas refuse to coalesce into anything than an audience can hang onto. Yorgos Lanthimos is a talent, it's no doubt, yet here the film simply loses its way, unsure tonally how to play out intimacy or violence, unsure who to tie the film on.

Like the horrifying butchery alluded to in the "transformation room", we've got a lot of mismatched spare parts here all Frankensteined into a ungodly, unwieldy beast. Let's be clear - I adored the film's ambition, and it's clear I've never seen anything quite like it. I was captivated with its matter-of-fact hunting of ponchoed forest dwellers, with its scathing look at the hypocrisies of power. I was smitten by a blonde pony with pretty hair. The scene in the hot tub is amazing. I liked very much watching people make out while listening to gypsy music being strummed.

Yet I fear we're left with a shell of a film, and my ambivalence pains me. The Lobster at first taste so enticing but one that turns bitter towards the end of the meal.

In many ways this is a beautiful failure, even an entrancing one, but it's likely a failure nonetheless: Failing at keeping momentum going to the end, failing at finding the right tonal balance, failing at being concise and nonindulgent. But oh it's a lot of fun when it's getting things right, and that might be enough for some.

So unlike many misfires, I think very much it's a film worth seeking out. Its madness, at least for the first few acts, is a delight. There's so much richness of detail and quirky little asides that that might be enough. Its faults, and there are many, may be softened through a second viewing where worries about narrative drive are lessened.

Yet, as the film demonstrates most vividly, I must be honest and not conform my feelings to expectation or convenience, overlooking faults that are egregious in order to take perhaps the safer option and simply settle. This Lobster has the trappings of genius, and so its with a little despair I found myself in the end simply not compatible in matching with it for its entire run.

As for the film's many ideas, love may be blind, but one can't be blind to the way the film shoots a bunch of metaphors and critiques of love and tries in vain to get as many darts to hit their mark. There's perhaps too much here, too many creatures skinned and flayed, too many directions taken. It needs a bit more guidance, a bit less flightiness, and we'd have had something for the ages.

On first blush, however, The Lobster proves as a whole unsatisfying. And that, for a film like this with so much going for it, is a real and palpable shame.