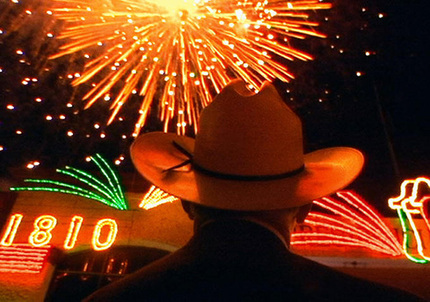 The Ross Brothers' 2012 film Tchoupitoulas showcased Bill and Turner's proclivity for visually arresting imagery, compelling yet dreamlike narrative flow, and a keen eye for the undercurrents that run below the more obvious stories that have flooded from post-Katrina New Orleans.

That film was a hybrid of documentary and semi-narrative fiction, while their latest film, Western, is far more traditional in its construction. The winner of a special jury prize at Sundance for its "verité" qualities, there's something almost old-fashioned in the way that these boys tackle this new, remarkable American story.

Their focus is on a Texan border town that on the one hand exemplifies every stereotype one may have about the environs, while simultaneously bursting almost every prejudice that many feel about this region. It's this sophisticated ambivalence that makes the film so effective, trading not only on our expectations but finding a series of characters that through their unique stories provide a truly universal message.

With quiet and confident patience the film unfolds in a way that easily could have gone the way of repetition or dullness, but remains throughout incredibly compelling. Eagle Pass, Texas, along with its sister city Piedras Negras, Mexico, are conjoined in immeasurable ways, with generations of settlers doing business across the Rio Grande, and finding commonality and community despite growing political and rhetorical hostility on both sides.

Yes, the primary characters are American, and both central characters appear straight out of central casting. The mayor Chad Foster speaks with a steady drawl and can wear a brimmed hat without irony, while cattleman Martin Wall walks with a cloud of dust in his trail, as if he's literally part of the land which he calls home. Yet both hold tremendous connection to the other side of the divide, with their livelihoods in many ways intertwined in this symbiotic relationship.

It's no accident the Ross Brothers have named their film after a genre - like the best Westerns, the film feels like both a morality play and an analogy for the entire American experience. As the desperados near, and government forces regulate the commerce over the border, you can witness from the experiences of these individuals the highly complex and ambivalent state of affairs in this border town.

The film works its best when we as an audience become immersed in both the awesome landscapes and the sheer humanity of the participants. The direct-cinema style works beautifully here, drawing us into the circumstance and leaving any sense of editorializing or manipulation off to the side. Sure, it's a film made by savvy participants, but at its best the film feels like a real mirror into the heart of this situation, a decidedly non-dogmatic or polemical look at events that belie the hysteria of talk-radio or the banality of congressional furor.

Western is a powerful and engaging film, a deftly presented and accomplished piece that yet again firmly establishes the Ross Brothers as exemplary talents of non-fiction cinema. Its subject matter dovetails beautifully with another knockout of a film from this season, Cartel Land. While Western is a much more quiet, contemplative piece, and Cartel Land a more overt yet immensely compelling work of bravado and journalism, seen together the two films manage to provide a much needed sophistication when it comes to the current state of relations between the U.S., Mexico, and the scourge of drugs and violence fueled by the Cartels and tied to American consumption.

Equally ethereal and energizing, Western is a top-notch doc, providing unique insight into the remarkable situation befalling the people of this frontier town.

Do you feel this content is inappropriate or infringes upon your rights? Click here to report it, or see our DMCA policy.
SXSW 2015the ross brotherswestern