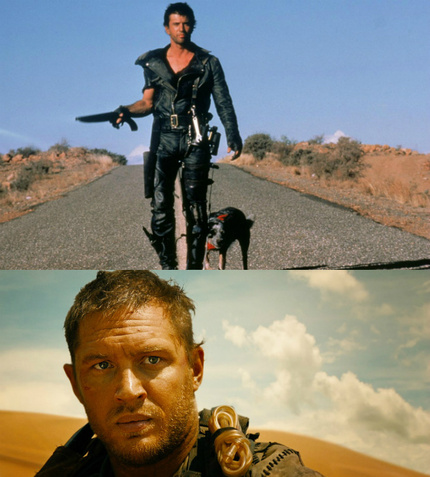 Seeing George Miller walk out on stage to introduce The Road Warrior made all my pains go away.

A medical doctor turned filmmaker, Miller may not have magical healing powers, but his movies have the capacity to make audiences forget about their troubles, at least for the length of the running time, and that certainly applied to me. In his introduction, Miller recalled that he and his writing partner (Terry Hayes) began working on the screenplay in San Francisco, at Christmastime in 1980, continued working on the drive to Los Angeles, continued working on the plane home to Australia, and then finished it up. A year after they started on the script, the movie opened in theaters in Australia, which is indeed remarkable.

Miller also informed the crowd at the Paramount Theater in Austin that he would be watching the film with us, from beginning to end, for the first time in 33 years! And then the lights went down, and it was wonderful to be held spellbound again; every time I see it, I find myself involved as Max struggles to remain separate and apart from humanity, still grieving from the devastating loss of his family. His personality has changed dramatically but he still has some of that cocksure attitude and the yearning in his eyes to get the job done, whatever that may be.

And the action sequences remain stunning, a magnificent leap ahead of Mad Max in ambition and execution. Once again, I felt my body thrumming as Brian May's brilliant, bombastic music kicks in and the pace steps up and up and up, my breath growing shorter and my toes tapping on their own.

Afterward, Drew McWeeney of Hitfix.com stepped onto the stage to reintroduce Dr. Miller, who received another standing ovation. Miller confessed he felt a bit "bewildered now," since he had finished the final cut of the upcoming Mad Max: Fury Road just two nights ago, and the two were whirling through his brain.

In answer to questions posed by McWeeney, Miller noted that the Feral Kid (Emil Minty) was an orphan boy who stood out at his audition. He has fared well as an adult, ending up as a successful jewelry designer. Miller also remembered how they chose Mad Max's dog; he and an animal trainer went to a dog pound and chose from dogs that were on 'death row,' as it were. Miller didn't feel comfortable with that aspect, but the dog they picked stood out for his ability to pick up a pebble, and then retrieve it if the pebble was tossed.

Miller said that all the characters had backstories in mind; it was something that people beyond the actor needed to know about, influencing their dress, hairstyle, makeup and, so forth.

We were then treated to a scene from Mad Max: Fury Road, in which Max (Tom Hardy) is found chained to another man in the wasteland, and then has an encounter with Furiosa (Charlize Theron), along with a few other women who look suspiciously like supermodels.

It was a bit off-putting in the first few moments, especially after watching The Road Warrior but putting aside the differences in how the two movies look -- obviously, one is new and the other is more than 30 years of age -- they share a similar feeling of intensity, and the new movie appears to emphasize action far more than dialogue.

It was only a few minutes of footage, which was a disappointment to those who were hoping for a longer look from the movie, which is due out in theaters -- in 3D -- on May 15. Still, it was reassuring for those of us who really want to see another action extravaganza in the wasteland, and a special trailer that was shown -- supposedly cut just for the SXSW screening and another one to come in Las Vegas -- certainly whet my appetite further.

In a word, it looks "awesome." As Miller said, it's similar and includes "callbacks" to the original movies -- in reality, he had forgotten they were repeating gags they had already used -- but he assured that the movie is not just a total rerun. We'll have to wait a while longer to see if the movie delivers as a whole.

Between the clip and the trailer, Miller took questions from the audience, starting with Robert Rodriguez to ask Miller 'how he did it.' Miller graciously complimented Rodriguez and then declined to answer the question! He recalled, however, that he watched Mad Max and thought of everything he couldn't do on that movie. Then the production of Mad Max 2 was so frenetic that much of it came from his gut.

Among the other answers given by Miller, he said it's always important in movies to pay attention to the subtext; the movie is a mosaic. About the setting for the movies, he noted: 'Just because it's a wasteland, it doesn't mean it can't be funny. And desperate people can still make beautiful things.'

Watching The Road Warrior again on the big screen was a fantastic experience, and I can only hope that Mad Max: Fury Road will come close.