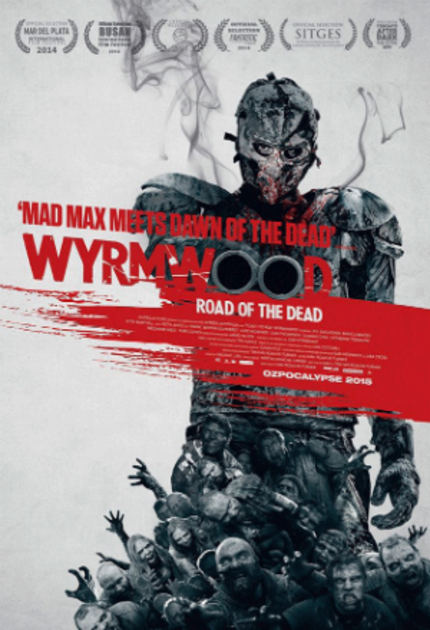 As a former resident of New York City, I feel your pain, and I have some relief. (It's called Wyrmwood: Road of the Dead, and it's from Australia, and it's mighty enjoyable, and we have had tickets to give away, but let me finish my story first.)

It's the dead of winter and there is absolutely nothing to do except bitch about all the layers of clothing you have to put on so you can descend into subway stations and clomp onto trains that take you to jobs that you hate and don't pay you nearly enough to avoid having to live with four other people in a tiny apartment that never has enough hot water.

But I can offer you a temporary respite, if you can take off your winter gloves long enough to send an email to me as I sit comfortably in Texas, luxuriating as I live alone in an apartment that is no bigger than yours, yet is far, far cheaper than yours. And that respite is named Wyrmwood: Road of the Dead, and we have had tickets to give away, courtesy of the good people at IFC Midnight.

(NOTE: The giveaway is now concluded. Thanks for all who entered!

In total, 10 people will receive passes; each pass will grant admittance to TWO people to an advance screening on Monday, February 9 at 7:30 p.m. at IFC Center. (If you are a TRUE New Yorker, I trust that you know where the IFC Center is located and how to get there, even if it's snowing and you must walk there from Staten Island.) All you have to do is send us an email with your name and confirm that you will be able to attend the screening and that you want to watch an awesome, apocalyptic Australian horror-comedy. We'll select 10 people at random from entries received by 11:59 p.m. E.S.T. on Sunday, February 8, 2015.

If you're still on the fence about seeing this movie in advance of its opening on Friday, February 13, here is a snippet of my very positive review from last year's Fantastic Fest:

"Wildly apocalyptic with dollops of silliness, Wyrmwood proves to be a splendidly gritty affair, a tale that feels like it's being told from the back of a jeep as it races away from doomsday on a very bumpy road in Australia.

With that in mind, Wyrmwood wins points for originality, introducing a couple of zombie concepts I've not seen before that tie in well with the story and characters, helping to give the narrative a fresh spin."