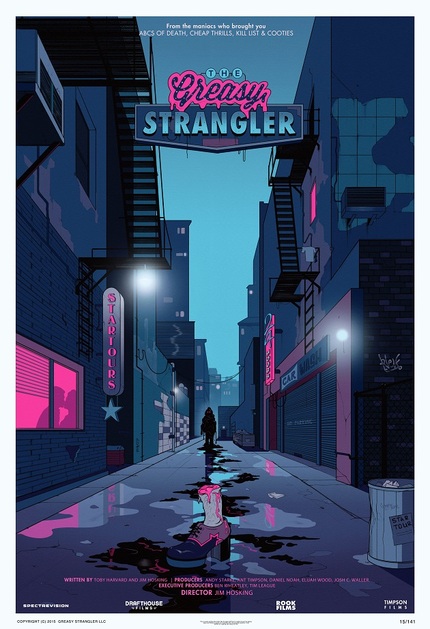 I've asked enough people who make their living in film, and they almost all agree that it is great when you can work with your friends. Sure, there are other instances when working with your friends has ground potentially awesome projects to a halt but let's focus on the positive here. And Deadline had news that is very, very positive indeed.
Great things happen at film festivals, Over the years the friendships that have developed from the crowd at Fantastic Fest have given us those now infamous and not-so-helpful-with-Spanish-class horror anthologies The ABCs of Death. Once again Ant Timpson's Timpson Films and Tim League's Drafthouse Films will work together on a new film. And this time around they are bringing on Elijah Wood and his SpectreVision banner to work with Rook Films (Sightseers and The Duke of Burgundy) to launch the feature film debut of ABCs alumnus Jim Hosking, a film called The Greasy Strangler.

The Los Angeles-set tale follows Ronnie, a man who runs a Disco Walking tour along with his browbeaten son, Brayden. When a sexy, alluring woman comes to take the tour, it begins a competition between father and son for her attentions. It also signals the appearance of an oily, slimy inhuman maniac who stalks the streets at night and strangles the innocent, soon dubbed 'The Greasy Strangler.'
"When Ant Timpson sent us Jim and Toby's script, we all agreed that it was the most disgusting, vile, and all-around grotesquely hilarious piece of cinema we'd ever read, with imagery we will likely never dislodge from our tender, greasy brains," Wood said in a statement. "And that is why it must exist!"

Hosking is directing his own script that he wrote with ABCs of Death 2's G is for Grandad writing partner Toby Harvard. SpectreVision's Daniel Noah, Josh C. Waller and Wood will produce along with Andrew Starke of Rook Films and Timpson. Kill List, Sightseers, and Doctor Who director Ben Wheatley and League will executive produce.
Everyone should have friends like these.
Sign-In to Vote
Tweet 0 Submit

Wait, Hosking did the G is for Grandad bit? Oh, I can't stop chuckling now. This is gonna be great.

Yup, that's him. Look up his Vimeo channel ... his commercials work is insane, too, and that's under the restrictions imposed by needing to sell shit. Hosking unfettered by those considerations is absolutely insane ... I've read a few of his scripts and they're all absolute lunacy.