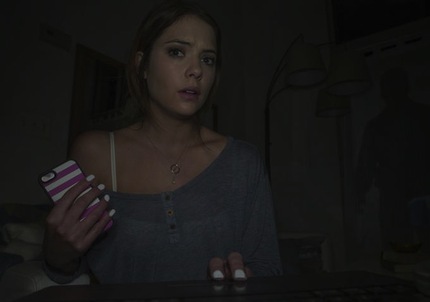 Since the very beginning of the medium, cinema has been inextricably linked to voyeurism.

For to see, we have to look.

And sometimes that's in wrong or uncomfortable places. We are, as an audience -- at home, in the theater, sitting in the dark -- eavesdropping on, while often fictitious, the lives of others.

We see. We look. Sometimes listlessly, unmoved by the often violent actions committed on screen. At other times we watch in suspense, eyes wide, as the piercing screams of some helpless young thing cut through our vertebrae.

And here you are staring into your computer or smart phone, reading my words. Perhaps you've just finished texting your sister, or checked your email, took a photo of the sun setting, or of your dog, or just video chatted with your significant other. In the digital age, these constitute as some of your most personal, private moments.

Branden Kramer's cyber-suspense story Ratter is cultivated from research done on groups of hackers trading hijacked camera feeds in underground "Ratting" communities. The film is shot entirely from the viewpoint of a smart phone, laptop and Kinect-style video game console camera being controlled and recorded by one of these ratters. What stuns about Kramer's film is the fact that this cyber world isn't one of global hacking crises and mysteries ala the recent, and abysmal Blackhat. Nor is it sensationalistic Hollywood horror using the gimmick of a laptop camera for some cheap scares. The film's strengths, why it works so much better than most cyber-centered offspring of the found footage genre or any similar ilk, is because it is grounded in a realism that is not close to home... it is home.

The object of our stalker-hacker is Emma, a graduate student played by Spring Breakers' Ashley Benson. Emma is a beautiful young woman living a charmed life in New York City thanks to an affluent family upbringing in the Midwest. She is friendly and smart. There is nothing really exceptional or odd about her. She is a nice, honest girl making it in the city. Like any twenty-something she has grown up with technology. What would she do without it? Even when she's not using her devices, they are always just an arms reach away. They're there when she meets the charming and funny Michael ( Matt McGorry) in the library. Her laptop sits on the coffee table as she and her pal Nicole (Rebecca Naomi Jones) talk about Emma's ex, Alex.

And then come the mysterious emails and texts. The phone calls. The missing photos and voicemails that never reach her ears. Is it a bitter Alex tormenting her? Is it Michael, showing his true colors? What can Emma do but change her passwords... get a new phone, get virus software. And then comes the banging on her door in the middle of the night.

Last year's Open Windows, from Timecrimes director Nacho Vigalando, was a cyber-themed race against the clock scenario shot from a laptop's webcam, careening into admittedly goofy, if also Hitchcockian levels of suspense. Kramer courts that Hitch lineage, too, wherein we could call Ratter the 2015 equivalent of Dial M For Murder. Though more often than not the measured work here recalls the early films of self-professed Hitchcock aficionado Brian De Palma. There is a tactile minimalism and clever use of repetition on display in Kramer's scripting and Shelby Siegel's editing: powerful tools to prop up and excel the viewpoint.

The rhythm for most of the film is mundane and pedestrian, made up of shots of Emma going to class, learning to cook, shaving her legs, napping, masturbating, talking to her parents on Skype. It's the ratter's choices in angle that begin to slowly build the film's suspense. One of the film's most terrifying moments comes when Emma wakes up and goes to pee. She holds her phone in one hand, checking email or Facebook. The camera catches her panties being drawn down, turns to her face, and then flips to the reverse camera and gets a shot of her bare thighs. It's a most personal moment, the kind we rarely even share with a boyfriend or spouse.

As such, Benson's turn as Emma amazes by the seemingly mere fact that she is totally believable, that she is normal. What we see is normal then, but how we see it is not. While we hold our breath for Emma, we cannot forget that we are witnessing her life entirely through the viewpoint of her stalker. This erupts a crisis of perception and morality within the viewer that builds up a fury of heavy questions around privacy and security, but also misogyny and the objectification of women. Forget the obvious adulation men hold for Emma, from her eager professor to the computer repair guy... How men hover or linger in the background of a coffee shop or at a club, is no accident in framing.

The film's greatest horror then is derived from this fact that Emma lives this relatively normal life as a beautiful, affluent white woman. In her eyes, in the eyes of society, she has done nothing to deserve this harassment, except be beautiful and young. Her relationships don't matter, her studies and opinions don't matter. She is literally lensed as an object to be desired and obsessed over. An image on the screen.

Seeing Emma in her underwear, in the shower, clutching a knife, ties into decades of horror/exploitation heroine tropes, largely conjured by a male-dominated industry. Kramer as a man and filmmaker is gravely aware of this. Ratter's consistent towing and subverting of genre, and the inevitable hot-water marriage with its ugliest faults makes for a rich, textual piece of digital cinema.

Perhaps it is through our very own denial of what will happen to Emma that our expectations consistently feel twisted... for the fact is, from the very first frame, as a computer lights up, code flashing across the screen, we know exactly where this is all going.

And there is nothing we can do to stop it. All we can do is watch.

Do you feel this content is inappropriate or infringes upon your rights? Click here to report it, or see our DMCA policy.
ashley bensonbranden kramercyber thrillerratterslamdance 2015slamdance film festival