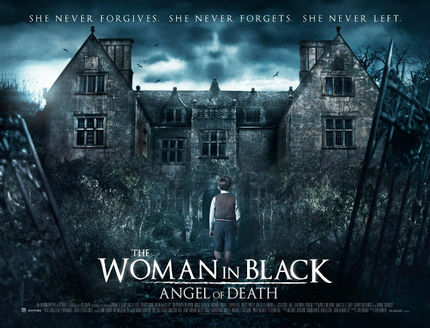 Tortured souls abound in the sequel to The Woman in Black (2012).

It's 1941, and London is under attack. Eight schoolchildren are evacuated to safety in the countryside, under the care of headmistress Jean (Helen McCrory) and teacher Eve (Phoebe Fox), a week ahead of other children who will fill up Eel Marsh House, located on a small island surrounded by marshland. Little do they know that the long-abandoned mansion is still haunted by the titular character, a vengeful soul with a special interest in children.

Picking up the story some 40 years after the events in the first film allows The Woman in Black 2: Angel of Death to introduce a new cast of characters who are oblivious to what has happened before. No local residents remain to warn the teachers about the dangers that lurk within the old mansion, save for one tight-lipped gentleman who does little more than glare at them. And with the country in a state of war, the women and children understand intuitively that their problems don't amount to a hill of beans to anyone but themselves.

In effect, the children have been abandoned by their parents, sent away from their loved ones, and so it's no surprise that they are quiet and withdrawn. The state of war is emphasized by the headmistress, who encourages the children, in so many words, to have stiff upper lips, to put up with their hardships. This is exemplified in the case of Edward, a young boy whose home was bombed the night before the group leaves London. Evidently, his mother was killed in the attack, and he has ceased speaking altogether, writing notes to express himself, but only when pressed by his teachers.

The headmistress is the wife of an officer, with grown children she avoids talking about, so whatever trepidation she is feeling, she keeps to herself. Eve does her best to exude a positive attitude, but she has a troubled past, as suggested by her manner and then demonstrated in an early nightmare, a horrible memory that she wishes she could forget. Her spirits are lifted temporarily by a pilot named Harry (Jeremy Irvine), yet he has his own anguished memories to untangle as well. 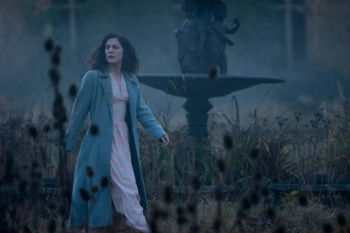 With all of these poor souls gathered together in one place, it seems a perfect opportunity for the sequel to expand upon the ghostly legacy that has already been established. Instead, screenwriter Jon Croker, working from a story by Susan Hill, sticks to what is known, which means that The Woman in Black 2: Angel of Death feels more like a remake than a sequel, offering little that's fresh or new in the story or in the potential scares.

To be fair, that's more a reflection upon Hammer Films than the screenwriter. The company made a name for itself in the late 1950s by reinventing the classic movie monsters made popular by Universal Studios in the 1930s, adding distinctive spins to the characters by making them more bloody, clever, and diabolical. Now that the company has reestablished itself in the past few years and enjoyed some success, it's once again facing the challenge of sequels.

"The Woman in Black" has a good, frightful appearance, and once again is used sparingly. It appears that the idea was to keep her the same, while introducing a new setting and group of people for her to terrify. That's a good start, but more twists and turns are needed in a sequel for it to avoid treading the same ground, which is what has happened here.

That being said, director Tom Harper follows the subtle path to horror, making good use of the haunting atmosphere created by the decrepit mansion and surrounding, often foggy marshlands, relying as much on silence as music cues to create tension. Sadly, all that good-faith effort adds up to little more than a nicely-made picture that doesn't match or exceed the more finely-turned and dramatic original in suspense or quiet thrills.

The Woman in Black 2: Angel of Death

More about Woman in Black, The