Blu-ray Review: The Ghost In THE WOMAN IN BLACK is Kind of a Jerk 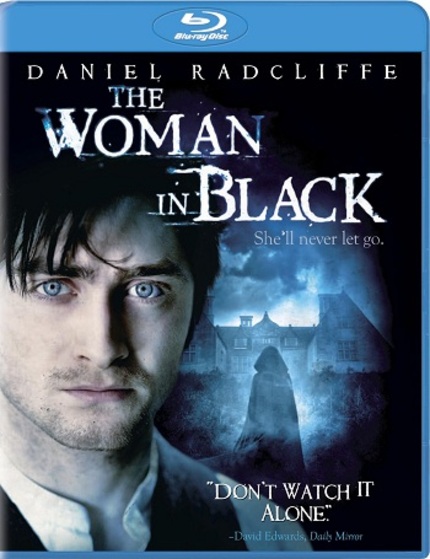 If only the isolated village where James Watkins' The Woman In Black is set simply took the time to put up warnings in front of the imposing manor where the titular vengeful spirit dwells, things might have worked out better for everyone involved. Nothing too complicated, a simple "Stay away, ghost within who causes misery, kills children" would have sufficed, non-believers be damned. Unfortunately, as written by Jane Goldman's (X-Men: First Class, Kick-Ass) script, they're a taciturn bunch straight out of a mid-60's Hammer picture, and they'd rather give a stranger in town like grieving solicitor Arthur Kipps (Daniel Radcliffe) the stinkeye than give him a clear, reasoned warning about why he needs to stay the hell away from that house. Nevertheless, to the house Kipps goes on a last-ditch effort to salvage his legal career some four or five years after the death of his wife during childbirth. Kipps loves his young son, but you can see that it pains him to look the boy in his face (although Goldman's script goes the unnecessary extra step of having Kipps say with a hint of heartbreak that the book shares his mother's features--a look would have been enough). Arthur is to examine the contents and papers of the musty, abandoned Drablow manor.

An interesting feature of this ramshackle, unloved house: a muddy road leads up to it, but the very same road is washed flooded at dusk with the tide. This will of course be important later, as well as the death of the son of the owners of the house who seemed only to happy to give the boy just the most ghastly windup toys that nightmares can conjure. It's not too long before Arthur sees the titular ghost and tragedy strikes and children start dying in grisly ways, and gradually, The Woman in Black becomes Arthur's race against the clock to solve the mystery of the veiled ghost.

Beyond all of the clanging, banging, shrieking, and generally ramped-up effects (including some dodgy-looking fog) in The Woman In Black, there's a pretty interesting horror movie about grief and faith, but those tensions are pretty much undercut by the the action of the film. Arthur destructively wants to believe there's something beyond our world, some connection between himself and his dead wife, and during a scene on the train heading out to the village, when it seems like he considers consulting a psychic along with later confrontation between Radcliffe's character and a grieving mother who believes her dead son talks to her set up this tension, but it's pretty much undercut early on when he see supernatural manifestations plague our hero.

This is essentially a thrill ride horror movie, so don't go looking for sustained dread or terror to follow you out of the theater. The titular spirit is a spring-loaded ghost who pops out at opportune times accompanied by a loud music sting or sound effect. The motivations for the ghost don't really go far beyond, "she is angry, crazy," meaning there's no real thematic link to the rest of the story as some of the best angry ghost stories seem to have.

The Woman In Black is slickly produced as far as that goes, but don't look for this malevolent spirit to haunt your dreams after you've seen this movie.

This is the second review I've written recently complaining about how loud a movie is, but yeah, The Woman In Black is an assault on the ears, served well by the 5.1 audio. There's a deep rumble to some of the action which you'll feel in your gut, the click-clack of the wind-up toys which will surround you as you watch Radcliffe enter and get lost in the house of horror.

Visually, it's a rich, just lush experience of deep blacks and at some points warm, flickering match light. This is a very pretty movie.

You've got a feature-length commentary by the movie's director and writer along with two making of featurettes.

The Woman in Black is available on DVD and Blu-ray now from Sony Pictures Home Entertainment.