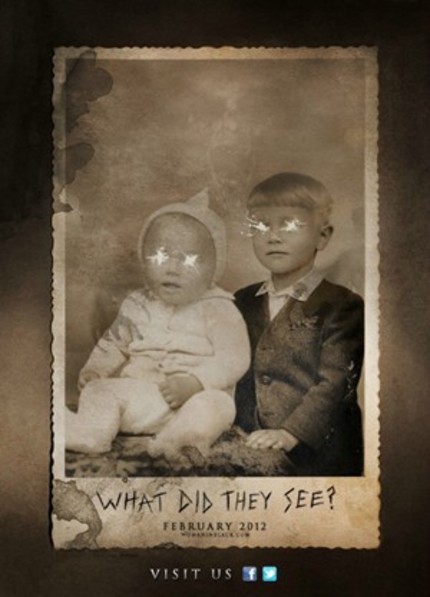 To say that The Woman In Black is a throwback to an old style of British thriller doesn't quite do it justice, but it's at least a decent starting point for conversation about the work. From the first moment we see the revivification of the Hammer moniker show up on screen we know that this picture at the least stems from the same tradition as the films that made the likes of Christopher Lee and Peter Cushing international stars.

It should also be noted that the film is based on an extremely popular pulp novel by Susan Hill, which was turned into a play that's the second longest running in West End history (next to, of course, the ubiquitous Christie play The Mousetrap).

Oh, and it's the first "adult" role by young Mr. Daniel Radcliffe, he of the film-series-that-shall-not-be-named.

The Woman In Black is the story of a lawyer who must travel to a damp coastal town in order to settle the affairs of an recently deceased client. Upon arrival in the town, he quickly discovers that things are a bit kooky, with, among other things, a run of child deaths plaguing the community. Traveling to the house of his client, while riding across a causeway that floods every change of tides literally trapping the house on an Island of its own, he encounters a strange vision of (wait for it...) a Woman in Black.

So, yeah, it's a haunted house/ghost movie. You've no doubt seen hundreds of them, yet this one does manage to elevate the source by being extremely stylish. Forgiving the ubiquitous use of scare score (blasts of horns or strings to startle, often with little effect) there's some excellent creepy imagery the film manages to convey. In particular, there's some truly insane Victorian era windup toys that they managed to scavenge (apparently from one lone American collector) that are shot particular well  - a scene where the candle light makes one toys eyes come alive as if their pupils are moving is particularly effective. I've not been this creeped out with windup toys since Blade Runner, and they're certainly the most visually compelling part of the entire piece.

While there's a capable supporting cast, including the ever underappreciated Ciarán Hinds, this really is Radcliffe's movie to run around in. A great deal of the film consists of Daniel traipsing through spooky rooms by candlelight, and he certainly seems up to the task of carrying the film on his own. I've got no hate for the man or his performance, and found I was able to appreciate his work without any baggage from the films-that-shall-not-be-named creeping in. The sheer hoopla surrounding his involvement will no doubt shape audience expectations of the work, but I think as a standalone performance he's absolutely up to the task.

Beside the obvious cliché elements, there are quite a few genuinely disturbing scenes, and the film's pitiless execution of a number of children throughout the film (sometimes in graphic detail) at least show that it's unafraid to actually commit to the type of tale it's trying to tell. There's a great moment of tension trying to dig a body out of a bog, and of the dozens or so shock reveals there ended up a few that caught me.

The script by Jane Goldman (Kick Ass, The Debt, X-Men: First Class) continues her run of literate, often literary genre pictures.  I managed to track down the earlier filmed production (made for TV, and closely based on the play) and was surprised just how much this work diverges from the early work. Almost everything has changed, including the ending, meaning those familiar with the former will find a very different experience with this work.

The Woman In Black is a horror movie for those that never go see them, a perfectly fine, serviceable thriller. Radcliffe has chosen an interesting genre piece to make his foray into adult cinema, and I continue to be interested in what choices he'll make in the future. Regarding this work,  it compares favorably to the likes of James Wan's Insidious, and is miles better than The Innkeepers which I also screened this week. A scary movie for people that often don't go to scary movies, it's well worth a look, but may not hold enough interest for those more entrenched in more visceral, explicit or brutal genre pictures.

"but may not hold enough interest for those more entrenched in more visceral, explicit or brutal genre pictures."

What an odd thing to say. I don't think anyone who is only into more visceral, explicit or brutal genre pictures is going to bother seeing a PG-13 period ghost story starring Harry Potter.

It may be oddly expressed, but the key is "entrenched" - for those genre fans that are dogmatic about what constitutes a scary movie, sure, this won't be their thing. I meant it a bit more than that, if written poorly - I think there are moments in this film that are genuinely creepy (read: scary, disturbing, unsettling, etc.) without ever resorting to explicit gore, and those that are quick to dismiss it in a kneejerk way as, erm, a "PG-13 period ghost story starring Harry Potter" will actually miss out on something quite decent. This is no masterpiece, but they've done pretty interesting things reworking the story, and there are bits of it that really are quite terrific.

To toy with your analogy, my point was to suggest that people who only like their comedies to be like THE BURBS are missing out by not giving something outside their comfort zone a chance due to preconceptions, like, say, a Coen Brothers, or a Solondz film, and so on. Similarly, those that -only- go for cerebral or quirky comedies may never be open to something as magically terrific as, say, JACKASS 3D.

This film has so much damn baggage that it works both ways - HP fans will be disappointed that this is nothing like the saga (just as some NOTEBOOK and FAST/FURIOUS fans were outraged by DRIVE), and those that would eat this thing up if it were made 40 years ago and had Christopher Lee in it will dismiss it based on the trailer as fluffy crap.

I'll let you decide if you liked it or not - I'd say it's worth a look, that it shouldn't be dismissed outright because of the rating, or the star, or because one thinks that in order for something to be thrilling or scary it needs to be bloody and gruesome.

In the end, I'll simply admit that I've never seen THE BURBS. It looks terrible, and, frankly, I never see films like that... I mean, cummon, Tom Hanks? That guy was on BOSOM BUDDIES.

No mention of the (so far) definitive film adaption of the novel from 1989...?

"I managed to track down the earlier filmed production (made for TV, and closely based on the play) and was surprised just how much this work diverges from the early work. Almost everything has changed, including the ending, meaning those familiar with the former will find a very different experience with this work."

That production was actually a made for TV "film" - as I mention in the inteview also here on the site, it starred Adrian Rawlins, who played Radcliffe's dad in the "other" films, and it was shot the year Daniel was born.