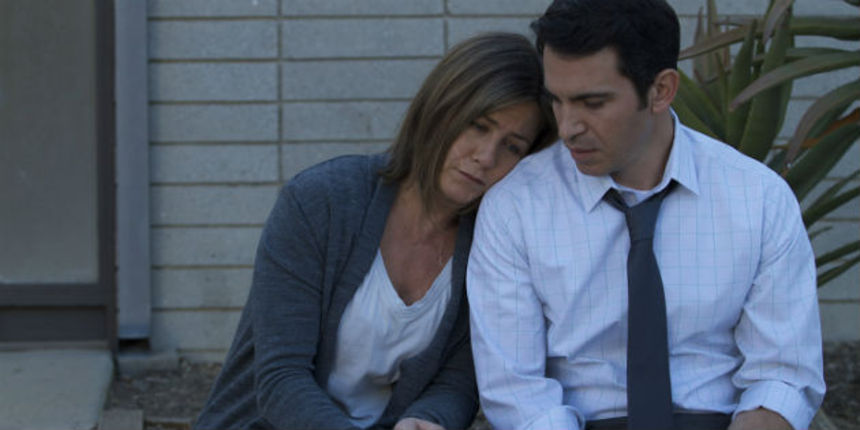 "I hope you're ready to be depressed," whispered the person sitting next to me to no one in particular as the opening frames of Cake started to roll. Indeed, director Daniel Barnz's film about a woman confronting debilitating pain, drug addiction, and suicidal thoughts in the face of unimaginable tragedy does deal with some pretty dark subject matter. But through all of this, Cake is never actually depressing. Sad, sardonic, and perhaps emotionally draining, but it's not depressing.

The success of the film rests on the shoulders of star Jennifer Aniston. We meet her Claire in the lowest of places, kicked out of her chronic pain support group for her caustic attitude. It's suggested Claire might not have been a pleasant person to begin (she's an attorney), but a mysterious tragedy (the details of which are revealed over time) has left her covered in scars, constantly in pain, and alone in life. This adds up to a personality that can only be described as a righteous bitch.

Claire's only company is her housekeeper Silvana (Adriana Barraza). The yin to Claire's yang, Silvana genuinely cares for her employer, but receives mostly brusque orders in return.

We've seen Aniston play characters with a certain sardonic wit in the past, but Claire takes it to a new level. Aniston is excellent in an incredibly difficult and physically demanding role. Claire is still beautiful, but with little makeup, Aniston looks her 40-plus years. This is comforting, in a way, and brings a greater humanity to a character that is rather difficult to like.

The plot hinges on the ramifications of the suicide of Claire's fellow pain sufferer Nina (Anna Kendrick). Nina visits Claire in opiated dreams, tempting her to end it all, her perfectly manicured beauty contrasting with Claire's disheveled state. Out of some unknown compulsion, Claire also visits Nina's widower Roy (Sam Worthington) whose numb acceptance of Claire's bad behavior lends Claire some small comfort.

While it never avoids the dark places of Claire's psyche, Cake has many very funny moments as well. A good amount of the comic relief comes from the support group leader played brilliantly by Felicity Huffman. Chris Messina shows up as well as Claire's estranged husband. The supporting cast is excellent (in particular Barraza), but there is no doubt this is the Jennifer Aniston show.

It's a tough balance to get a film like this right and much credit goes to director Barnz, writer Patrick Tobin, and editors Kristina Boden and Michelle Harrison. This movie is a tough sell. But if audiences buy, they'll receive some powerful performances and honest, emotional storytelling in return. Just be ready to see people depressed -- at least on screen.

Do you feel this content is inappropriate or infringes upon your rights? Click here to report it, or see our DMCA policy.
Anna KendrickDaniel BarnzJennifer Aniston