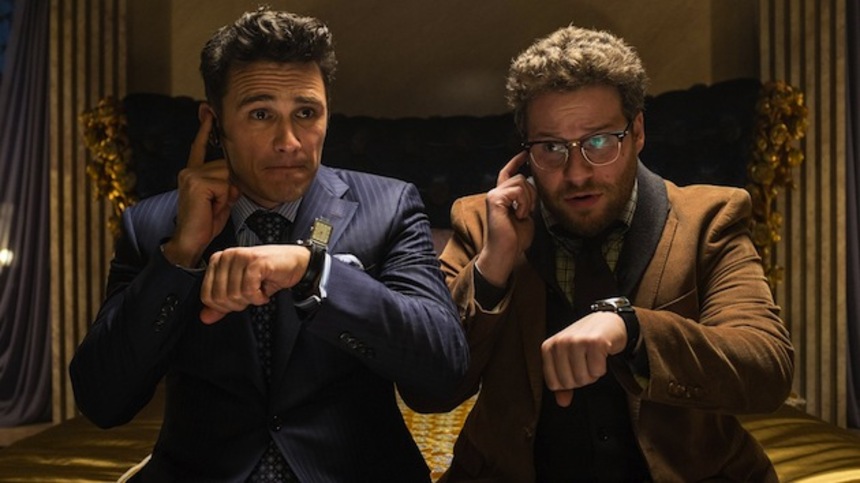 4:50 PST UPDATE: Sony Has 'no further release plans for The Interview', including VOD or DVD/Blu.

It started with the infamous hack into Sony servers last month. Then vague threats towards attacks on theaters that would show it. And despite top U.S. Officials citing there was no concrete evidence of an impending attack, like flies dropping dead, every major North American theater chain said they would not screen it.

Now Sony Pictures has officially cancelled the release of Seth Rogan and Evan Goldberg's The Interview, an admittedly goofy account of American TV personalities (played by Rogen and James Franco) who are tasked to kill the leader of North Korea. A new milestone in the history of cinema has been marked today, folks.

Here's Sony on the subject at hand:

In light of the decision by the majority of our exhibitors not to show the film The Interview, we have decided not to move forward with the planned December 25 theatrical release. We respect and understand our partners' decision and, of course, completely share their paramount interest in the safety of employees and theater-goers.

On top of that, sources far and wide in the entertainment world are saying the U.S. Justice Department are teetering on the precipice of making an announcement to the public, stating that it is indeed North Korea who is responsible for the cyber attacks and further terrorist threats.

I never would have dreamed that Freaks And Geeks' own Daniel Desario and Ken Miller would be involved in provoking one of the most extreme, absurd twists in our digital world. A movie that no doubt has a provocative premise, but is clearly a cartoon, one big joke, has provoked what is regarded by some (that'd be Pyongyang) as an... Act. Of. War.

What comes next for the film itself proves to be tricky, though I think there is one clear option and it ain't pretty for us moviegoers. While a VOD release makes sense for films that stir up certain kinds of controversy, I don't think this is likely the case with The Interview, simply because a cyber attack has already been proven near-devastating to one major multinational company, so I doubt cable and internet services would be willing to risk a further assault on their own turf.

So yes, while this is absurd today, a part of me thinks cyber attacks of this nature will become more common place as the world hums on into its LED lit twilight. Do you have thoughts on all this? Of course you do, leave a comment below.

In the meantime, our own Jason Gorber will be reviewing the film... right about now.

Do you feel this content is inappropriate or infringes upon your rights? Click here to report it, or see our DMCA policy.
cyber attackjames francoseth rogensony hackthe interview