Review: THE INTERVIEW Deserves To Be More Than A Footnote 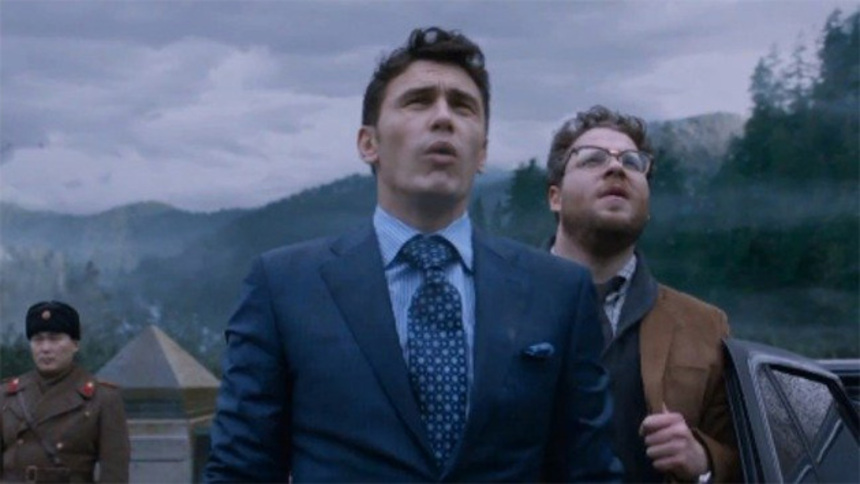 In 1940, just months after Wermacht tanks rolled over their borders in lightning strikes, a film came out that made the elected leader of Germany look like the fatuous lunatic that he was. Playing both the Jewish Barber and Hynkel, the dictator of the fictional land of Tomania, Charlie Chaplin cheekily took the piss of the Führer in The Great Dictator. It didn't hurt that Adolf looked kind of like Charlie, complete with that iconic 'stache, but the film nonetheless was equal parts slapstick and profoundly wise. It's a pure form of satire, one that decades later continues to resonate.

Now, Seth Rogen and Evan Goldberg's The Interview isn't quite up to the Chaplin level of excellence, but it does do something that even the former film never did, taking on a living dictator directly, and doing so with an even more arch plot by wondering what would happen if a couple of dingbat entertainment reporters gained the interview of the decade, being allowed into the secluded country to chat with Kim Jong-Un.

Oh, and by the way, while they're there, the CIA would like it if they killed him.

It's a silly idea, no less ridiculous than when Team America: World Police showcased the current leader's father Kim Jong-Il as a serenading psychopath with a lisp. Sure, it's a more salacious idea in some ways, the (attempted) murder of a sitting world leader, but it's clearly done in a way that's completely ridiculous. James Franco's character is an idiot and played as such. He gets sucked into the charisma of the dear leader, finding his company engaging, and buying (if briefly) the narrative of the DPRK as some kind of wonderland.

Rogen plays the hapless producer, the one who wants to one-up his 60 Minutes-working colleagues and give his hapless host Skylark something for which to fly with. When he hears that Kim is a fan, the stage is set to schlepp to Korea to work out the details.

There are love interests, silly basketball games, and plenty of dick and fart jokes. Yet behind the ridiculousness is a kernel of sophisticated satire, and within that kernel are more dick and fart jokes. Basically, this is a clever idea for a silly comedy, one with a bit of bite but overall pretty straightforward. When things devolve into Chuck Norris-like explosivity, it's really hard to take much of it as anything more than casual entertainment.

So, yes it's satire, but it's no more biting than what you'd see on episodic television. The violence and "adult situations" may be a bit less chaste, but even they are hardly the stuff to get shocked about. Overall, the Americans come across as clueless boobs, the heroes are those within North Korea fighting for a better country, and it all kind of works out exactly as you'd expect, all told in one entertaining, if slight, motion picture.

Which brings one, of course, to the metatextual stupidity surrounding this film's release. For, as of this writing, every major theatre chain in Canada and the US has balked at showing the film. This is tied to a massive hacking scandal that has brought Sony (the film's studio) to its knees, seeing the release of untold numbers of private documents and the illegal distribution of films not yet even released in theatres. Just yesterday, the threats escalated, and allusions to 9/11 and other violent attacks understandably made the chains reconsider the release.

This is shit for several reasons. First, while completely understanding the reactions of those theatres that simply didn't want the headache or excuse for any lunatic out there to make a point, this film simply doesn't engender this type of drama. It's a fun film at heart, something that prima face is kind of silly and ridiculous. To take the politics of the film seriously is frankly ridiculous, no less astounding than when the Iranian police found Maziar Bahari's appearance on The Daily Show somehow indicative of his role as a U.S. spy.

The Interview is a farce, a satire dreamed up by a couple of witty Canadian Jews who along with Dan Stirling, a writer who has worked on both The Daily Show and South Park, crafted a little bit of fun with a political bent. The fact that this film is now inexorably tied to this other bullshit is infuriating, if only for the obvious chilling affect it's likely to have on other mildly edgy products that come out of the Hollywood system. There will be millions lost on this debacle (one that as easily could be the result of disgruntled douchebags calling for "ethics in game journalism" as it could be the work of agents of North Korea, although the latest news this evening is pointing to the latter). 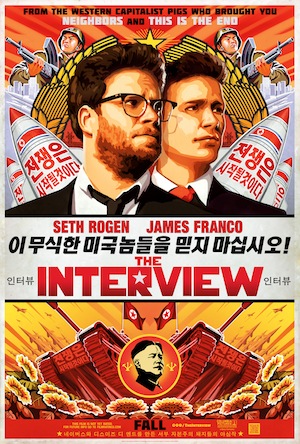 The film has the bite of a quirky Saturday Night Live sketch or segment on The Colbert Report, but save for its explicit challenge to the cult of Kim in North Korea, there's really little that could even be considered shocking or tasteless. I'm aware you need a bit of a stomach for this stuff, but the more ridiculous notions (Kim's lack of anus, for example, or his ability to talk to dolphins) is actually based on stories that have come out of the nation.

Let's be clear, the most offensive and most darkly comical element here is the current state of North Korea's leadership itself. Yes, the film could have done like Chaplin and chosen a fictionalized version, but much of the film's bite comes exactly from the fact that is an actual nation state that continues to perpetuate some truly abhorrent things while its leader looks lovingly at oozing lube.

The Interview is pretty good. It's nowhere near as funny as, say,This Is the End, or even Neighbours. It's funny, and has moments that are really kind of great, and others that take a long time to get to where you kind of know they're heading.

But thanks to the bullshit of the last few days, little of that matters. This film has in some ways already become kind of iconic, a work that will be remembered more for being pulled (temporarily?) because of anonymous threats. Real damage has been done, not just in terms of financial impact on the studio, but in terms of just what this means for works of this ilk moving forward.

Maybe this won't affect the likes of Sacha Baron Cohen, who seems particularly fearless with whom he chooses to skewer. Maybe all this will blow over and things will get back to normal, where we can make fun of a ridiculous situation by making something ridiculous for us to be entertained by and, perhaps, have a discussion about. For now, we're left in limbo, with most screenings cancelled even for press.

However, I doubt it. I think this changes lots, and not in a good way.

I saw the film last weekend at the Alamo Drafhouse in Austin as part of Butt-Numb-A-Thon. Seth and Evan came to show the film and stayed for a Q&A. I asked, inelegantly, whether they could give an "off the record" response to how all the hullabaloo around the hacking has affected how they feel about the film. I was trying to get at what it must feel like for the ridiculous (the North Koreans taking this film seriously) to move to the actual (hacker pricks making life miserable) from what is at its heart a simple, almost sophomoric idea for a film. They gave a decent answer, but I couldn't help but notice a bit of hesitancy.

A few days later and all press interviews have been cancelled once the taunts moved to actual promises of physical harm for Rogen and his colleagues.

I feel for these guys, because this is exactly the kind of dumbshit idea I cherish. I love the idea of colliding the profane with the profound, and even if the film doesn't always quite work, I applaud the chutzpah to make it happen. I want more, not less of this stuff, more idols smashed, more balloons pricked. It's when we can't make fun, when we can't laugh in the face of the bully that we've lost something precious.

The Interview may not deserve the attention it's now getting, but it does deserve to be more than a footnote in cinema history. It's a film that's funny and engaging, and one that when you have a chance to see it you should pay your money and go. There's some serious stuff going on here about this film and the reaction that has resulted, and rather than just fuming on social media it may be time, if you wish, to take a stand and watch the film with a group of friends. The biggest 'fuck you' to anyone trying to silence art or prevent people from seeing something challenging is to double down and give it a chance.

Inadvertently, the circumstances surrounding The Interview have turned the table around. We're forced now to ask questions of ourselves, rather than simply watching something ridiculous play out as a holiday trifle. Under the baggage and drama of the last few weeks, there's a charming little film there to be enjoyed, one that I hope many will eventually get to see.

Maybe in a few weeks this will all feel like a bunch of nonsense, but for now the state of this comedy feels quite dramatic indeed. I hope you get a chance to see the film, ideally in a theatrical environment (pimping it to strictly VOD seems as much a kowtow as anything). Let's kvetch about the film, let's argue whether it's good or bad, funny or stupid. But let's collectively find a way to see this film in order to have that conversation, if only to silence those that wish to silence others.

Do you feel this content is inappropriate or infringes upon your rights? Click here to report it, or see our DMCA policy.
Evan GoldbergJames FrancoNorth KoreaSeth Rogen