Al Young
Contributor
Tweet Post Submit
Last month, Toho introduced the cast for Higuchi Shinji's two-part live-action film Attack On Titan via a set of character posters, but the biggest question remains from the fans - how will the giants look?  Well, our first glimpse of the towering Colossal Titan has now been revealed in a new teaser poster with a tagline stating "The world is cruel".

Keeping true to the saying that size does matter, the official site proclaims the giant titan will be even larger than Godzilla himself, standing 120m tall, compared to Garth Edwards' tallest Godzilla at 108m.  A combination of CG and practical SFX is being employed under the supervision of special effects director Onoue Katsuro to bring these destructive monstrosities to life.  Conceptual art was designed by Tajima Kouji who interestingly enough, painted a cool Attack on Titan fan poster.

The sudden arrival of the Titans--mysterious, gigantic humanoid creatures who devour human beings one after the other--brings mankind to the brink of extinction. Fast-forward more than 100 years later. What remains of the human population now live in relative peace behind massive walls that were erected to defend themselves against the Titans. Yet once again, that peace is shattered when a Titan measuring over 50 meters tall smashes through the wall, allowing a horde of other Titans to enter. The protagonist, Eren, had been resigned to a life confined behind these walls. Nothing I do would make a difference, he thought. But when he joins the "Outer Wall Restoration Team" set up to fight against the Titans, he is reunited with Mikasa, a childhood friend and someone he had long rued not being able to save. The new recruits embark on a mission to obtain explosives, which had become rare and precious, before getting past the waves of Titans to plug the gaping hole in the wall, with humanity's survival on the line. Will there be a future for Eren and Mikasa, and for mankind itself?

The first chapter will open in August, while the second will follow in September.  Click on the poster below to enlarge the image. 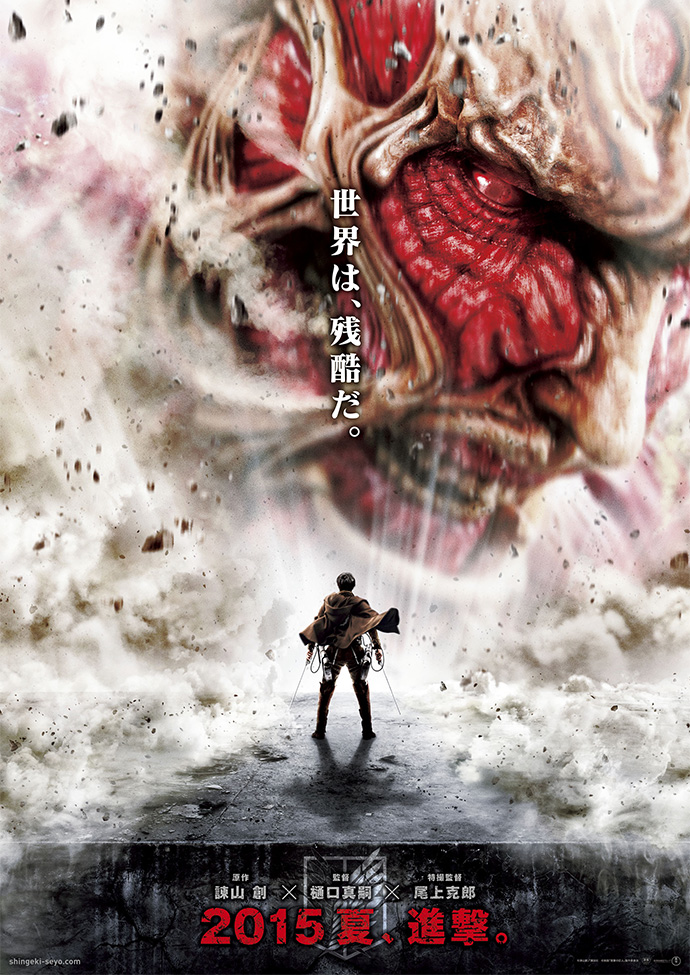 Do you feel this content is inappropriate or infringes upon your rights? Click here to report it, or see our DMCA policy.
actionAttack On TitanHiguchi ShinjiJapan