Review: WHY DON'T YOU PLAY IN HELL?, A Brash Bundle Of Boundless Fun 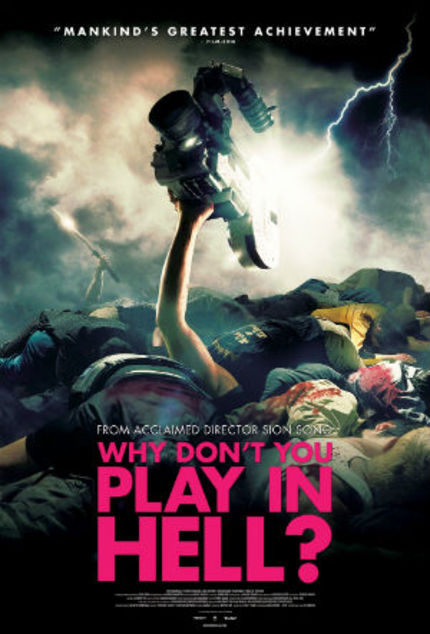 [This review originally ran following the film's premiere at the Toronto International Film Festival. And, yes, thanks to the general craziness of of R100 I did, in fact, eat my shirt.]

Mark my words: If another film brings even half the level of lunacy to the Toronto International Film Festival's Midnight Madness lineup as does Sono Sion's Why Don't You Play In Hell?, I will eat my shirt. Literally. I will cut up the shirt I am wearing right now - which I quite like, incidentally - I will cook it into a stew, and I will eat it.

I feel more than confident in the safety of said shirt while making this offer, however, because after a pair of 'serious' pictures, and others that while harrowing were relatively speaking rather conventional, Sono's Why Don't You Play In Hell? is absolutely mad. It is every insane urge and image that Sono has had banging around in his head unused over his career distilled down and splashed on screen in all its absurd - and frequently very bloody - glory. Fans, rejoice: This is the Sono film you've been waiting for since Love Exposure.

The multi-stranded story resists synopsis - and does so quite convincingly - but the major plot threads go like this: There is a pair of rival yakuza gangs engaged in a feud spanning decades, a feud driven in part by one of the gang leaders' obsession with the others' daughter. The daughter? Well, dad's trying to set her up as an actress to make good on a promise made to his wife, but she's not being particularly helpful. And then there's the gang of renegade film enthusiasts who call themselves the Fuck Bombers ...

Trying to make logical sense of Why Don't You Play In Hell? is like trying to untie a Gordian Knot. It's simply not going to happen. There's just too much crazy. But it at least mostly makes sense while it's playing out and the entire cast - including familiar faces such as Sakaguchi Tak, Kunimura Jun and Tsutsumi Shinichi - are having so much fun throughout that the bits that don't quite click in are easy to forgive.

A genre masher that incorporates yakuza film, martial arts, liberal doses of blood, slapstick comedy and some earnest opining on the power and value of cinema delivered in a very goofy package, Sono packs enough ideas in here to fill a handful of films and yet somehow keeps it all working together in a surprisingly unified whole. It's brash, funny, sexy, unrepentently stylish, endlessly surprising and - most important of all - simply great fun.

Review originally published during the Toronto International Film Festival in September 2013. The film opens at the IFC Center in New York on Friday, November 7, and will then open in select theaters throughout the U.S. on Friday, November 14. Visit Drafthouse Films for more information.

Do you feel this content is inappropriate or infringes upon your rights? Click here to report it, or see our DMCA policy.
JapanKunimura JunSakaguchi TakSono SionTsutsumi Shinichi

More about Why Don't You Go Play In Hell?