Destroy All Monsters: Masculinity Is Mythology 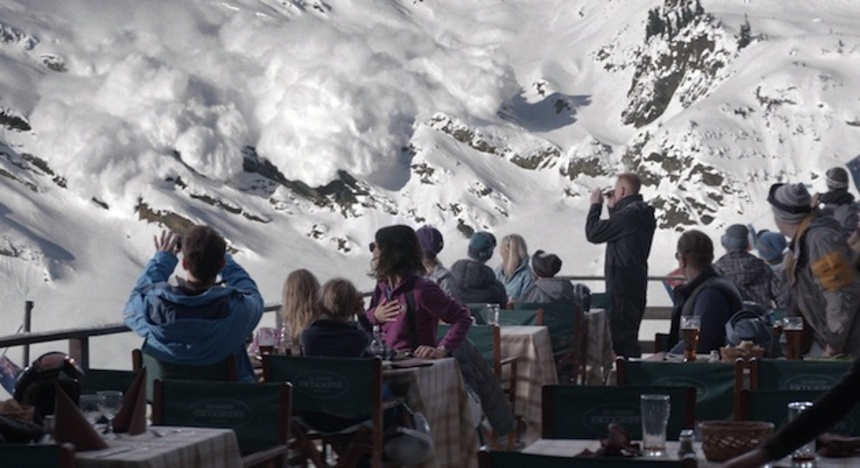 There's a great unraveling in Force Majeure, the Swedish film tagged to move ahead to the foreign language Oscar nomination. It is the unraveling of a male ego. The film arrives at an unintentionally sharp moment: this has been a year of male egos (not unlike, I suppose, all the years before, though 2014 took it up a notch), and what happens when they begin to become unstrung.

But after a summer (and fall) of a distressing number of examples of what Andrew O'Hehir calls the "pathological cluelessness" that leads #NotAllMen to suborn others for the gratification of their own egos, Force Majeure takes a silkier and in many ways more unsettling tack: it proposes that "masculinity" is little more than a bent narrative that men (and women) tell themselves; and yet wonders whether without that narrative, nuclear society might have no idea how to function.

The film is about a man named Tomas, and what happens to his sense of self after a minor crisis on a ski holiday. It is, unequivocally, a comedy (at least as much as Gone Girl was a comedy). In the film, Tomas, a wealthy and successful father and husband, bolts when a minor avalanche briefly threatens the ski chalet where he, his wife, and two small children are staying. He pulls a George Costanza.

Though no one is hurt or even greatly inconvenienced in the event, the thought experiment that Tomas' response kicks off begins to work on the hearts and minds of all around him, like a computer virus. Force Majeure is a neat piece of fiction about this family in minor, existential angst, and we watch the question of why daddy ran away cascade outwards (to his wife) and downwards (to his children).

But what particularly impressed me about the film was watching the question of manhood rebound from Tomas to his brother, Mats, who is also staying at the chalet. As both men begin to unravel, the film starts to suggest that the male ego is a fantasy story that men tell, reinforce to each other, and have not a single clue what to do with if it starts to fall apart.

So: is manhood just a snake eating its own tail, a self-perpetuating cycle that we've all bought into, and even need on some basic, structural level? To behave "like a man" Tomas must feel "like a man," yet to feel "like a man" he must believe that he behaves "like a man." And what the hell does "like a man" mean, anyway? For the hour and forty minutes following the avalanche sequence in Force Majeure, the film worries the concept of Tomas' manhood back and forth like a loose piece of metal until - inevitably - it snaps.

The detour with Mats (played, and played brilliantly, by Kristofer Hivju, who appears as Tormund Giantsbane on Game of Thrones) sealed the deal for me on the film. Mats, with his gigantic red beard and twenty-year-old girlfriend (he is older, and divorced from the mother of his children, and therefore an emblem of the "midlife crisis" genre of male fiction), is even more a caricature of chest-puffing manhood than his brother is.

At first, Mats seems all the more confident for it - but when his girlfriend Fanni mentions in passing that she thinks Mats is less likely to save his family in jeopardy than another, weaker man they know, Mats' big brain wanders around in the deflation of his own ego for so long that the movie nearly seems to have upped stakes and switched principal characters altogether.

Mats' personal crisis turns out to merely be an extended grace note to make the point, however, that once you begin tugging at the threads of the mythology of masculinity, the whole bloody thing reveals its wafer-thin construction. Manhood is an idea.

In spite of the film's laugh-out-loud moments, there's a grave seriousness to its proposition that the only recovery from the shattering of Tomas' ego is to conjure a scenario that will allow him to reassert his mythic stance as the hero of the domestic unit - the top of the (proverbial) mountain, with wife and children safely enshrouded in his keeping and therefore, by necessity, subordinate.

Towards the end of the film, Tomas and his family have a brief incident during a whiteout while skiing alone on the mountain, which lets Tomas reassert that selfsame patriarchal power. It seems to me that the parents may have ginned up the event (where the mother is temporarily lost, requiring Tomas to find her and literally carry her to safety) to reassert the functioning family paradigm in the eyes of their children.

It's also possible that the wife, Ebba, contrives it herself, because she knows what her sad-sack husband needs in order to begin functioning again. (Her husband's best tactic prior to this: bursting into anguished wailing so cacophonic that it wakes the children.) It's also possible that the misadventure is entirely real, and that it is therefore a contrivance of the script. I like the first possibility best, and the ambiguity nearly as much.

But in any case, the sequence ends with an honest-to-god power shot of the family striding confidently out of the lodge. They look like the Avengers. Our useless male protagonist has been returned to that most holy pantheon of masculine heroism: the superhero movie.

But the film's last scene is altogether more fascinating: an unrelated adventure on the way home, as the bus carrying all of our characters careens down the mountain road and Ebba, on a particularly stomach-churning turn, freaks out. She panics, and her panic ignites the panic of all the other people on the bus, and soon the entire crowd has fled and is walking down the mountain on foot rather than risk the risky drive.

As this unfolds, both Tomas and Mats get to behave "like a man." They bark orders, and guide the flock, and Tomas even smokes a cigarette; Mats gets the passengers off the bus, "women and children first." Order - i.e. patriarchy - has been restored. The film drifts away into dreamy, unsettling silence. Everything is "right" again, because the mythology of masculinity is right back where it belongs. Everyone seems happier having forgotten that the story is just a story, and that ten minutes ago, they no longer believed it.