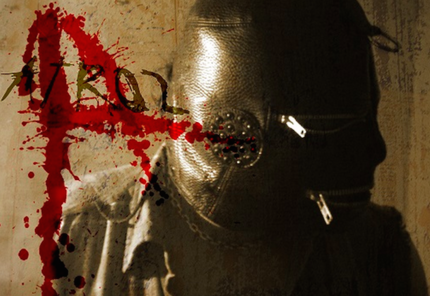 Young Mexican horror filmmaker Lex Ortega has made a name for himself within the festival circuit, with several gory short films such as T is for Tamales and Mother's Blessing. He's also a recognized sound designer, and has worked for several international productions, like Frankenstein's Army and Late Phases.

When I asked Cineteca Nacional's José Luis Ortega about Lex and the current genre cinema scene in Mexico (back in December 2013), he said, "I think he's, if not the only one, at least the top of the iceberg of a bunch of people who are recording their gore, brutal, gothic or very atmospheric movies. Lex is the only one who dares to sell his products and show them at festivals. He has a really good craft and he's much better than many film students from the Centro de Capacitación Cinematográfica."

Recently, Ortega has been busy doing a segment for both México Bárbaro and Alerta! Recuento de Cadáveres, and now he is more than ready to jump to the feature length format. Atrocious (Atroz) is Ortega's debut feature and it "portrays the story of two serial killers, who after being arrested for causing a traffic accident, police confiscate some videotapes. These tapes contain brutal murders that show human wickedness, their background, paraphilias and psyche of these murderers."

To complete the filming of Atrocious, Ortega and producer Abigal Bonilla have launched a crowdfunding campaign at the Mexican site Fondeadora. They have already 35 minutes of footage but they need around $8,000 dollars to finish the film. As usual, all the contributors will get a perk in exchange of their support.

You can check the campaign video below (click the CC button for the English subtitles) and support the project here.

Do you feel this content is inappropriate or infringes upon your rights? Click here to report it, or see our DMCA policy.
AtrociousAtrozCrowdfund ThisHorrorLex OrtegaMexican Cinema