Ard Vijn
Editor, Europe; Rotterdam, The Netherlands (@ardvark23)
Tweet Post Submit
This year, the legendary animation director Miyazaki Hayao got an honorary Academy Award for his stellar work in film. For the past thirty years he has been responsible for a string of films which range from very great to awesome, and the studio he co-founded may have the strongest track record in the history of cinema. His insistence that he is really, truly retired from feature film directing is earned but still a shame to hear.

It is therefore strange to think of him as a struggling artist, who ever had great problems to get even a single project greenlit or financed. However, this was exactly what he was at the end of the seventies. Lauded by colleagues, the public hadn't yet embraced Miyazaki, and the lack of financial success made investors shy away. Indeed, it wasn't until Princess Mononoke was released in 1997 that Miyazaki and his Studio Ghibli would get a reputation as a financial powerhouse to be reckoned with, and a safe bet.

But from 1979 to 1982, Miyazaki Hayao had tried to get a Princess Mononoke film off the ground, and got rejected again and again. The script and sketches he used at the time were vastly different from the film he'd make later. This first Princess Mononoke story was a fairy tale about a young girl who was forced into marrying a forest spirit, who looked like a cross between Totoro and the Catbus. As the two befriended each other, they went on a quest to save the girl's father, who had become possessed by an evil entity.

Fans of the film will recognize that this story has totally nothing in common with it. Hayao Miyazaki even allowed Japanese publishers to make a book of this script even while the film was in pre-production, so un-related are the two.

This book has now been translated to English, and has been re-released in the US by VIZ Media as a large coffee-table book. Not to be confused with one of the film's artbooks, Princess Mononoke: The first Story tells its story like an illustrated fairy-tale. While the final film version is briefly mentioned in some additions at the very end, for the vast majority of its 104 pages the story is treated as exactly that: a small stand-alone story, with drawings by its writer.

And because Miyazaki can draw mean and lean like the genius he is, this makes it a gorgeous book indeed. Fans of his very detailed paintings and inks may feel a bit disappointed by these loose impressionist pastel-tinted sketches, but I felt elated at this mostly unknown bit of pre-Ghibli Miyazaki work. It's also fun to see how many little things were taken by Miyazaki from this abandoned project, and incorporated years later in many of his Studio Ghibli films.

What you mostly get with this book is a great look at a Princess Mononoke which might have been... and which was eventually replaced by a totally different Princess Mononoke, which happened to be one of the best anime ever made.

The picture below is actually a gallery, so click on its edges to get a few more looks at this book. 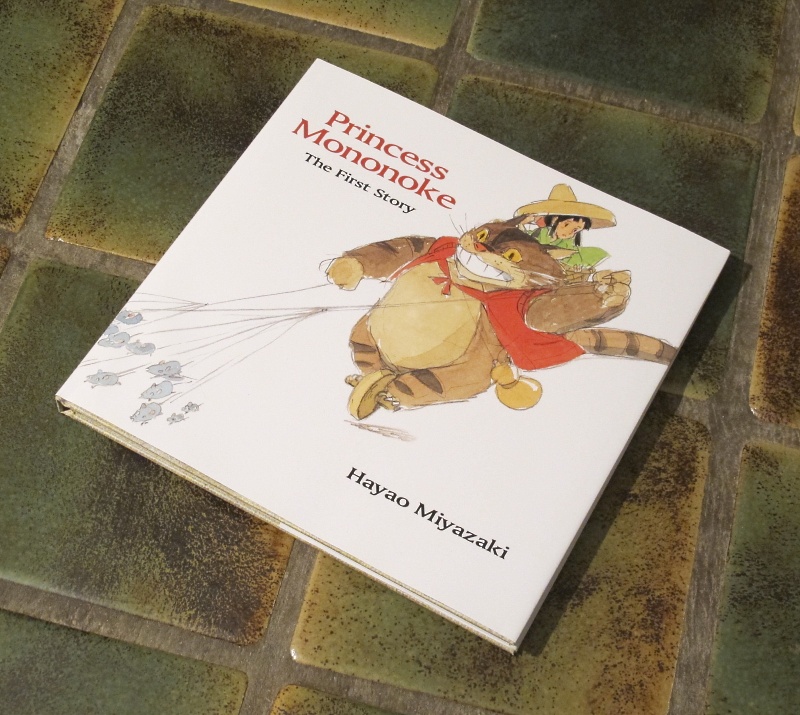 And here it is: a hardcover coffee-table book with an attractive dust-cover. 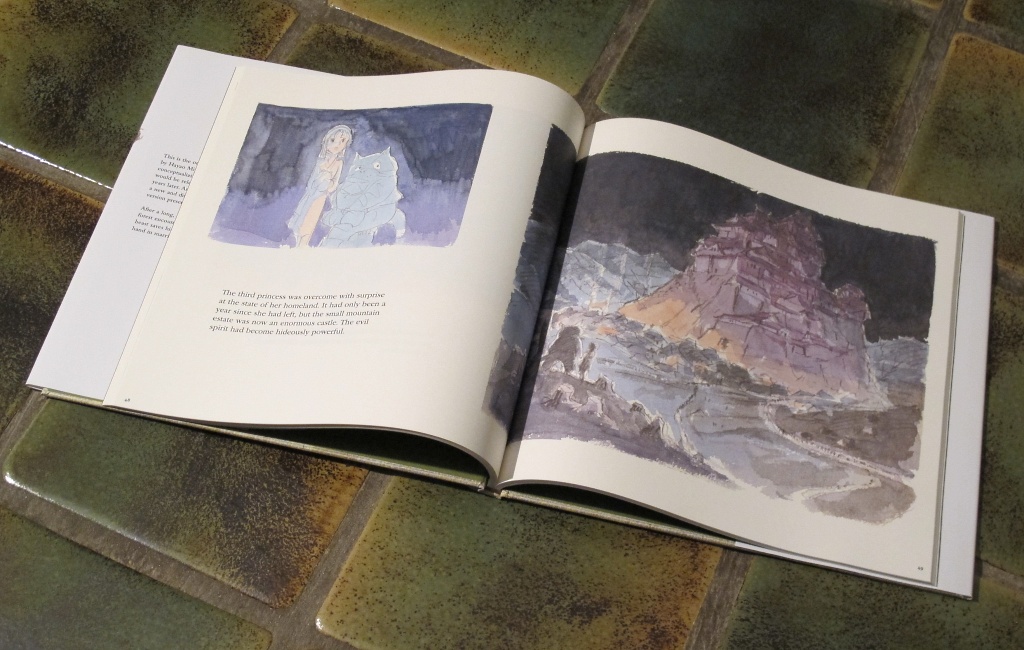 The story itself is told as a children's story, a fairy tale. Large letters, big pictures. Some of the sketches have even been enlarged from their originals, but even when he's just scribbling, Miyazaki's artwork can easily withstand such close scrutiny. 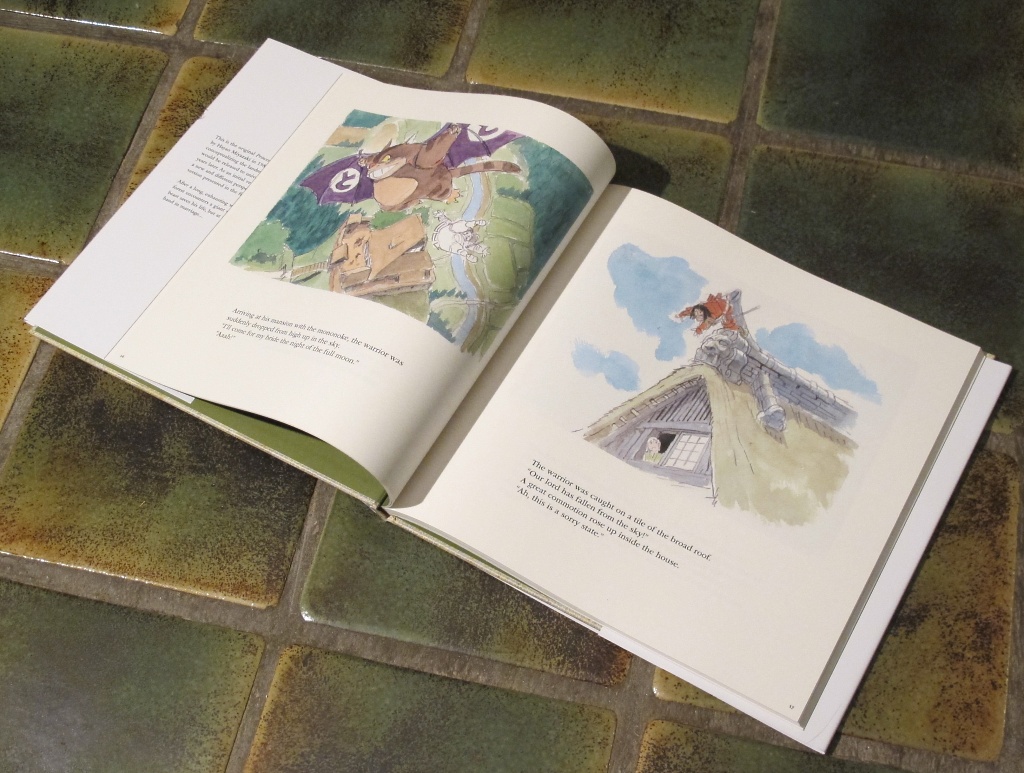 And of course it wouldn't be quite Miyazaki if he hadn't put in at least one flying sequence... 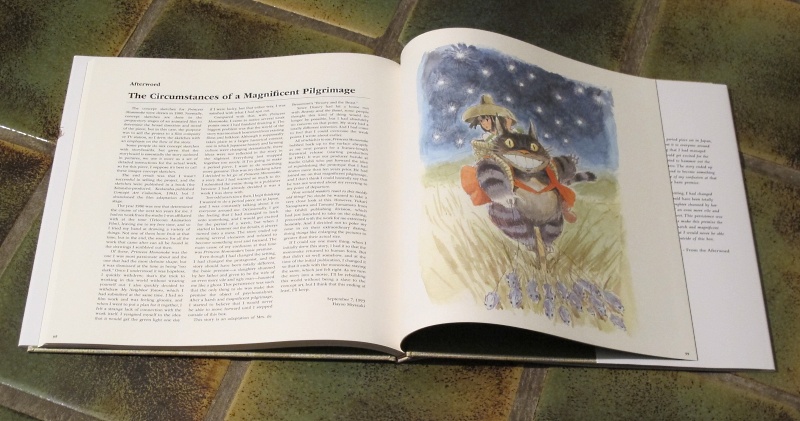 At the back end of the book are some short sections on the script, including a 1993 letter from Miyazaki Hayao. In that letter, he hints at the upcoming Princess Mononoke film, and that it will be somewhat different from this script.

He doesn't even begin to reveal how different, though!