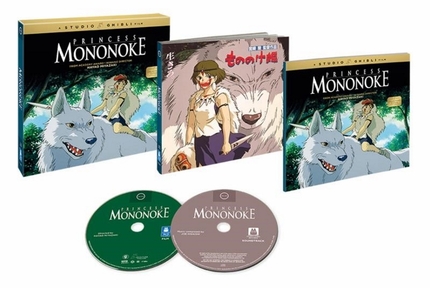 To celebrate the 20th Anniversary of the US release of Princess Mononoke, Studio Ghibli and director Miyazaki Hayao's first major breakthrough film in the Unitedd States, distributor Shout! Factory and GKIDS are partnering to release a very special limited collector's edition of the film on Blu-ray.

Princess Mononoke wasn't Ghibli's first film to release in the US, but it was the first time a Ghibli made a major critical impact in the States. This new release will include special packaging, a book with essays on the film, including one by RogerEbert.com writer, Glenn Kenny, and a CD with the film's Hisaishi Jo soundtrack for the first time in the United States. Check out the details below and start making room in your budget for this set, now available for pre-order at the link below.

Los Angeles, CA – Studio Ghibli and GKIDS, with distribution by Shout! Factory, will issue Princess Mononoke in a beautiful collector’s edition release on May 14, 2019. The limited-edition set comes housed in an elegant hard slipcase and includes a new 40-page book with stunning art and essays. Featured in a deluxe disc portfolio will be a Blu-ray™ of the film paired with hours of special features, and the film’s soundtrack made available on CD for the first time in North America. The set is available for pre-order now on ghiblicollection.com.

From the legendary Studio Ghibli, this epic fantasy film is one of the best-selling and internationally renowned films of all time. Princess Mononoke is here presented with a release perfect for collectors and animation fans who have adored the film since its initial release.

The first animated film to win the Japan Academy Prize for Picture of the Year, Princess Mononoke is Miyazaki’s epic masterpiece that has dazzled audiences worldwide with its breathtaking imagination, exhilarating battles, and deep humanity.

Inflicted with a deadly curse, the young warrior Ashitaka heads west in search of a cure. There, he stumbles into a bitter conflict between Lady Eboshi and the proud people of Iron Town, and the enigmatic Princess Mononoke, a young girl raised by wolves, who will stop at nothing to prevent the humans from destroying her home, and the forest spirits and animal gods who live there. Featuring the voices of Gillian Anderson, Billy Crudup, Claire Danes, Minnie Driver, Jada Pinkett Smith, and Billy Bob Thornton.

Do you feel this content is inappropriate or infringes upon your rights? Click here to report it, or see our DMCA policy.
Hayao MiyazakiNeil GaimanBilly CrudupBilly Bob ThorntonMinnie DriverJohn DiMaggioAnimationAdventureFantasy