Christopher Bourne
Featured Critic; New York City, New York
Tweet Post Submit
Gone Girl, David Fincher's latest, and New York Film Festival opener, based on the bestselling novel by Gillian Flynn, begins with a close-up of its central married couple, Nick Dunne (Ben Affleck) and Amy Dunne (Rosamund Pike). Nick is gently stroking Amy's hair, while in a voiceover, he speaks of "cracking her skull open" so he can know what she is thinking and be privy to all her secrets.

This rather violent description of Nick's is one that neatly encapsulates the caustic view of marriage, and especially themes concerning the facets of themselves that intimate partners keep hidden from their significant others which resonate throughout Gone Girl.

After we hear Nick say this, Amy, who up till then has had her head turned, suddenly looks up at Nick. Nick, it should be mentioned, is off camera, so the image is essentially a close-up of Amy, with a slight smile and an appropriately enigmatic expression. This image recurs near the conclusion of the film, but becomes invested with a very different - and much darker - meaning and context, as a result of all that has occurred in between these repeated images.
Exactly what happens over the course of Gone Girl, an immaculately and evocatively crafted, yet unabashedly trashy and pulpy work, is something I'll have to tread very carefully in describing.

Its two-and-a-half hour running time is so riddled with major twists and reversals in its narrative - including a major twist halfway through that upends just about everything - that detailed plot description carries the risk of falling into spoiler-y pitfalls. This will be a moot point, however, for those coming to this film after having read the novel; Flynn adapted her own book for the film's screenplay, and by all accounts, this is quite a faithful adaptation. (Not having read the book myself, this is something I'll have to take on hearsay.) But for the sake of those not familiar with the plot, I'll just sketch out the basic outlines here.
Gone Girl begins on the day of Nick and Amy's fifth wedding anniversary, a day on which Nick arrives home to find his front door open, furniture scattered in the living room, a smashed glass table, and Amy gone without a trace. Nick promptly calls the police, and soon two detectives arrive on the scene: Rhonda Boney (Kim Dickens) and her partner Gilpin (Patrick Fugit). A sort of good cop-bad cop dynamic arises here, with Gilpin taking an instant dislike to Nick and immediately being suspicious of him, while Rhonda is more willing to give Nick the benefit of the doubt, at least initially.
The present scenes dealing with Amy's disappearance alternate with flashbacks based on entries from Amy's diary, detailing how they met and how their relationship progressed up until she disappeared. We see them meeting in New York, in scenes that swoon with romanticism and playful banter between the lovers, and how they were impacted by the recession which put a financial strain upon them, and eventually led to both of them moving to Nick's childhood hometown in Missouri. Both Amy's diary entries and the present day investigation reveal fissures in their marriage and conflicts between the two, involving infidelity and intimations of violent confrontations. 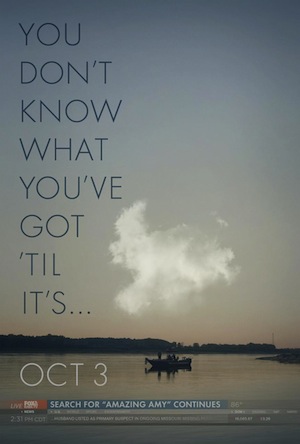 It isn't long before Nick becomes the prime suspect in Amy's disappearance and possible murder. Soon the media becomes involved; Amy is known to the public as the real-life model for "Amazing Amy," a beloved children's-book character in a series written by Amy's psychologist parents. Every gesture and demeanor Nick makes is scrutinized and criticized for not seeming genuinely concerned about his wife. Nick is excoriated on TV nightly by Ellen Abbott (Missi Pyle), a Nancy Grace-type who does everything she can to turn the court of public opinion against him. Nick is finally compelled to enlist the services of Tanner Bolt (Tyler Perry), a Johnnie Cochran-esque defense attorney who eagerly accepts the case and coaches him on the right way to appear to the public.
And that's pretty much all I can say about the plot of Gone Girl without getting into spoilers.
It is about a missing woman only on its surface; its real subject concerns the masks and performance art that we often employ in both intimate relationships and for the public, often making it impossible to determine who the "real" person is underneath. The aspect of this concerning romantic partners proves to be far more interesting than the media critique served up here. The depiction of the tabloid exploitation of sensational crimes has a shooting-fish-in-a-barrel quality that lacks real resonance or anything new to say about this.
David Fincher lends a meticulous, atmospheric cinematic craft to these proceedings, which won't be a surprise to those familiar with his previous work. Gone Girl fits solidly within a long tradition of American film noir, and the moody visuals provided by cinematographer (and frequent Fincher collaborator) Jeff Cronenweth are perfectly appropriate. Trent Reznor and Atticus Ross, scoring their third straight Fincher film, contribute a subtle yet effectively unsettling score, especially evocative in one spectacularly bloody scene.
Another great aspect of Gone Girl is how frequently funny it is. Even Fincher's grimmest films have streaks of dark humor embedded within them; here he fully embraces this less remarked on facet of his cinematic sensibility, making Gone Girl the closest he's come to making an out-and-out comedy.
The performances are uniformly terrific; Affleck's extra-filmic baggage as a sometime real-life tabloid subject proves an asset, and he nicely renders the complexity of a character who at one point admits that he's "not a good guy." Other actors step up to the plate in smaller, but no less memorable roles. Particular stand-outs include Neil Patrick Harris, wonderfully creepy as Amy's obsessive ex-boyfriend, who becomes a potential suspect; Carrie Coon, funny and empathetic as Nick's twin sister and his closest confidante; and Tyler Perry, who will surprise many by how skillful he is here as the media-savvy lawyer, who gets some of the film's best lines.
The real revelation here, however, is Rosamund Pike, whose performance brilliantly gets under the skin of Amy's gradual transformation as more and deeper aspects of this mysterious woman are revealed. Again, potential spoilers prevent me from giving specific details, but suffice to say that the woman we see at the beginning is revealed to be far less of a victim than she initially appears.
Gone Girl opens in the U.S. on October 3.

Do you feel this content is inappropriate or infringes upon your rights? Click here to report it, or see our DMCA policy.
Ben AffleckDavid FincherGone GirlNeil Patrick HarrisNYFFNYFF 2014Rosamund PikeTyler PerryGillian FlynnCrimeDramaMystery