Destroy All Monsters: "I'm That Cunt," Said The GONE GIRL 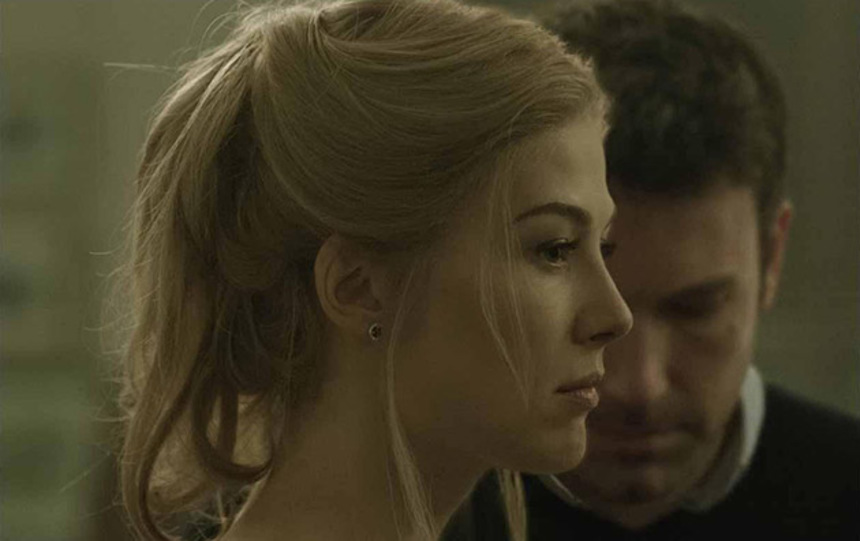 Spoilers for Gone Girl, from one of six audience members who hadn't read the book beforehand.

"You fucking cunt!" Ben Affleck's Nick Dunne spits at his wife, Amy Elliot-Dunne (Rosamund Pike) as he grabs her by the shoulders and bounces her head off the wall in Gone Girl's penultimate scene. Directed by David Fincher and written by Gillian Flynn (adapting her own novel), the scene is the payoff of two and a half hours of mounting pressure that Gone Girl has been precision-crafted to deliver to this point. Now we watch the pressure snap like an overwound spring.

In his choice of that particular word, the last refuge of the irrevocably weak male, Nick is laying a cherry on top of the overwrought sundae of Men's Rights Activism paranoia that Gone Girl has faithfully assembled before our eyes over the course of the film, in the person of Amy.

And what a treat she is: Amy not only concocts an elaborate ruse to fake her own death and frame her philandering husband for murder, likely leading to his death by lethal injection, but also - twice! - re-frames consensual sexual activity with an after-the-fact rape accusation to eliminate a male opponent from her game board. In the latter case, she also performs a precise, first-degree murder.

Amy could well be the most agented female character in any major American film in 2014, and she is also a hysterical (pun intended) elaboration on the hoariest clichés of why men presume themselves to be fearful of women. Metaphorical castrations aside, if Amy had only severed Nick's penis and fricasseed it for dinner, the film's accomplishment with the character would be complete.

In response, Nick calls her a cunt, because that's exactly what any male in the audience with even a dust mote of sympathy for Nick, at this point in the film, could very well be thinking, too. It's what all the think pieces in the last two weeks have been circling around without saying it; it's the Problem of Amy, but only Nick seems to have sunk low enough to actually put a word to it. That word. Amy has earned the word; defined it. She has become worthy of that pinnacle of aggressive sexual language, with its layered-in, inherent misogyny. She's that cunt.

And Amy, bless her, agrees.

She explains to the bewildered Nick, who has not even caught his breath yet from smacking her into the drywall (earlier, we watched him bounce her off a banister post), that she is, absolutely, a cunt.

She is, moreover, the cunt he married; and more importantly than that, the cunt he wanted. "The only time you ever liked yourself was when you were trying to be someone this cunt might like," she pronounces.

It is brutal, and messy, and far outside the boundary of whatever the audience for Gone Girl presumed to be the value prop of a movie about a man looking for his disappeared wife. It's a rich, gruesome point, and it cascades backwards through the movie's tightly-wound structure to reorient the entire argument.

Amy is not just the cunt Nick wanted; she's the cunt he constructed; she's the interlocking puzzle piece that fits the sawtooth edges of invented personality that any amoral, shiftless, and generally useless modern American male will concoct in order to fill the beats of the programmed script from meet-cute to baby-daddy, with a dusting of sugar in between. That Nick's script also includes pages that allow him the pleasures of bouncing a big-titted co-ed on his knee and detours into physical violence is beside the point; it's his script. Nick controls the narrative, and thus controls the argument. Amy merely mates herself to what he projects.

Amy pushes the impossible labyrinth of masculine control to its furthest extreme and then calmly breaks it; the "I'm that cunt" speech is the payoff of the earlier "Cool Girl" speech, in which she extolls all the things women are meant to present to men to satisfy their concept of what a woman is. (Even the appellation "girl," itself, is a condescending diminution of a thirtysomething married adult. And it's in the title of the film.)

Indeed, there's is a cunning metatextual relationship between everything Nick does to Amy to turn her from Cool Girl into that cunt, and everything Gone Girl, the film, must do to Amy, the character, in order to allow all this to happen.

Consider the use of narrative point of view in the film. I have not read the book, but by dint of the need to preserve "the twist," the film must be completely linear in its preservation of information, siding with Nick at the outset. It leans on a lengthy and slow-moving first act in which Amy is offscreen (save for lugubrious, overheated journal narration). Nick is principal, and while his behaviour can scarcely be called heroic ("hapless" would be a better description, a goofy moron too stupid to know not to smile during a press conference about his disappeared wife), filtering the first act through Nick's point of view positions him as the audience-identification character, the default "good guy," nevertheless.

In its totality, Gone Girl does not, in any way, suggest that Nick is a good guy. Like many male heroes in David Fincher films, Nick is at best a man whose base survival instinct awakens when plunged into life-or-death antagonism which requires him to evolve his skill set to match that of his opponent. This can be pleasurable to watch, but doesn't make Nick a hero. Like Fincher's other "Nick" - Nicholas Van Orton in The Game - Nick Dunne is in a submerged car long before he has any notion of how to get out of it; unlike Van Orton, it's a pleasure to watch Dunne sink.

Fincher does not particularly like masculinity and takes frequent pains to undercut it, whether in bold strokes (the laugh-out-loud satire of the entirety of Fight Club) or grace notes (Mikael Blomkvist whining like a baby as Lisbeth Salander patches up the cut on his head in The Girl With the Dragon Tattoo). In Nick, Fincher has found perhaps his most hopelessly worthless male "hero" yet: a sniveling, sad-sack wanna-player, who checked out years ago, and whose "harmless" vices (he drinks literally constantly in the film, sometimes while fucking his students) paper over a propensity to batter women and some basic, deeply sexist, beliefs.

People are questioning the film's "misogynist" portrayal of Amy, as though she's - what? A bad role model for teenage girls? But this misses the point. I think the real fruit of Gone Girl is how completely it condemns Nick - useless, shiftless Nick - by turning the performative behaviour that Amy enacts in reaction to her husband into Grand Guignol farce, outlining all of Nick's broken values in blood-soaked bas relief just by having Amy live up to them.

Because Amy kept going: she followed the logical line of the Cool Girl to its end point, and discovered the no-win scenario that misogynist culture happily builds for women. There's an inextricable flip side to the Cool Girl branding, and it's waiting behind the lips of all the men to whom a woman dares present her unchecked agency. To paraphrase Harvey Dent, you either die a Cool Girl or live long enough to see yourself become a cunt.

Amy figures this out, and does something with it. The resulting motion picture is a knockout punch.

The grace note on all this: Nick won't stay in the marriage because she trapped him, or because of her elaborate ruse; he'll stay because yes, at the end of it all, she's exactly correct. She's the cunt he wanted, even if he'd never have been articulate enough to explain it to himself or anyone else. He knows her for the first time; and just as completely, knows for the first time that he's found his exact mate. And if she's that cunt - when are we going to invent a word for what that makes him?