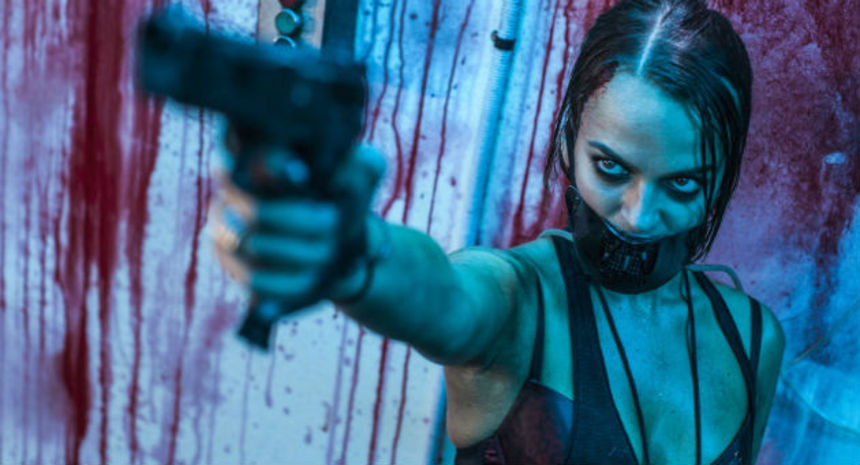 Wildly apocalyptic with dollops of silliness, Wyrmwood proves to be a splendidly gritty affair, a tale that feels like it's being told from the back of a jeep as it races away from doomsday on a very bumpy road in Australia.

To start things off ... well, let's skip past that and get right into the two main story threads. The primary engine follows Barry (Jay Gallagher) and his family as a deadly outbreak comes home. He's awakened by a frantic phone call from his sister Brooke (Bianca Bradey), who was enjoying an informal photo session with two friends at home when one of them appears to get violently, unexplainably ill. Brooke wakes up Barry with a dire warning, and then the phone line goes dead.

And as that happens, Barry's 11-year-old daughter walks into her parents' bedroom and announces that there's someone in their kitchen. From there, things become increasingly frenzied, as Barry and his wife make use of every tool at their disposal -- Barry is a mechanic, and his garage is well-stocked with sharp objects -- to fight off the intruder and flee into the night. Things do not go well for the little family.

Meanwhile, the unfortunate Brooke has ended up in the clutches of a mad scientist who is performing experiments on a variety of people chained up in a small room. Every other captured soul is exhibiting the classic symptoms of zombie-dom, which doesn't make Brooke feel very good about her chances of survival, especially when the good doctor approaches with a very large syringe.

With that in mind, Wyrmwood wins points for originality, introducing a couple of zombie concepts I've not seen before that tie in well with the story and characters, helping to give the narrative a fresh spin. Teaming Barry with Benny (Leon Burchill), a fellow survivor, is also a smart move, since the differing personalities of their characters lends chemistry and good cheer to what might otherwise be a very downcast affair.

Director Kiah Roache-Turner, working from a screenplay he co-wrote with his brother Tristan Roache-Turner, is conscious of delivering comic relief from the otherwise constant tone of ominous foreboding, a bit like occasional comic eulogies in the midst of a sober funeral. It's somewhat too jarring at times, inducing a dose of disorientation, but when it scores it lends a welcome, raucous edge to the proceedings. What's consistent throughout is the limited photographic palette, which serves as a constant reminder of the doomsday scenario, and also as camouflauge for zombies in the wild to pop up unexpectedly.

Bouyant energy abounds in Wyrmwood, which fits well with the theme of a hardy few who are willing to do whatever it takes to survive, even when everyone else is dead and very, very hungry for human flesh.

Do you feel this content is inappropriate or infringes upon your rights? Click here to report it, or see our DMCA policy.
Bianca BradeyJay GallagherKiah Roache-TurnerLeon Burchill