Fantastic Fest 2014 Review: WASTE LAND, For This Detective, To Brood Is To Live 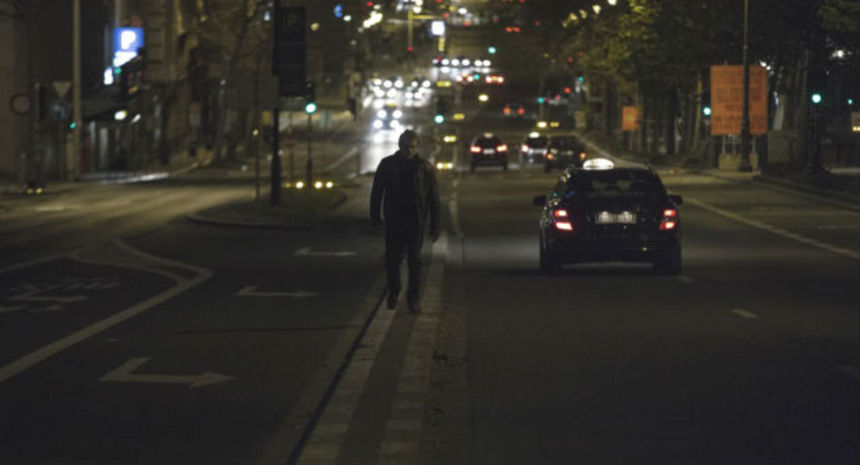 Diffusion is the name of the game in Waste Land, a brooding police procedural from Belgium that depends more on its pervasive ambience than plot twists.

Actually, it's probably a disserve to describe the newest film by writer/director Pieter Van Hees (Left Bank) as a procedural, because that implies a set order of events -- a murder, an investigation, a neat resolution -- and, too often, little more. Certainly, Waste Land includes those expected elements, but it's far less interested in the game than the players, primarily homicide detective Leo Woeste (Jeremy Renier).

Judging by outward appearances, Leo has it all: a respected position in the police force, as well as a supportive marriage mate in Katrien (Natali Broods) and a bright and healthy young stepson. Tiny cracks become apparent in his relationship with Katrien, however, when she reveals that she's pregnant. Having been abandoned by a previous lover when she became pregnant with her son, and well aware of Leo's proclivity toward his job, Katrien is inclined toward terminating her pregnancy. She's in her late 30's and pragmatic; if this is to be final pregnancy, she wants a partner she can depend upon to raise the child.

Leo insists that's what he wants, and then rushes out on a case he insists will be his last. A young man from the Congo has been found dead in a river, and the murder reeks of complexity. It's the perfect case for Leo to close out his career as a homicide detective, and he is at first determined, and then obsessed with solving it.

The case resists an easy resolution, which Leo appears to welcome. Despite his repeated assurances to Katrien, it becomes apparent that he's not ready for big changes, either to leave the force or to fulfill his upcoming, expanded parental duties. As he continues to crack under the strain, he reaches out to Aysha (Babetida Sadjo), the victim's distraught sister, for sexual comfort, which is surely one of the most boneheaded decisions he could make. There is also a suggestion that the supernatural may be involved, which it not explored in any great detail.

Certain elements of the film rub me the wrong way the more I think about them, especially the relationship between Leo and Aysha. She's portrayed in a stereotypical manner, as a sassy, promiscuous black woman who is quick to tempt the rigid white European until he gives into the overwhelming temptation. It's such a hackneyed, offensive characterization that I felt sure it would lead into a revelation that something else was involved, something that would explain her actions as under the control of a power greater than she could resist, but that never happens.

Renier is a strong actor and he gives a powerful performance, exuding the complexities of emotional pain and exposing the growing fissures in his character's personality. Although the details of the murder mystery prove to be less than compelling, Renier leaves quite a haunting impression. Together with the agonizing, fragile atmosphere that Van Hees and his collaborators behind the camera create, that makes Waste Land a bruising, evocative experience.

Do you feel this content is inappropriate or infringes upon your rights? Click here to report it, or see our DMCA policy.
BelgiumFantastic Fest 2014jeremie renierPieter Van Hees