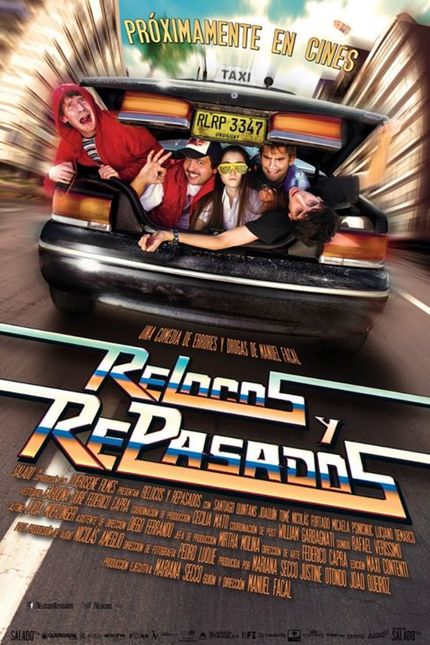 Manuel Facal's High Five (Relocos y Repasados) is an Uruguayan stoner comedy that belongs in the company of the greats.
While drug movies have been around for at least 50 years, it wasn't until the legendary Lou Adler's adaptation of the work of Cheech Marin and Tommy Chong became the first true stoner blockbuster, Up In Smoke, that the subgenre became a viable box office force. Since then drugs have popped up again and again in popular comedies in supporting roles, but lately, with the growing popularity of proud potheads like Seth Rogen, Matthew McConaughey, and Woody Harrelson, the drug film has been revived.

Facal's story is that of 20-something slacker Elias, a manchild on the verge of adulthood, whose hesitance to complete his college studies is born out by his inability to even complete a sentence in most cases. One day, as he's waking up and contemplating actually opening his textbook to study for an exam, he receives a frantic phone call (after ten missed ones) from his even less motivated friend, Andres. It seems as though Andres has stumbled upon a stash of drugs hidden in a soap dish halfway up a tree in the middle of a public park. An unlikely story, but it just may be the least unlikely event in the entire film. It is then that the rather excitable Andres makes a proposition.

While Elias attempts to gain his composure, Andres spits out a brilliant/insane idea through a fog of obscenities. He calls it, The Experiment. Five different drugs, five different people. Everybody gets totally wasted on a particular drug, and then watch the shit hit the fan. Not terribly scientific, but at least it's a decent jumping off point for some insane shenanigans. Elias feigns resistance, but pretty quickly succumbs to The Experiment, and the pair are off to gather the rest of the participants and meet at the home of the spoiled drunkard, Cooper (Nicolas Furtado) to begin their project.

All is well for a moment, and then Elias receives a call from his girlfriend informing him that her grandmother has died. A real bummer, to be sure. This is merely the beginning of the hurdles that each of the High Five must face during their day. Catalina, the little sister of Elias' girlfriend, gets stuck in a K-Hole, and ends up in a druggie version of Weekend at Bernie's with Cooper as her guide. Andres' little brother, Martin, gets stoned out of his gourd and ends up back at his high school mixing with the actual stoners in a bathroom stall, who then drag him along on their own whirlwind day. Andres runs into the men whose drugs he inadvertently stole, with whom he has a long-standing and quite unpleasant history and ends up being chased around town in a rather disquieting state, and Elias, tripping balls on LSD, attempts to hold himself together while his girlfriend's day gets worse and worse.

The key to a successful comedy of this type is in the timing. As slow as being on drugs can feel, a movie with pacing that is anything other breakneck will crash and burn at the first sign of slowing. There are no real emotional bonds in the film, everyone, even the couples, feel like acquaintances rather than longtime friends. However, there is also very little time to lament the fact that these relationships are rather thin. There is only time to laugh, and laugh out loud I did, several times.

High Five doesn't break any new ground, but what it does it does with confidence and panache. The script is delivered at a mile a minute pace, the visual gags fly fast and furious, and you never go more than a few moments without a laugh. Not everything has to be new and exciting, sometimes a movie can just be funny as hell by rearranging, reimagining, and relocating proven ideas. High Five is just such a film, a hilarious comedy that proves stoner idiots get laughs in any language.
Tweet Post Submit

Do you feel this content is inappropriate or infringes upon your rights? Click here to report it, or see our DMCA policy.
Fantastic Fest 2014manuel facaluruguay