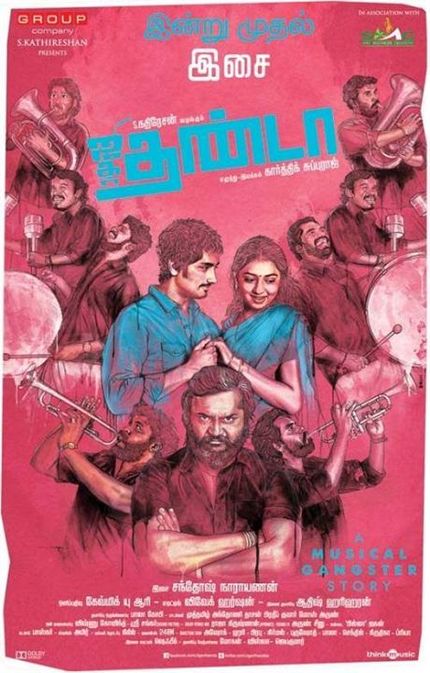 Karthik Subbaraj's Jigarthanda is long, juggles multiple storylines, tells complex stories in tiny chunks, is loaded for bear with insider references for Tamil film aficionados that will frequently leave newbs scratching their heads, and is nearly impossible to write about without spoiling something along the way.

Jigarthanda is also incredibly fresh, spell-binding, whiplash-inducing, genre convention bending, energetic, smart, and one of the very few recent examples of popular Indian cinema that I can throw my full support behind.

Jigarthanda may be this year's finest Tamil film so far.

Attempting to formally review this beast in any standard mode is a fool's errand. Subbaraj's jigsaw construction means that knowing more than a few lines of exposition before going in would equate to spoiling the film. Not in the contemporary sense of giving away specific plots points, but in a more pure way that involves taking away the magic that makes movies work beyond simple staging.
This is the kind of confidence that usually attends either untested rebels making their first film, full of piss and vinegar, or the older nothing-left-to-lose champions who can do no wrong. With his feature debut, Pizza, Subbaraj made that piss-and-vinegar film, destroying genre expectations and flipping the audience on its head in the final reel, however, with Jigarthanda he proves that not only does he still have some tricks up his sleeve, but he also expects your attention at every moment along the way.

The basic concept of Jigarthanda (a title that has a double meaning both as a popular drink in Madurai and through its literal translation as "cold heart"), is that a first time feature filmmaker named Karthik (played by Tamil film heartthrob Siddharth) is given a green light to make his first film, but not without conditions. The producer, who only raised the offer on a television program in an attempt to thwart a personal rival played by popular pan-Indian filmi villain Nassar, stipulates that he'll give Karthik the money to make the film, but only if it is a dark, violent gangster film like the ones that make the big bucks these days in Tamil Nadu.

Karthik is not too thrilled about his newly forged reins, but he is determined to make his own film given the circumstances, and as such he strikes out to find a real gangster  whose life will make the kind of film he can be proud of. When you're a new director in Tamil Nadu, and you need to make a gangster film, there's only one place to go: Madurai.

Madurai is not only the third largest city in Tamil Nadu, it is the home of a recent, very specific strain of Tamil film, the Madurai padam, or Madurai gangster film. Over the last seven years or so, there have been two major strains of Tamil films; there are the star vehicles (your Superstar Rajnis, Vijays, Suriyas, Ajiths, and such), and the Madurai padam. When you can't afford the star, you go to Madurai and let the actions and violence of this bubbling cauldron of corruption be the exploitable element required to get butts in seats.
Not surprisingly, many of the next-generation of Tamil film stars have come from the Madurai padam, including Karthi following his performance in Paruthiveeran, Dhanush became a bigger star following his amazing show in Aadukalam, and even Vijay Sethupathi (Pizza, Soodhu Kavvum), the thinking man's hero, made smaller appearances in these violent gangster films. No, not every gangster film is set in Madurai, but even when a film moves its physical setting elsewhere, its own jigarthanda often remains in Madurai.

Our director in search of what he feels is truth travels from cosmopolitan Chennai to Madurai in search of a local gangster legend named A. Sethu, the "A" is short for "Assault", and he's not a nice man. The film takes great pains to put us into the shoes of not only our obvious hero, Karthik, but also our presumed villain, Sethu (played by Bobby Simha in a scenery chewing performance for the ages that deepens as the film plays on). What follows is a game of cat-and-mouse between Karthik and a starry-eyed accomplice and Sethu's henchmen in an attempt to get the real story to put on film.
However, as one might expect, things don't go exactly to Karthik's plans, and the film begins piling complication on top of complication until the whole thing has only two choices, either the plot strands weave so tightly that they knot in a completely incomprehensible and irreversible snaggle, or, like the proper magician he is, Subbaraj is able to pull each string at the same time and show the bewildered viewer that they were never in any danger of tangling at all. In Jigarthanda, we are in the hands of a master.

The film's structure is so unorthodox, yet precise that even its two hour and fifty minute runtime seems to fly by. The episodic nature of the film manages to do a few remarkable things for the viewer. First, it allows the film to feel like it is each of the different kinds of film that Subbaraj is attempting to meld without smashing genres together unnecessarily. Second, it allows the viewer to be refreshed every half hour or so by throwing him into a new world within the world Subbaraj has already created.
Third, it makes the film nearly unreviewable for the critic because every half hour or so something happens that could be considered a spoiler. All of these effects seem quite carefully calculated by Subbaraj, and in his delicate touch with the telling of this story, he is the St. Patrick to my disgusting film critic rat and he can drag me through Madurai's underworld any old time he pleases.

There is a magic to popular Indian regional cinema that I cannot really explain, but it comes with complete submission to the form that not many people, and certainly not film festival programmers, are often willing to make. I lay prostrate at the temple of Indian regional cinema, and allow it to wash over me, coarse through me, and permeate my being in a way that finds me glued to cinema screens as often as possible, indulging in fantasties that no one would believe, for the sake of this magic that very few people seem interested in.
Jigarthanda is a worldy film that takes influences from within its own very small cinematic orb and transforms them into something that the discerning film fan can meditate on and enjoy. Will the general non-Tamil film fiend miss a few jokes? Yes, quite a lot actually. However, Jigarthanda manages to make universal that which is culturally specific; it's really quite an accomplishment.

Unfortunately, due mostly to its length, I can't see Jigarthanda making a run at the film festivals of the world. It's hard to convince programmers, a community that I now find myself to be a part of in some ways, to block off that much time for a single film. However, I really hope that this film manages to find some kind of audience beyond ethnic Tamils, because it deserves one.
The film is playing subtitled in some American, and presumably also some Canadian, theaters right now, and while it's not the thrill-a-minute hyperbolic explosion of joy that Eega was, I hope that some people will take a chance before it's too late.

For more cultural context on why Jigarthanda is such a "damn cool" movie, I highly recommend reading Sudhish Kamath's spoiler-free exploration of the genesis and cultural place that Jigarthanda has chiseled for itself.

***Edit to add that you might want to call your local theater to confirm subtitles. I had them in Dallas, but I'm getting reports that theaters in other cities aren't using them.

Do you feel this content is inappropriate or infringes upon your rights? Click here to report it, or see our DMCA policy.
IndiaKarthik SubbarajTamilSiddharthBobby SimhaLakshmi MenonNassarActionCrimeDrama