Review: LIFE ITSELF, Thumbs Up For Roger Ebert Doc 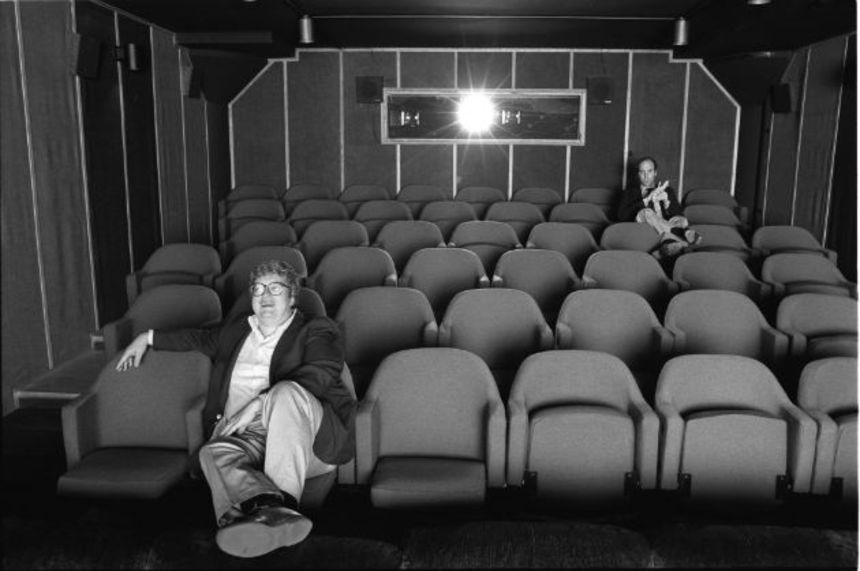 If you do what I do -- cherish film and have the chutzpah to tell other people what you think about them -- then you're almost certainly indebted to Roger Ebert. I've documented at length the effect that he had on both my personal and professional life previously, but for any cinephile, in some way you have to confront the work of Ebert.

He was much more than the binary position of his thumb, of course. Gregarious, hard headed, an alcoholic, and a champion of innumerable films and filmmakers, he was a person of great contradiction, the sum totaling up to the life of a remarkable man.

Steve James' documentary Life Itself does as good a job as anyone could have done in presenting these contradictions. It delves into the more public aspects of the man's life, but also is constructed in a way that provides great intimacy during the final months of his life.

In some of the film's most hard-hitting moments, we see Ebert in hospital, having suction applied to a tube coming out of his bandaged neck. Extreme closeups of the flap of skin that was the remainder of his lower jaw show signs of bruising. It's unflattering, but it's raw and uncompromising. It's also exactly the way Ebert wanted it to be.

In a nice touch, the film shows a number of back-and-forth emails sent between director and subject. Ebert was used to getting his own way, but obviously respected very much the role of the director in this project. After this most shocking of visuals, the wretched sound of viscous liquid being sucked out by plastic tube, a note comes on screen, Ebert letting James know how pleased that the suction was captured for the film.

Ebert wasn't afraid to say when something sucked. He also wasn't afraid to show the indignities that he was suffering from in the last years of his life, making the explosion of written output that resulted with the loss of his speaking voice all the more remarkable. 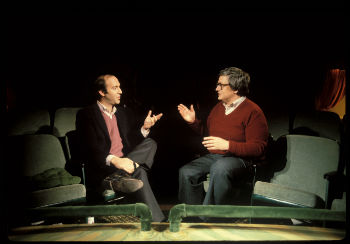 The film includes a nice overview of Ebert's remarkable career, including many behind-the-scenes looks at his collaboration with Gene Siskel. While this overview follows the patterns of many similar docs, James is deft in the way that he keeps the narrative engaging. We see the real schmuck that Ebert could be, the almost prissy way he'd interact behind the scenes. With enjoyable talking head interviews, we hear from Ebert's friends, colleagues and family members, drawing a rich picture of the man.

It's fair to say that the film ends up with a highly positive view of the man and his life, but this isn't simply the result of bias or being too close to the subject. Even the most churlish can recognize that James has crafted a nuanced look at his friend, and this is a far cry from a hagiography.

The film ends with a number of questions that Ebert himself was physically unable to answer before he died, and perhaps those answers may well have provided the most interesting elements from a film perspective. It would be unfair to judge the film for what could have been, but it's another aspect of loss that the film helps expose, the what-could-have-been contained within the project itself.

When you have the likes of Martin Scorsese choking up on screen, it's clear that we're seeing something remarkable captured. As a doc, the arc of the story flows well, the interviews compelling and well shot, the portrait of the man complex and engaging. It's another remarkable film from a truly remarkable filmmaker.

Yes, the film plays as part eulogy, part roast. Mostly, however, it plays as a celebration, a way of showcasing this talent to generations of film goers to come. It may not uncover anything profound about what made Ebert such an astonishingly gifted critic, but as a whole it certainly may draw future viewers to seek out his writing, much as critics of my generation parse through tattered copies of Pauline Kael's writing, amused by times when she got it so wrong, humbled when she got it so right.

I've written that even when I disagreed with Ebert about a given film, I always learned something. The power of his rhetoric was often humbling, and it would be easy to lose oneself in the persuasion of the argument, sometimes forgetting one's own reaction to a given film.

James' documentary may not be definitive, it may not provide the complete overview of this remarkable man that some may desire. Yet it speaks to James' skill as a documentarian that the film feels as thorough as it does. We get a lot with this film, bar gossip mixed with unbridled praise. As one of Ebert's friends says, "He wasn't that nice". Perhaps not, perhaps the myth still somewhat overwhelms the man. Or perhaps what was nice about him was that sometimes he was a shit, sometimes a saint. The film gives us all this, and much more.

Having screened with a highly emotional crowd, it's hard to be entirely objective about the film. But if all you learn is that Ebert was a fantastic writer, a vital presence on television, a professor, a drunk, and a lover of big-breasted women, well, there are worse epitaphs.

Roger Ebert was loved by many. This film loves Ebert, but it does not worship him. It lets him tell his story his way, via the lines from his memoir. Read by a convincing voice actor, it was eerie to hear the timbre of voice again reading words written after that remarkable instrument was taken from him. 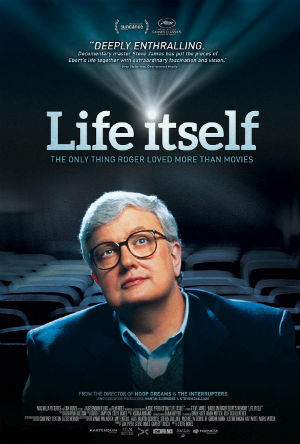 When Ebert lost his voice, we had an explosion of the frequency of his writing. Tweets, blog posts, even reviews seem to increase. No one would wish this upon him, but the mixed blessing is that in the last years of his life we got more of him. The film takes this even further, providing that startling, sometimes off-putting intimacy. We see the frustration, we find the anger and feel his suffering, lean in as his weak steps fall short of the mark. But we also see the twinkle in his eye when he raises a wrinkled thumb after suction is again applied on camera. He again seems pleased, happy that the story was to be told, confident that it was about to be told well by a remarkable documentarian.

I wonder what Ebert would have written about this film, just as, frankly, I wonder about all films I see. Likely he would have said something witty, accessible and richly literate. He may even have uncovered something I missed my first time through. He would have been fair, scathing if necessary, celebratory if required. He wasn't adverse to shitting on a film, yet like most of us was far more satisfied when he could revel in something tremendous.

I'm finding I'm becoming more influenced by Ebert after his death, missing his presence more, not less. I would have loved for him to have seen Gravity, to have had him discuss passionately 12 Years A Slave. I also would have loved him to answer the rich questions that James asks, only to have Ebert's voice falter towards the end. If the film leaves me wanting, it's in this way, I wanted more, much more from this towering figure for people like myself.

Yet like the films themselves and life itself, things are often judged by their conclusion. Falter at the end, and you're left both unsatisfied and more ready to dismiss the earlier elements. Ebert went out fighting, went out writing, went out talking about the movies he loved surrounded by the people who loved him. This film loves its subject in a way that is both adult and mature, a wide-eyed love shaped by an almost palpable desire to make it in a way that the highly critical and intellectually rigourous subject would have liked.

I think it's fair to conjecture -- Ebert would have liked the film very much. It's just a shame he wasn't with us to watch it in that room where the love for this man from strangers and family alike was almost overwhelming. It's pretty clear that he would have smiled, done that "happy dance" he would use to express his joy, and raise once more his thumb to the sky.

Review originally published during the Sundance Film Festival in January 2014. The film opens in select U.S. theaters on Friday, July 4, via Magnolia Pictures. It will also be available to watch via various Video On Demand platforms. Visit the official site for more information.

Do you feel this content is inappropriate or infringes upon your rights? Click here to report it, or see our DMCA policy.
Documentaryfilm criticGene SiskelRoger EbertSteve JamesMartin ScorseseWerner HerzogAva DuVernayBiography