Blu-ray Review: The POSSESSION Release By Mondo Vision Owns All Others 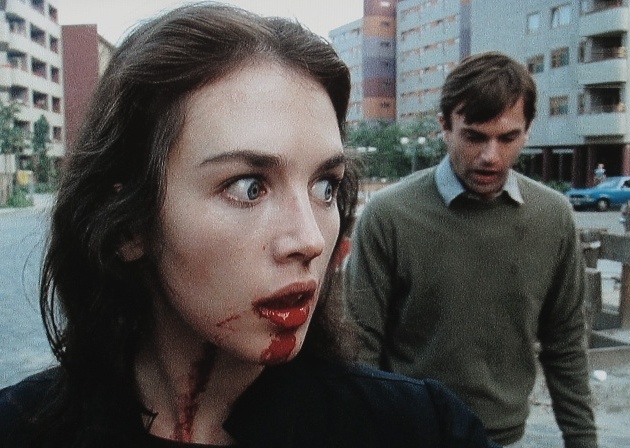 (It's a psychological art-house drama, but with rather more gore, explosions and tentacle-sex than is usual in this genre...)

Ever since Criterion coined the term "Special Edition" for some of their laserdiscs, over two decades ago, the concept has caught the imagination of fans. Everyone will have one movie in their heart, one which they would want to get "special treatment". But it's rare to see it actually done, at least in such a way that all your wishes for that film are granted.

Well, if you are a fan of Andrzej Zulawski's film Possession, I have some great news for you: Mondo Vision has released an edition of the film which is so special, extensive, and thorough, that I cannot imagine fans of the film to be anything but delighted.

Here is a full review and gallery, because the set is also exquisitely packaged. So, what is Possession about? Read on...

After a long business trip, Marc returns to his estranged wife Anna in West-Berlin. Their relationship is stale and strained, both people having grown to loath each other over time. Yet Marc is still very possessive of Anna. When he discovers she has had a long on-going affair with another man in his absence, Marc sinks into abuse and despair, and Anna leaves for an apartment of her own.

But when Marc confronts Anna's lover, he discovers she is actually no longer involved with either of them. Instead, she is jealously hiding a new lover, living with her: a tentacled creature of almost Cthulhian appearance and intent... 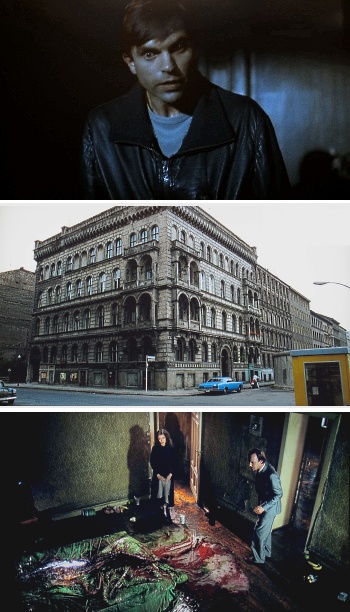 As is usual with films by Andrzej Zulawski, Possession leaves viewers with plenty of food for thought. It seems to start as a depiction of the unraveling of a dysfunctional marriage, but that is only after you've been treated to extensive shots of the Berlin Wall and the memorials for the people who died trying to cross it. West Berlin looks like a tiny island of desperately retained normalcy, in a sea of suffocating oppression, and most of the windows in the film only show a view on the Wall, encroaching all actions and thoughts.

Upon its release, this made for an extremely disturbing film. For me it very much captures the feeling of that time in the early eighties, when we in Western Europe could almost see the wall for ourselves (it was just a few hours drive to the East), and a nuclear apocalypse with the Warschau Pact seemed an unavoidable certainty.

But that is not all: as the film progresses, both Marc and Anna somehow manage to create an idealized version of each other for themselves, to often disastrous effect, allowing for lots of reflections on the nature of love and relationships.

And there is even more going on in the background. In fact, the film is so full of themes and ideas, it suffers from it. There is just too much to take on in a single setting. Zulawski was a bitter, bitter man when he wrote the script, and seemingly hurled all of his frustrations at the viewer, in one big batch. Thankfully, Possession is also filled with a bleak, black sense of humour, or it would have become unwatchable.

Filmed on a tight budget and an even tighter schedule, there is a clipped, controlled but rushed quality to Possession. Some scenes look fantastic and natural, others tense and theatrical. This see-sawing has its effect on the performances of the main actors. Sam Neill and Isabelle Adjani are required (and sometimes fail) to remain believable during increasingly bizarre developments. Indeed, the acting is almost comically over-the-top at times.

It never gets funny though. If you look past the monster, there is a lot of love, pain and anguish to be seen. In some scenes, especially the most hysterical ones, the bile being spewed seems all too real. In the infamous "Subway Miscarriage" scene, Adjani's character becomes literally barking mad, a sight to behold, and probably what (deservedly) won her the Golden Palm in Cannes for Best Actress that year.

All in all this makes Possession an interesting film, but one which is hard to love. I love having seen it, though!

Mondo Vision have released Possession as a regionfree Blu-ray. It is labeled as a special edition, and the über-pimped version in the gallery here is the Limited Edition, of which there are only 2,000. Mondo proudly states this release features a 2k digital transfer, and that boast doesn't look idle: every single screenshot I've seen in articles about the film actually looks sharper on this Blu-ray.

What's even more important is that this is the 124 minute uncut version. When Possession was originally distributed in North America, 40 minutes were cut from it, the remainder re-scored and re-edited, and additional visual effects like solarisation were added. Mentioning this version is a good way to get Andrzej Zulawski angry, apparently.
The cut on this Blu-ray is the real thing though, and fully approved by Zulawski, who even provided a fantastic commentary track for it.

Audio is the original uncompressed English 1.0, and there are subtitles available in English, Spanish and French. As an uncommon luxury, you even have the choice between white or yellow subtitles!
Interestingly, there is also an alternative soundtrack which features some additional music. This track was never used by Zulawski, but nevertheless made its way on several releases in the eighties, and it's a cool extra to have.

Speaking of extras: this set is stacked! On the physical side, the top contents are a great 84-page booklet, and the CD soundtrack. On top of that you get art cards, replicas of the US-release lobby cards and the Japanese flyer. Very, very cool.

As for the extras on the disc, the commentary and extra soundtrack have already been mentioned. Zulawski is fond of telling stories, some of them rather tall, and his track is rife with anecdote. He mentions loads of interesting and fun facts too, so it never becomes boring to listen to him. As Possession is sometimes hard to comprehend, Zulawski pointing out themes and details sure enriches a repeat viewing.

Other extras include a 50-minute making-of documentary, a long video-interview with Zulawski, and a 20-minute talk with a translator of some of Zulawski's books, who shares his experiences of working closely with him. That last one isn't all that directly connected to Possession, but it does accentuate what Zulawski is like to work with, and provides additional insight.

Basically all you'd want as a fan is here, bar one thing: the alternate US release cut of the film.
This cut version is often mentioned in the extras, and its omission in this set does stand out a bit, if only to be able to boo and hiss at it, or to see what exactly was cut and changed.
Mondo Visual do own a transfer, based on a 35-mm print of this cut, and planned initially to include it, but sadly were advised to drop it. On Mondo Vision's website they do note, and I quote: "For anyone interested to witness this travesty, we are considering to make it available on-line free of charge. Stay tuned for more details."
So, there!

This film is an early eighties oddity of European cinema, and maybe not an entirely successful one, as it is hard to catch on to its many ideas and subtexts. But Possession does contain several classic scenes, and an acting tour-de-force by Isabelle Adjani which needs to be seen to be believed.

Mondo Vision's release stands high above all other releases of this film, and the Limited Edition is now one of the most prized possessions (haha) in my collection.
Most definitely recommended!


Note for those who wish to try and purchase this: Mondo Vision does not use the most regularly known on-line retailers for these. Instead, they are exclusively sold through Toufaan (click here for the link). 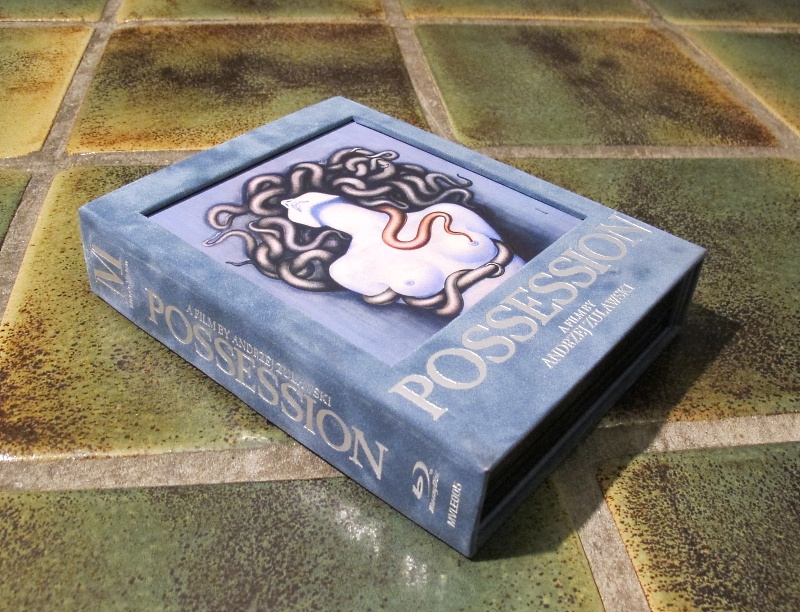 The packaging of the Limited Edition is gorgeous, one of the prettiest I've ever seen. The great and famous original movie poster is featured on the box, but is again framed by a thick velvet-covered outer slipcase. 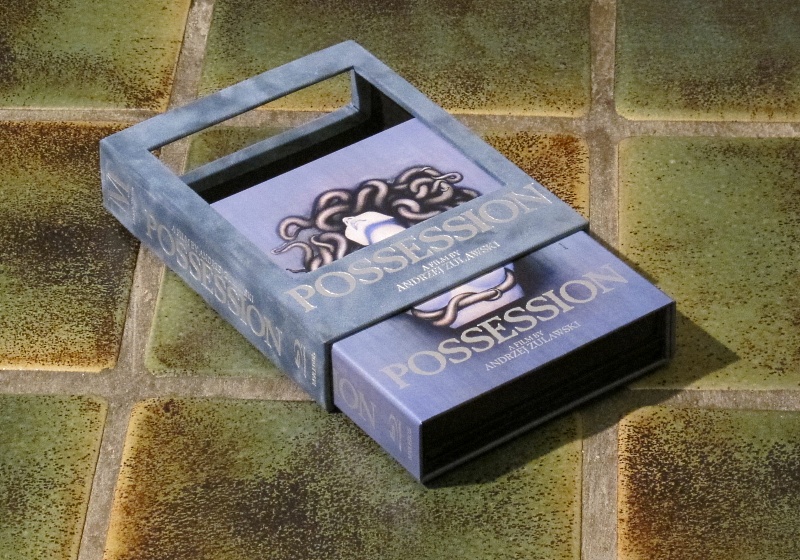 Sliding the box out of its outer slipcase. 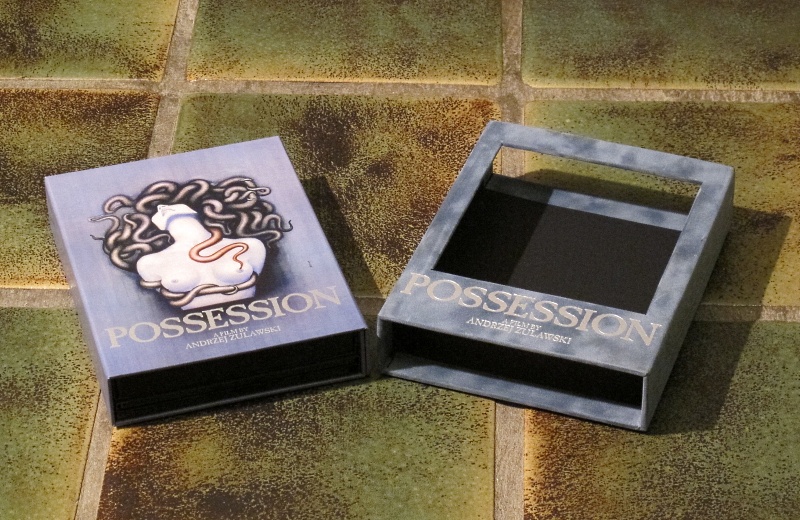 The inner box, in the nude, so to speak. 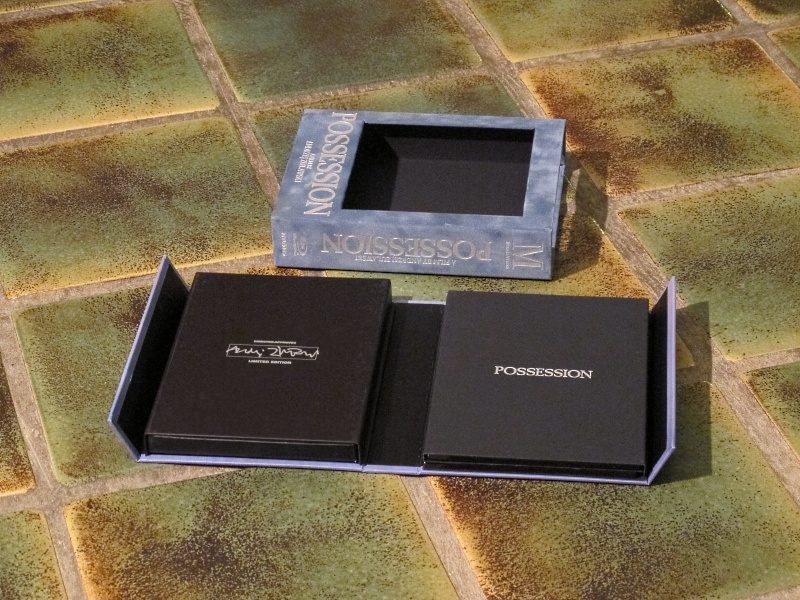 The box is closed through magnets, and opening it shows two inner compartments.

Opening the compartments reveals the physical extras, and the two discs. One disc is the Blu-ray, the other one is the CD soundtrack. 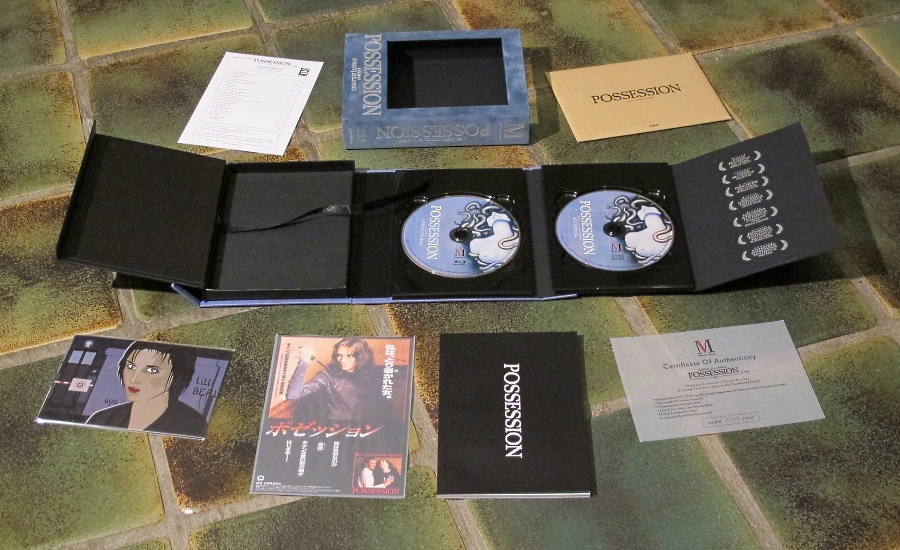 Clearing out the left compartment: there are artcards, replicas of the US lobby cards, a replica of the Japanese flyer, a certificate of authenticity, and last-but-definitely-not-least the thick booklet. 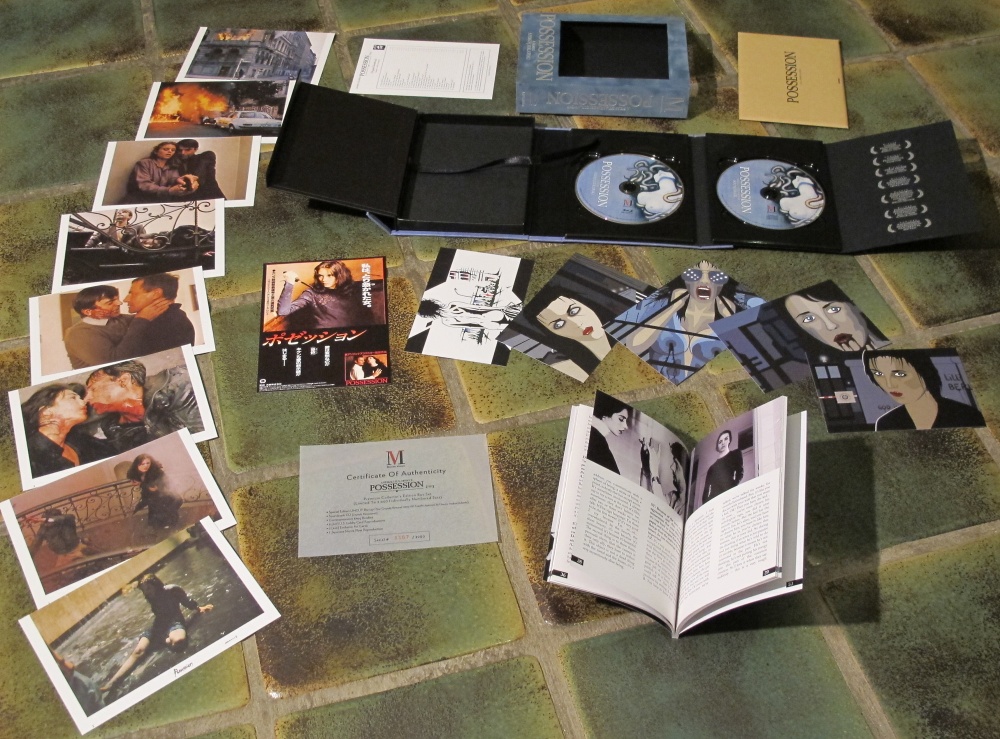 All contents opened and spread out. Whoa!! 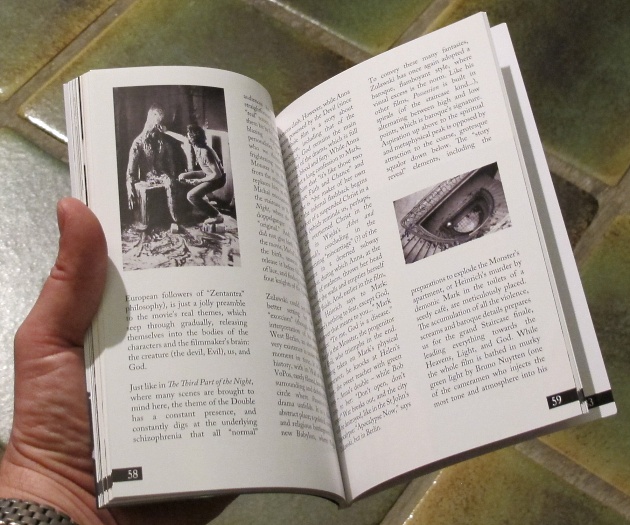 A closer look at the excellent booklet. It's 84 pages and chock full of interviews, articles and photographs, several of which are exclusive to this edition. We're talking Arrow and Eureka MOC type quality here. 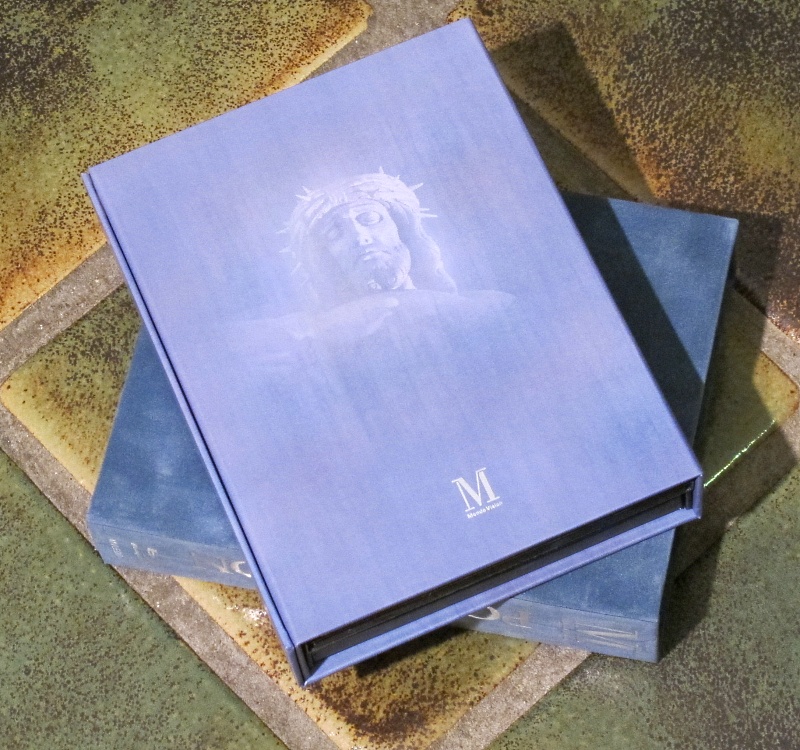 Do you feel this content is inappropriate or infringes upon your rights? Click here to report it, or see our DMCA policy.
Andrzej ZulawskiBerlin Wall.Isabelle AdjaniPossessionSam Neill