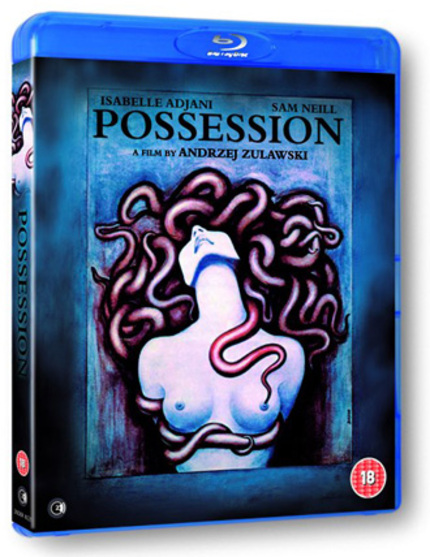 There are few films quite as harrowing and pulsatingly unpleasant as Andrzej Zulawski's nightmarish Possession. A marriage on the rocks is never a pretty thing to witness, but when you add madness, monsters, and mania into the mix, it becomes downright scary.

Relative newcomer to the genre block Second Sight Films in the UK is the first company to get their paws on Possession for Blu-ray and I couldn't be more excited after having experienced their fantastic releases so far. Their Blu-ray discs of The Return of the Living Dead, Basket Case, and From Beyond have all earned my highest marks, and having seen some stills of the restoration of Possession, I think we're all in for a real treat. They are also adding some really great sounding bonus materials, which makes this an even more exciting release to look forward to. Here are the details from Second Sight:

'An unsung masterpiece...the film that prefigures everything that's in Antichrist'
Mark Kermode

'No Exorcist can handle Possession'
Rogerebert.com

A horror film like no other, Possession, directed by Andrzej Żuławski, is an intense shocking experience that was originally banned in the UK on the notorious 'Video Nasties' list. Now this hugely controversial film makes its long-awaited Blu-ray debut courtesy of Second Sight Films.

Possession was nominated for a BAFTA and the Palme d'Or and stars Isabelle Adjani (Subway, La Reine Margot), who's astonishing performance earned her Best Actress awards at the Cannes Film Festival and the French Césars alongside Sam Neill (Jurassic Park, Omen III - The Final Conflict). The film features stunning special effects by Carlo Rambaldi (Alien, E.T) and comes to Blu-ray with an amazing array of bonus features on 29 July 2013.

Extras include:
THE OTHER SIDE OF THE WALL: THE MAKING OF POSSESSION
ANDRZEJ ZULAWSKI INTERVIEW
REPOSSESSED - The film's UK and US reception, the 'video nasties' furore and the US recut
A DIVIDED CITY - The Berlin locations
THE SOUNDS OF POSSESSION - An exclusive interview with with composer Andrzej Korzynski about his work relationship with Andrzej Zulawski
OUR FRIEND IN THE WEST - An exclusive interview with legendary producer Christian Ferry
BASHA - A new featurette on Polish artist Barbara 'Basha' Baranowska who created the famed poster for the film.
THEATRICAL TRAILER