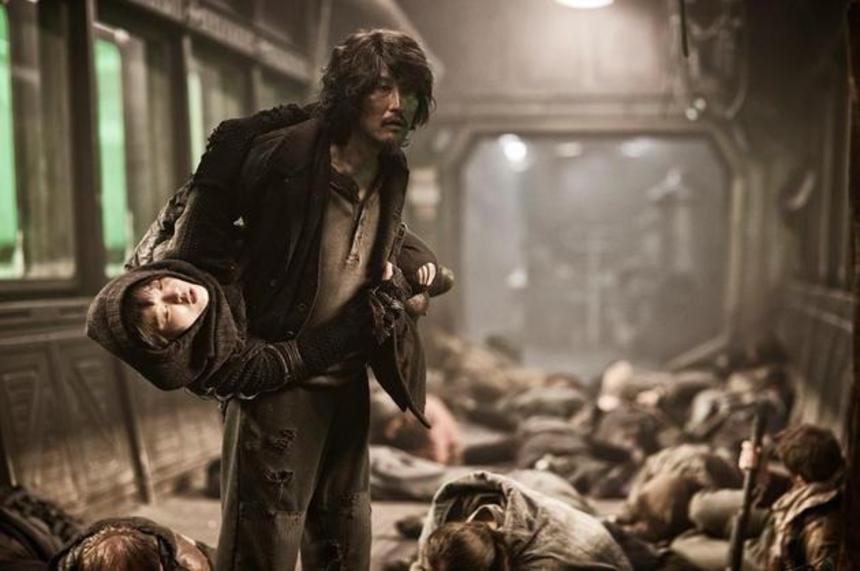 Cinema is a medium of motion and if anyone understands this, it appears to be Bong Joon-ho, whose visionary new work is a demented and stunning thrillride. In his first production outside his native South Korea, Bong has delivered his most ambitious project yet, and proves more than capable of handling an international, multilingual cast and a large budget.

When a global warming solution backfires, the Earth is enveloped in a new Ice Age which almost annihilates the human race. The few thousand survivors live aboard a lone train that perpetually circumnavigates the otherwise dead planet. The train's creator, Wilford, leads from the engine at the front, while the tail is inhabited by low class citizens. Each day they are subjected to humiliating atrocities, and at their wits' end, a revolt finally erupts.

In a narrative almost completely bereft of melodrama, Bong is never afraid to put his characters through hell or kill them off in an instant. The stakes are high, the space confined and the time limited. On the train, there is no room for mistakes. Reason trounces emotion at every turn, keeping the film hurtling along at breakneck speed. In Snowpiercer, movement equals life and everything, down to thin slivers of light and a snowflake floating by a window, is in constant motion. Shadowy backgrounds flit by during the opening credits before we are introduced to a train that hasn't stopped moving in 17 years. The entire setting of the film is always belting forward, and once the revolt begins, the protagonists push ahead within it. If the revolt slows down, it will fail and if the train stops, its inhabitants will freeze: Stopping for even a moment is certain death.

As expected, spatial dynamics play a huge role in Snowpiercer, which would all be for naught were it not for the film's stunning and endlessly inventive mise-en-scene. Filming an ambitious sci-fi in confined spaces is no small feat and director of photography Hong Kyung-pyo has done a magnificent job of bringing each of the train's carriages to life with rich and eclectic cinematography. Combined with Ondrej Nekvasil's excellent production design, Steve M. Choe's layered editing and Marco Betrami's evocative and multifaceted score, the film's technical specs are a feast for the senses. 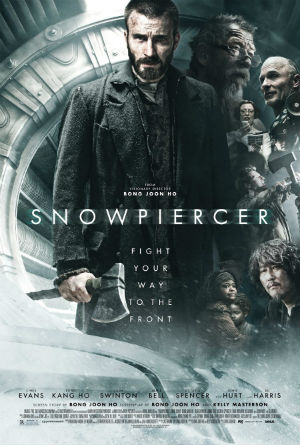 Bong has assembled an eclectic cast and each of his actors is well matched to their characters, yet many go beyond the traditional confines of their roles, delighting and horrifying us in surprising ways. Chris Evans, in between Captain America roles, plays the reluctant working class hero to a tee, and shines in the film's back half, when the script gifts him some unexpectedly weighty moments.

Under her false teeth, wig and pasty makeup, Tilda Swinton is uproarious as the train's unhinged prime minister. Measured and full of delightful ticks, her memorable Yorkshire madam steals every scene she's in. John Hurt's performance as the elderly patriarch of the tail section is marked by raspy gravitas and a mournful gaze. Bong stalwart Song Kang-ho effortlessly keeps up with his English-speaking co-stars, strutting and shuffling about, providing comic relief and a dash of cool as the train's incarcerated former chief of security.

Though it was never going to be a sunny ride, the sheer desperation, violence and madness on display throughout Snowpiercer's 125 minutes make it one of the most dystopian films we've seen in quite some time. As we proceed forward through the train's carriages, from the grimy tail, through the cartoonish school, idyllic green house and debauched clubs, so too the film's tone, story and characters evolve and enrichen.

Following the disappointment of Kim Jee-woon's The Last Stand and the lukewarm reception of Park Chan-wook's meticulous chamber piece Stoker, Bong Joon-ho has created with Snowpiercer the most accomplished overseas work of any Korean filmmaker to-date. While it remains to be seen whether or not mainstream western audiences will embrace Bong's dark and ferocious genre film, in many ways he's already beaten Hollywood at its own game. A tour de force of science fiction, Snowpiercer is a singular and breathtaking cinematic experience.

Review originally published in connection with the film's theatrical release in South Korea in July 2013. Snowpiercer opens in theaters across the U.S. on Friday, June 27.

Do you feel this content is inappropriate or infringes upon your rights? Click here to report it, or see our DMCA policy.
Bong Joon-hoChris EvansJohn HurtTilda Swinton