SNOWPIERCER Gets An Action-Packed Red Band US Trailer 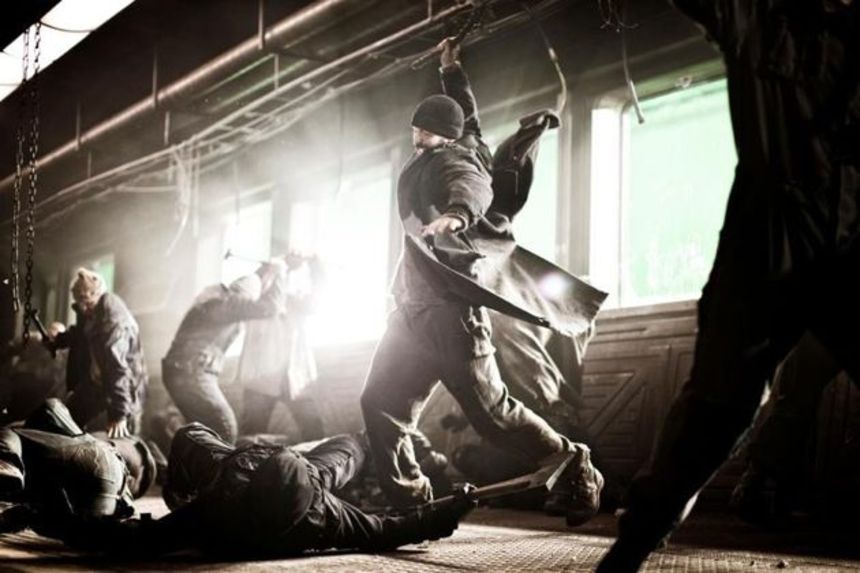 Almost a year since its debut in director Bong Joon-ho's native South Korea last summer, futuristic thriller Snowpiercer finally arrives on US shores on 27 June, courtesy of Radius TWC. While Harvey Weinstein ultimately lost his battle to re-edit the film into a leaner, faster version better suited to the simple-minded tastes of middle America, this new trailer certainly does its best to market the film as a non-stop action juggernaut.
While there certainly is plenty of violent mayhem in Bong's film, which is adapted from Jacques Lob's French comic book series and stars a raft of talent including Chris Evans, Song Kang-ho and Tilda Swinton, the film finds plenty of time for contemplation and meditation on the state of humanity in a dystopian future where a new ice age has forced all Earth's survivors to live aboard a single, constantly speeding train.
However, fear not, it is the full version of Snowpiercer that is speeding your way, and you all owe it to yourselves to jump on board just as soon as you can. Check out the new US red band trailer below, then click here for all our coverage of the film, including Pierce's review, a look at the source comic book and a couple of interviews with director Bong Joon-ho.
Sign-In to Vote
Tweet 0 Submit

Do you feel this content is inappropriate or infringes upon your rights? Click here to report it, or see our DMCA policy.
bong joon-hochris evansjamie bellscience fictionsnowpiercersong kang-hotilda swinton

This is the first time I've been let down by the masterful Bong Joon-Ho. Snowpiercer has some very cool and original moments throughout, and Song Kang-Ho is absolutely terrific (as always), but overall it's a mess and not nearly as clever I as thought it'd be. The last half hour is pretty much non-stop exposition reminiscent of the nonsensical Architect scene from The Matrix Reloaded.
Hopefully the golden trio of Korean cinema stays out of the US from now on, all of their efforts pale in comparison to their Korean counterparts.

Sorry mate, but I loved this movie and way more so than his native land efforts to be honest. To each their own, but I hope he continues to work in the West...

I'd like to watch this and I hope it will be kickin' ass!

That was a really exciting trailer! Can't wait.

saw it twice in Jiffest last year! it's not that action heavy like the trailer suggested, or they've cut it to be one?

They've certainly cut the trailer to sell the action but the film itself is being released in the US in Bong's full director's cut.

I don't think the US had anything to do with this production. I thought it was a Korean/European venture.

Snowpiercer over Memories of Murder, or The Host?

Not even gonna say anything, that says it all.

Actually they did, but it's a collaboration between South-Korea, USA, France and the Czech Republic, apparently.

Yes Mr. Hipster, better than The Host and Mother. Memories of Murder I haven't seen.

Haha, no need to get pissy, missy.
Personally, I didn't really dig Mother that much either, still more than Snowpiercer though. Hell, I even liked Barking Dogs Never Bite better.

I think there are enough other directors who could make a cool hollywood sci-fi flick like "Snowpiercer" than a brilliant thriller like "Memories of Murder".
Saying Bong Joon-ho should do more of these kind of films is like saying that Martin Scorsese should make more kiddy films like Hugo.

One of these days I'm going to find the time to get my Mother bluray off the shelf and actually watch the damn thing ...

Said with the sneer of someone without children ...

On an official production level I don't believe that the US takes credit as a producing nation but the Weinstein's threw in a good chunk of money at the outset that allowed the film to happen, yes. Without them it doesn't exist in any form.

I don't think anyone is saying Bong should do "more of these kind of films". Bong if 4-for-4 in my book and a big part of that is because each film is so different to each other and shows Bong challenging himself to explore new genres and new directions. As such, comparing Memories Of Murder to Snowpiercer is a pretty redundant exercise. Both films are great examples of what they are trying to do, and if Bong continues to make great films, we should all be very happy indeed.

Oh, it's worth it. Dig that bad boy out right now.

This one has always looked to me kind of forced and obvious. Margaret Thatcher was decades ago, after all.
Hopefully I'll be proven wrong.

You can always tell you're on the winning side of any discussion when your opponent whips out "hipster."

Don't ever say that. The Martin Scorsese thing you just said. Say anything else you want. Anything. I don't mind.

Haha yeah. But now I'm a bit sad she left, I thought I'd found a Rosalind Russell to my Cary Grant. :'(

Still, there are bits in SNOWPIERCER which are typically Bong. I love that he made both SNOWPIERCER and MEMORIES OF MURDER.

Marshy, I have some very, VERY good news for you!

You can always tell who lost the argument before it began your "opponent" whips out "kinda says it all."

Movies, like any art, are subjective. Failure to understand that simple fact is a reflection of the person expressing that ignorance.