Destroy All Monsters: How To Train Your Alpha 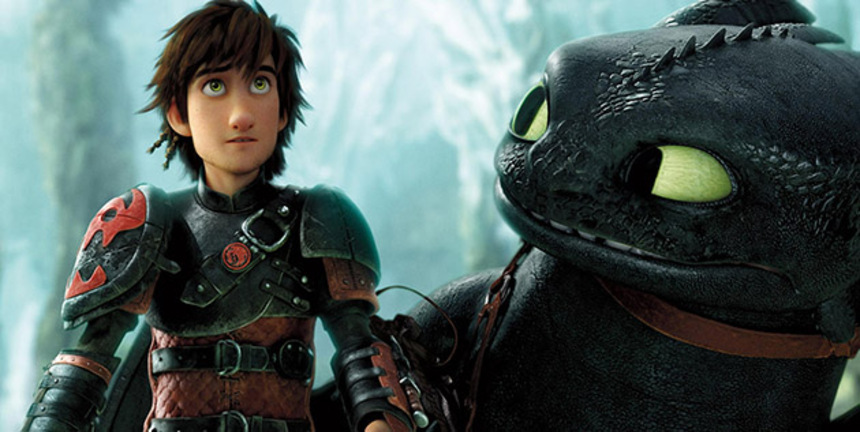 Spoilers for How To Train Your Dragon 2.

One of the reasons The LEGO Movie got my back so completely up was simply by dint of its intended audience. I'm perfectly willing to deal with a Hollywood whose issues of representation are, generally speaking, a hot mess -- but when you're making a movie about creativity, inclusion and play aimed directly at children, it more than somewhat pisses me off when your definition of "children" may or may not include "girls."

How To Train Your Dragon 2 has no better idea what to do with the girls than LEGO did; it has three great female characters in Astrid, Valka and Ruffnut, but struggles to meaningfully include them in the outcome of the (boys') story. The film, and its predecessor, fall squarely into the oldschool as childrens' stories: they're about a young boy learning to be a man. There are a lot of these around, and they tend to gently (or not so gently) reinforce the traditional Romantic virtues about gender in specific or abstract ways. (No squire has ever ascended to knighthood so directly along gender lines than our friend Luke Skywalker, who impregnated the giant Space Ova with his proton torpedoes by way of a starfighter so phallic it literally came adorned with a dick head.)

But the How To Train Your Dragon franchise has gamely flown in the face of traditional boy-ness from frame one. The first film was entirely built on a question of boy-ness -- or in that case, on the questioned manliness of Hiccup (Jay Baruchel), prince of a Viking society, who wanted to impress his community (and his exceedingly male father, Stoick the Vast, who was indeed both stoic and vast), but who simply did not fit within the local stereotype of what makes a man a man. (In the case of the Vikings of Berk, it was the willingness to kill a bunch of things, and the brawn to let one do so.)

The virtues that Hiccup not only embodied but ultimately saw through to acceptance -- brains over brawn; kindness to animals and the environment; symbiotic relationships -- were a wholehearted rejection of Alpha Maleness in every regard, not just in Berk, but in the landscape of popular culture as well. The new sequel, How To Train Your Dragon 2, takes the proverbial dragon and flies with it.

Dragon 2 doesn't just continue the throughlines of its predecessor but indeed amplifies them. It multiplies the first film's model of gender role modelling across not just its human cast, but its dragon cast as well.

Five years on from the events of How To Train Your Dragon, Hiccup is all grown up (i.e. he has stubble and a girlfriend now, though apparently no sex drive). He continues to live outside the general mold of the Vikings of Berk, at least on a physical level: he's a pencil, and they're all inverted triangles. Nonetheless, his brokering peace between humans and dragons has radically transformed his society, as any true hero's journey must. Hiccup is next in line to be chief, a master of dragon training, and if he's quibbling somewhat about the shouldering of his responsibilities, he's otherwise come along just fine. Heck, I'm proud of him -- and he's a bunch of pixels, none of whom I know personally.

Hiccup makes maps. While his friends race dragons and run business in Berk, Hiccup is off with his dragon, Toothless, exploring the reaches of his ecosystem, which would previously have been unassailable by shipbound humans. Hiccup still has something of a terror of his father, but in a terrific monologue late in the film, he reveals its source: he fears the best parts of his father, and his own inadequacy to live up to them. How many men's false bluster is built out of the same, unacknowledged fear?

Instability is introduced into the system when Hiccup, ever searching, finds his mother, thought lost twenty years before. Played by Cate Blanchett (and at least halfway crazy), Valka is the missing piece of Hiccup's ill-fitting Viking identity. Valka shares her son's talent for dragon-wrangling, and his deep empathy for the hearts and minds of the wordless creatures.

It's a credit to the film that any angst on Hiccup or Stoick's part regarding Valka's twenty-year absence is kept minimal; in fact, both men are far happier to have Val back in their lives than angry that she ever left. If the story is about Hiccup's identity -- itself a map, albeit one which Valka literally and figuratively shows is far larger than Hiccup thought -- then Val and Stoick are the two most important continents on it. Finally, with the complete topography to look at, this boy makes sense.

Central to the emerging plot is a creature called the Bewilderbeast, which Valka identifies as the Alpha Male of dragonkind, at a time in our popular culture when the concept of Alpha Maleness has been appropriated in other, more alarming areas. In a complex and magnificent battle in the center of Dragon 2, the living Alpha of the dragons is challenged, and defeated, by a second Bewilderbeast, this one under the thrall of the evil Drago Bludvist (Djimon Hounsou), who uses the evil Alpha to turn all dragons against their human companions.

It is here that the film hits its most complex and disturbing beat. Under the influence of the malign Alpha Male, Hiccup's companion and best friend -- the astonishingly adorable black dragon, Toothless -- turns on the humans and tries to kill Hiccup, succeeding only in killing Hiccup's father, Stoick, instead.

All along in both films, Toothless has been as much a refusal of traditional male traits as his buddy, Hiccup. Far more than merely being adorable, the design and animation of Toothless make no concession to unearned, boy-safe badassery. He's cute, loving, loyal, lazy, and a wide-open emotional grin. Toothless is intentionally more of a cat than a dog, as it were, and his potential ferocity is less a foreground element of his personality than any other cinematic dragon I can name. In the dragon playground, I'd imagine Toothless would get bullied by Smaug, Drogon, and Vermithrax Pejorative, simply out of his apparent unwillingness to be a fire-breathing dick about everything.

And so, the death of Stoick at the hands of the series' hero dragon -- himself under the spell of the evil Alpha Male -- is as ripe with meaning about manhood as the gruesome opening sequences of Maleficent were about womanhood. Given a toxic example of masculinity from which to draw instinctual behavioural responses, Toothless steps entirely outside his established personality and commits the Dragon franchise's bloodiest, most horrific act.

It's a crisis that the film can only buy back in the most exhilarating, courageous way possible: by pinning the resolution of the story on Toothless' ability to defy, and ultimately overcome, the influence of the evil Alpha Male. (This movie was released on Father's Day weekend?!) How To Train Your Dragon does not say that the influence of parents, surrogate and not, is irrelevant; but for both Hiccup and now Toothless, there has come a moment where they've had to step outside nurture and let a little nature rule.

(In a likely unintentional but nonetheless lovely visual pairing for the summer blockbusters of 2014, Toothless even gets his kaiju on: not only does he win the day by his force of will, but in so doing, the black Night Fury turns Godzilla, illuminating the spines on his back in neon blue as he overthrows the Bewilderbeast and becomes the new, fitter role model for the dragons of Berk. Roaaaarrrr!)

It's a beguiling trick that the Dragon films have now pulled off twice, writ large on the big screen: be the man you are, not the man the world (or your father, or the Alpha Bewilderbeast) is telling you to be. This is a story about maps, but in both films --Hiccup's dragon-flying cheat-sheet in film one; his map of the Viking countryside in film two -- the maps only get you so far. No, these movies don't have much to do with their girls, but they challenge their young boys to examine their influences, and become better young men. They're needed.

Destroy All Monsters is a weekly column on Hollywood and pop culture. Matt Brown is in Toronto and taking a summertime break from twitter.

More about How To Train Your Dragon 2