Review: HOW TO TRAIN YOUR DRAGON 2, An Impeccably Crafted Fairy Tale 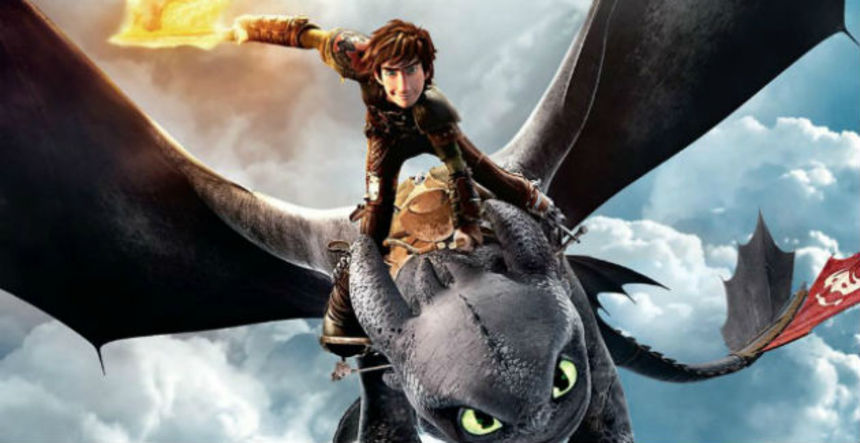 Ok, I'm a sucker for this film. There, I said it to get it out of the way.

My affection for the How To Train Your Dragon series comes down to a particularly personal connection - their design for "Toothless", the (semi)trained dragon in question, is kind of a dead ringer for my cat.

Now, objectively, one shouldn't fall for a film that reminds one of their pet. Still, if the Coen Bros. can manipulate the hell out of my emotions with Inside Llewyn Davis, why can't the crazy cats at Dreamworks poke at my affection for felines with their character design?

Most critters in films tend to take on traditionally dog-like characteristics. It's an easy choice to make - notions of unconditional loyalty and blind obedience are excellent factors for many sidekicks. Even equine companions often take on a dog-like character (think War Horse). Heck, the majority of dragons are treated as canine-like pets. But the unique "Night Fury" Toothless, with its elongated head, pensive movement and giant green eyes, definitely evokes felinity. T.S. Eliott would be pleased, I think.

Cats are by nature fickle, hard to please, often reticent to come close, but extremely affectionate when they want to be. They are, in other words, companions, but on their terms.

So, if the first film hooked me on the character bond between Hiccup (Jay Baruchel) and his dragon buddy, this second film plunges me right into the thick of things. The town of Berk has now fully embraced their dragons, and we are greeted with a strange game of basketball-meets-Quidditch, with sheep as the "ball". Immediately the animation overseen by director Dean DeBlois impresses, with beautifully realized sets, unique and colourful creatures, and sweeping camerawork captured in effective and engaging 3D. Minutes in, and you're lost in Hiccup's world.

DeBlois' co-director from the first Dragon film went off to do the wildly successful The Croods, and it's clear that Dreamworks is definitely at the forefront of creating remarkable and effective animated entertainment. Pixar, long at the forefront of this artform, has seen a few slips recently, a combination of the other studios catching up, and the Disney-owned studio reverting to dreck like Planes. Long past the dreary cash-grabs like Ants or Shrek, Katzenberg and co.'s magic is finally coming to the fore, and we're seeing films the equal or the better of many of the films coming from the mouse house.

In addition to Baruchel, who provides a lovely, attenuated performance once again as our unique protagonist, he's joined by a slew of high-powered veterans of the last film (Jonah Hill, Kristen Wiig, Gerard Butler and Craig Ferguson among them), as well as the introduction of sterling voices from the likes of Cate Blanchett and Djimon Hounsou. It's easy to see why these A-listers climb aboard projects like this - it must be a bit of a thrill, and a bit of an easier task from the drudgery of on-set acting - but that takes nothing away from the performances, proving to be as effective as many of their live-action appearances.

Dragon does a far better than average job in expanding the world of the first film and crafting its own tale, all while keeping very much in line with what has gone before. Like the maps that Hiccup is piecing together, it all feels like a whole, familiar and yet exciting in its expansion of scope. It's a rare balance, one many sequels fail at, and it's to be applauded here.

Yes, the story is highly archetypical, and delves into what some may feel to be hoary clichés. In its defense, the film is straightforward with these elements, never winking at the audience or trying to be self-referential or ironic. At the same time, the film never succumbs to parody or a mash of pulp culture references, the way so many of its ilk tend to devolve into.  This is a fairy tale, a story about a young man and his dragon, and it revels in that simple fact. When we're gliding with Toothless and Hiccup through the clouds, there's a genuine sense of wonder captured, an almost glorious feeling of flight and freedom, reveling in the sheer cinematic pleasure of being taken along for the ride.

Years in the making, and directed down to the pixel, these modern animated films are part of the vanguard of contemporary cinematic entertainment, and while many remain infantile duds or product placement stand-ins, for some of these projects we are seeing the fruits of a genuine golden age in visual storytelling.

While kid friendly, there are still plenty of these moments of flight and fancy to sate even the most jaded of adult audiences. Impeccably crafted, with a strong if familiar story and remarkable visuals, How To Train Your Dragon 2 shows once again that few films are made with the care and craft of these big-budget tentpole animated projects.

How to Train Your Dragon 2

More about How To Train Your Dragon 2