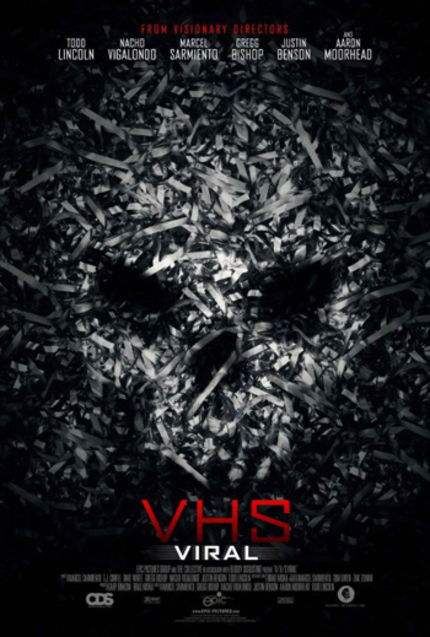 A big day for fans of the V/H/S franchise. The first trailer was released as well as a new poster for the third installment, V/H/S Viral. This trailer will be shown to potential buyers at the market in Cannes. But if you are a Stateside distribution arm looking to get in on the analogue action then I have some bad news for you.
If someone else other than Magnet Releasing acquired U.S. rights to the third V/H/S film, V/H/S Viral, we might have been surprised. Magnet has handled the first two, and very well. So what is to stop them from snatching up the rights to the third one? Magnet is eyeing a Fall release.
And today's press release also had a description of all the segments. The fun part will be guessing which directors did what segment. Once again, the directors attached to this third installment are Nacho Vigalondo (Timecrimes), Marcel Sarmiento (Dead Girl), Gregg Bishop (Dance of the Dead), Justin Benson and Aaron Moorhead (Resolution), and Todd Lincoln (The Apparition).

V/H/S: VIRAL's segments include the story of a deranged illusionist who obtains a magical object of great power, a homemade machine that opens a door to a parallel world, teenage skaters that unwillingly become targets of a Mexican death cult ritual, and a sinister, shadowy organization that is tracking a serial killer. The segments are tied together by the story of a group of fame-obsessed teens following a violent car chase in LA that unwittingly become stars of the next internet sensation.
"V/H/S: VIRAL has the strength of its predecessors and continues to break new ground in the genre," said Magnolia President Eamonn Bowles. "This installment features terrific work from some very talented genre filmmakers."
"We're really excited for audiences to experience the evolution of the VHS brand - and the evolution of male monster genitalia," said Binkow.