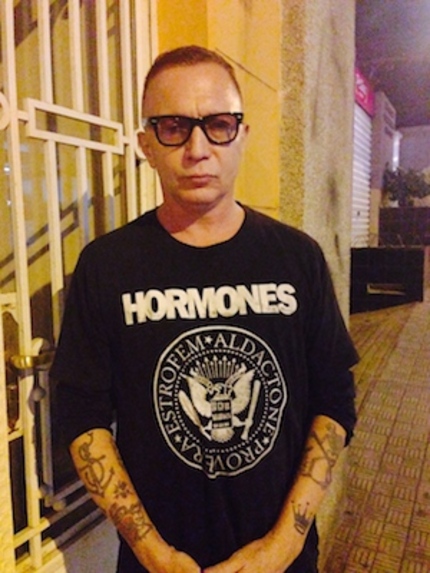 Bruce LaBruce presented at Fantaspoa what is, in his own words, the most accessible and mainstream effort he has made so far. I'm talking about Gerontophilia, a film about an 18-year-old boy with a fetish for old men. I watched it last night during its one and only screening here in Porto Alegre and thought it was very good. The protagonist, Lake (Pier-Gabriel Lajoie), is in the middle of a relationship with a beautiful girl of his own age when he begins working at a nursing home, taking care of the old men. It's a piece that tackles self-discovery and an honest portrait of people in love, without any explicit sex scenes (though still, and obviously, not for everybody). Director LaBruce was kind enough to talk with me for about five minutes after the screening.

ScreenAnarchy: The character of the girl (Lake's girlfriend Desiree, played by Katie Boland) has this list of revolutionary characters. Is this kind of a joke on how revolutionaries are now compared to the real ones from the past?

Bruce LaBruce: Kind of. I mean, it's a reference to one of my previous films, The Raspberry Reich, which was about a female character who thought she was a terrorist, a revolutionary, but she didn't really practice what she preached. I quite often present revolutionary female characters and I think in some ways they are real, heartfelt revolutionaries, like in their hearts. But I also make fun of them because they are so idealistic and a bit naïve. Her list includes female serial killers, rock stars, writers, and terrorists. It's kind of a funny list.

What about a list with Bruce LaBruce's favorite filmmakers and artists in general. Who would be there?

There's a certain road movie element in GERONTOPHILIA. This comes precisely from those seventies films?

Yeah, definitely, I was thinking of a lot of films. Hal Ashby is another seventies filmmaker I like and he made great road movies like Bound for Glory and The Last Detail. I didn't want to make it too much of a road movie, it just happens sort of at the end of the film. But it's always a good narrative devise, the characters off alone together in a series of misadventures.

Can you tell me more about the story of trying to cast HAROLD AND MAUDE's Bud Cort?

Yeah, well, we did talk to Bud Cort, who played Harold (in Harold and Maude), about Gerontophilia. We showed it to quite a few well-known Hollywood actors and they all really liked the script but I think they were maybe a little bit weary when they knew of my reputation of making pornographic films. They maybe would think I would be pushing it in a more pornographic direction.

I think Cort was a bit weary and didn't want to make another Harold and Maude. He is very protective of that film. Actually, the script called for an 81-year-old man as the old man and an 18-year-old for the boy. I really wanted to cast actors with that age. So Walter (Border) is not only a great actor but he was also 81.

What would you prefer, to be known as this transgressive director or as a director who can make a moving piece like GERONTOPHILIA? Or both?

The thing some people misunderstand about some of my previous work is that even though I sometimes make pornographic work or even gore and horror kind of stuff, there's always a very romantic element to the film or a tender aspect. It's interesting for me to make a film that's more accessible to a larger audience because it makes me realize that, you know, if you keep on making just harsh, pornographic films your whole career then you are going to be limited to a certain audience. It's nice to reach a larger audience sometimes. I really like to be both but people don't want you to be both. They want you to choose a side (laughs).