Destroy All Monsters: The Clothes Make The Spider-Man 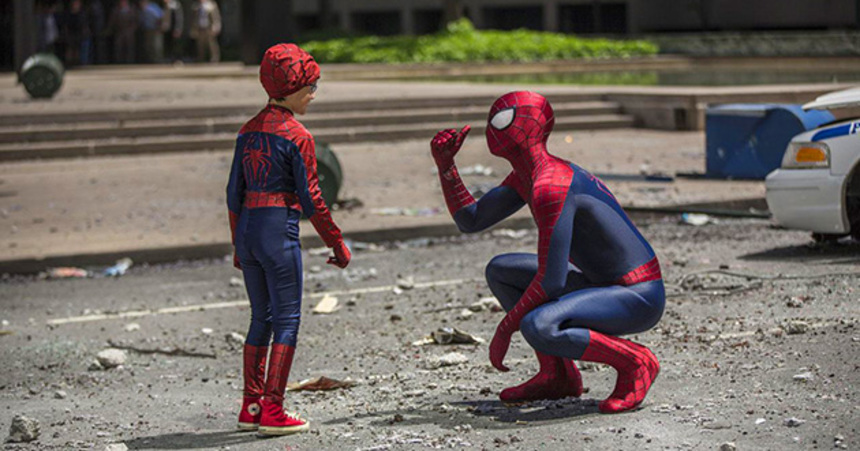 Do you remember that Seinfeld joke about how, with professional sports and their interchangeable rosters, we're never cheering for teams, but for clothes? So it is with The Amazing Spider-franchise. I don't know where the yardstick falls on these movies any more - of the five, only Spider-Man 3 seems like any kind of real achievement, though not likely of the sort the filmmakers intended - but I recall the hullabaloo surrounding the reveal of Andrew Garfield's new costume last year. "Much closer to the comic book!" As though that, in itself, were some stamp of adaptive fealty.

(Read Eric's review of The Amazing Spider-Man 2 here, and watch out for spoilers beyond this point.)

The Spidey-suit is certainly splendid this time around. On an introductory shot of Spider-man, in which he is (I assume) BASE-jumping from a passing 747 into midtown Manhattan, the fabric down his backside undulates like a silk scarf, as the scarlet superhero drops through space. The opening action sequence of ASM 2 is similarly dandy, because it's set in broad daylight, involves plutonium, and a features lot of police cars crashing into other police cars.

The Spider-man costume, bearing no visible similarity to any spider that I've ever heard of (bereft, even, of a spider-shaped hat!), is a primary-coloured collision of the senses that is designed for sequences exactly like this. Why so many of the movie's action sequences go on to take place at night, I have no idea - but here, his costume screaming red and blue in the middle of the day, and before the mechanics of the movie's "plot" even begin to labour forward, we are sure as hell watching Spider-Man.

Costumes form a weird kind of predestination paradox in the Spider-Man universe. Characters are partially rendered visual sketches, moving towards their identifiable comic book iconography. I don't know if Dane DeHaan is a particularly good Harry Osbourne, but it sort of doesn't matter; DeHaan, as the movie strenuously points out, has a perfect soon-to-become-Goblin face. It's triangular, with serpentine eyes and a boomerang-shaped leer which, tilted slightly downwards, looks like this.

When Harry doses himself with spider-venom in an attempt to become a super-person and justifiably freaks out, Hulk-like, on the floor of the lab, he doesn't even seem to take a second to consider what is happening to him, because to him - and certainly to us - the endpoint is already known. As soon as his skin is convulsing under the venom's effect, Harry's eyes lock onto his costume, a suit of green body armour towards which his visual destiny has been pulling him for the entire film.

It's a curious structural conceit that has lived in the comic book movie genre since the original Batman: this lurking promise of the comic book character as previously conceived. These characters' journeys in the films, then, are simply to connect the narrative and visual dots from their "normal" state as whatever reputable character actor is essaying the particular role, with the moment they become that thing we remember from the comic book that we've come to see. A trope has evolved around laying out the answer to "how does he get to be like that?", where "that" is already known.

I don't know what to make of Electro, who starts off life as something like Jamie Foxx (albeit Foxx crossed with Michelle Pfeiffer as pre-Catwoman Selina Kyle in Batman Returns) and gets zapped into supervillainy when he's changing a lightbulb one night.

There's an unintentional frisson to the character's transformation, at least. Max Dillon is an obsessive dweeb, but a well-meaning one. When newly-minted Electro stumbles into Times Square and starts accidentally Electro-ing everything, and Spider-man shows up to stop him, we get to watch the surrounding police force give the white guy (admittedly, a white guy in a red-and-blue body stocking) the benefit of the doubt, while opening fire almost immediately on the African-American (admittedly, an African-American with glowing blue skin) who, till then at least, wasn't doing anything wrong.

I guess the clothes only make the white man, and by Avi Arad's "No Miles Morales, no way" policy, they probably always will.

Electro doesn't really need clothes anyway, and how or why he conjures a neoprene super-suit later in the film is beyond me. Once captured, Electro realizes that he can beam himself into the power grid and rematerialize anywhere he wants, sort of like Doc Manhattan in Watchmen. Exactly like Doc Manhattan, actually, in that he is blue and glowing and godlike and fabulous. And yet, even in his first stumbling attempt at recorporealizing himself post-energy, he immediately thinks to include a pair of black bicycle shorts, almost as though he knows he's in a PG movie. Manhattan, for reasons of common sense if not his R-rating, let his big blue freak flag fly.

The most delightful villain in the film, ultimately, is the Rhino - who participates in that smashing first action sequence (in proto-Rhino state, in which he's just a super-pissed-off Russian man), and fails. He fails because he was not complete, as we realize when he steps back up to the plate in the film's final moments.

A man in a hat gives the Rhino a giant iron robo-body, which looks appropriately Rhino-tastic, and the true Rhino is born. The half-man is made whole, but there's something sad about the whole thing by now, too. What choices did Aleksei Sytsevich have? He was always the Rhino. And he couldn't even afford his own clothes.

And so it is when Gwen Stacy goes to her fate. She's always been a set of clothes, waiting for this franchise to fill them; she can bark to Peter about her choices and decisions until she's Electro-blue in the face, but they were never her choices to make. She was never here for anything besides filling those clothes, that set of constraints that sent Gwen to her death at the Goblin's hands 40 years ago, and from which she never (excepting the Ultimate universe) escaped.

Everything else about Gwen, and by extension this whole incarnation of the franchise - the virgin territory of adapting this character on screen for the first time; the unanticipated super-sparks between Emma Stone and Andrew Garfield that followed them clean out into the real world - were nonetheless merely biproducts of unswerving, pre-existing conditions.

Gwen's wearing the clothes, literally and figuratively, and could never have been anything else. Gwen, like the Spider-Man franchise, never knew how little the person inside the outfit mattered.

Do you feel this content is inappropriate or infringes upon your rights? Click here to report it, or see our DMCA policy.
Andrew GarfieldEmma StoneJamie FoxxSpider-ManThe Amazing Spider-Man