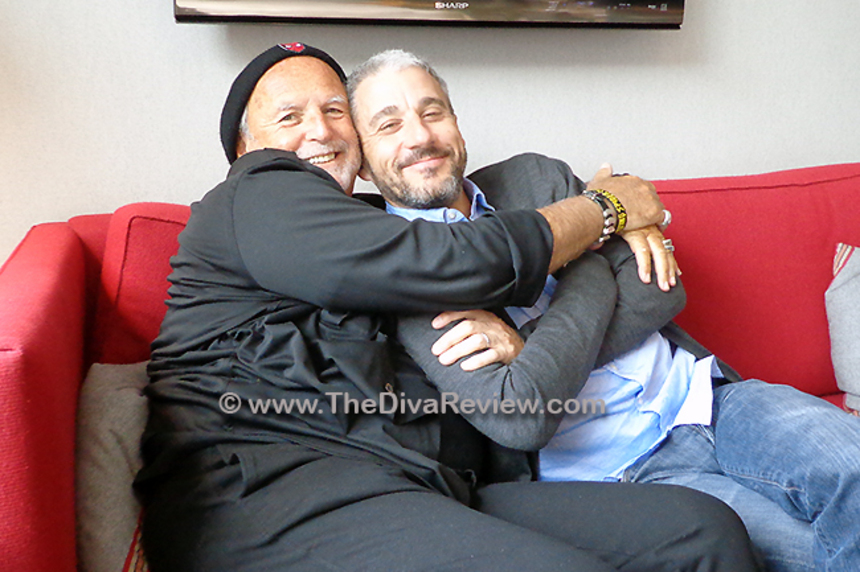 From a fan to the father of Marvel Studios; I sat down for a chat with legendary producer Avi Arad during New York press for The Amazing Spider-Man 2.  Mr. Arad and co-producer Matt Tolmach talked of future films, colour blind casting, sifting through the immense Marvel Universe and how much fan input influences them... even the death threats.

The Lady Miz Diva:  I recall some fans complaining there was too much drama in the last film and not enough action.  This film felt much more action-packed than the previous chapter.  Was the increase in action a natural storyline progression, or were you being attentive to the comments and reaction of the audience?

Matt Tolmach:  Both.  I mean, we are very attentive to what the audience says.  We knew it.  We needed to reboot the movie properly; we needed to tell the origin story.  That meant for a certain chunk of the movie he's not even Spider Man.  Then he becomes Spider Man, and he's wrestling with it, so you limit yourself when you do the math, as to how many huge set pieces you're going get to have.  In this movie, in the first 12 minutes, you've had two huge set pieces.  So, we had to get clear of the obligation to tell the origin story.  And we always listen to the audience to an extent...

Avi Arad:  Like with the costumes.  Let's put it this way, the costume that we had in movie one wasn't a unanimous decision.  Then the fans came in and said, 'We don't want this costume,' and we changed it.  And they came back on the Internet and they got the suit they wanted.

MT:  And they loved it.  The eyes, the colour, the belt, all of it, we listened.

AA:  We have to listen to them because it's like having one more in charge on the committee {Laughs}.  Like having another bunch of judges.

AA:  It's unruly, but it comes from passion.  Just like when I get death threats on the Internet, I know they're not going to physically kill me; it's the way they care about it.

MT:  But we also wanted to go bigger.  We wanted to make it funnier.  We really felt the need to kind of blow up the universe, so to speak, and to put Peter under much more pressure.  He starts the movie, he's in love with his job, not conflicted right now, he's good at it, he's great at it and he loves it.  That changes everything.  And so the Aleksei Sytsevich scene couldn't have happened in the last movie, it wouldn't have made sense.  But now you can match that character with a Spider Man who's equally flip.  We wanted to go there we wanted to make it bigger and sort of popcorn friendly.

AA:  We also wanted to pump up the action against an existing city versus having to go somewhere and build a city and try do the same thing.  There was a lot of freedom and comfort.

In this chapter, Andrew Garfield and Emma Stone really claim their roles as Peter Parker and Gwen Stacy. The audience feels for what this young couple is going through.

MT:  That's why it was so right for telling this story because they are both at the peak of their greatness.  They're both coming into their own.  We're saying he loves being Spider Man, but she's utterly her own convicted, empowered woman, and she's got a plan and she's following it.  She knows where she's going.  And so that the universe pulls the rug out from under that; it feels so wrong and therefore so right dramatically.

AA:  Harry {Osborn} was a very successful introduction.  I'll tell you, this Harry is the Harry we needed to introduce to Peter.  The other Harry {From the Sam Raimi films} was almost like too close; you couldn't tell the upstairs downstairs.  You couldn't tell the socio-economic differences with James {Franco}.  Here, it's like you look at the guy, and you see that the only thing they had in common is the fact that they came out of the same halls.

MT:   That they knew each other -- and they were both dumped.

There's such a huge Marvel universe; how do you choose what character to introduce at which point?  How do you decide that Electro or Green Goblin or Rhino is going to appear during any given film? Exactly how many more AMAZING SPIDER-MAN movies are you planning, two or one?

MT:  Sony announced a while ago that were going to have a Spider-Man 4 after we have Spider-Man 3.  What we are actively working on now is Sinister Six, Venom and Amazing Spider-Man 3.  Which may not sound like it, but that's a lot.  So we're cooking that and then we're going to keep going from there.  That's what we sort of set our sights on.

But to answer your question, each of the characters in the movies, those villains, serves a very specific purpose: Obviously, for the ending of the Peter/Gwen story there's a very specific person who fulfills that role.  That person is not Electro; but he does something else that we wanted to accomplish, which is to put the city in real jeopardy.  So we wanted to be bigger and as much as we loved Doc Connors {The Lizard in the 1st film}, not enough of that movie probably was spent putting the city in jeopardy and seeing that the people were becoming lizards and all that.  In this movie, we wanted to be clear that the stakes of this whole thing was the safety of the people in the city, the people of New York.  So you needed a villain that became about awesome power and that was Electro.  Aleksei was about fun; Aleksei was about. 'Who do we open this movie with without an origin who can just be funny and candy and we can use them whenever we want?'  That's a little bit of how you do it.

AA:  Aleksei also represents the future of this universe.  It's high-tech, hard to stop.  I mean, if all of them are going to go from where they were in the comics to these incredible high-tech villains, Spider Man's going to have it tough.  He'll have to be like in this movie with Electro; you have to become a genius scientist.  And in this movie, I know it seems small because there are just so many things you can yell out loud, but the fact that he and Emma {Gwen} - two science geeks - have to figure out how to stop the villain not with their fists, but with their minds, to me it was a great thing to finally see Peter come to that.

The colour blind casting of Marvel pictures is another thing I find so intriguing.  What is it that motivates you to think outside the lines in this regard?

AA:  It's time.  Marvel is over 50 years old and you probably don't know, but 50 years ago there were only white people in the world.

AA:  {Laughs} And you know what? It took a long time, it shouldn't have taken that long, but it doesn't matter, it's here.  It just doesn't matter.  You just find the best actor.

MT:  Who's the best actor that we can think of and the only person that we ever thought of to play Electro?  Jamie Foxx - best actor - end of conversation.  That's where we get off.  It's like, who's great and who represents this world?

AA:  If you're not going to start with some diversity, it's so against what Marvel stands for.  I mean, we need to do it.  It's the right thing to do and the talent out there is amazing.

MT:  It's also the world.  These movies are also reflective of the world we live in.  And we don't live in a world - thank God - with only white men in it, and so how silly would it be to make movies that way?  It's just wrong.

Mr. Tolmach, what have you learned from working as a producer beside the legendary Avi Arad?

I think you have a ways to go yet.

MT:  Clearly!  Above anything else is a deep love of the characters; and that you protect them like they're your own children.  And this is great literature, these are great characters, and you listen to the fans, but you listen to the characters.  And you love them with all that you have.  What he has... *Leans over to AA* ...You're not allowed to talk about yourself.

Avi has a crazy passion for the characters in this universe.  Frankly, this doesn't happen without him.  I was in the room in 1999, or whenever it was when we started on Spider Man, and if you look at a 1999 universe and a 2014 universe in terms of the movies, they look very, very different.  The primary difference is that man.  That's true.

AA:  That's what happens when you're colour blind.

MT:  That's true.  It's what happens when you're open to doing something that nobody else has done before.

AA:  That's probably the biggest challenge for me; it's true, every time we know we need to move forward, my first instinct is, '*sigh*, We're going to change what's in the books.'  Therefore having a partner like Matt, who I think can be a little more objective about it and just get comfort that it's the right thing to do, it's the right story to tell.  Because that was my Bible forever, so today it's really easy because I have a great support group.


This interview is cross-posted on my own site, The Diva Review.  Please enjoy additional content, including roundtable chats with stars Andrew Garfield, Emma Stone, Jamie Foxx, Dale DeHaan and director Marc Webb and exclusive photos from the New York City press day there.