Review: THE AMAZING SPIDER-MAN 2 Is A Serviceable Sequel 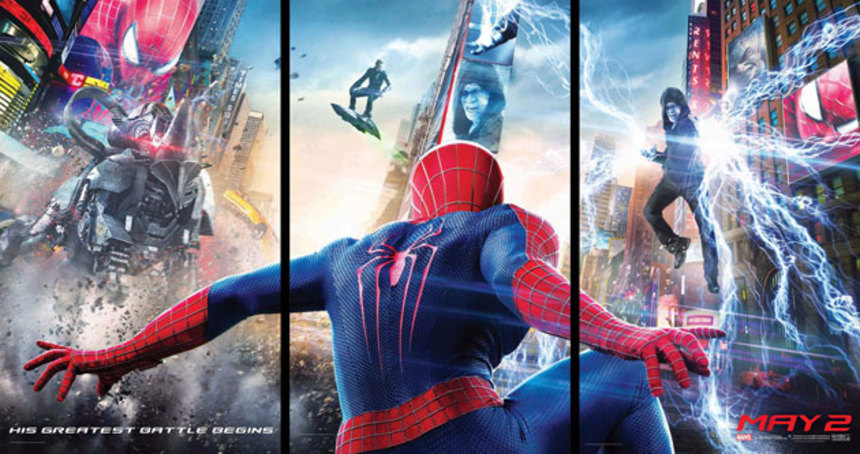 The sequel to the Spider-Man reboot sees Marc Webb returning to the director's chair and, ultimately, using the same tone and a very similar structure to that of the original, even though there are more subplots to deal with in this new installment.

Kicking off with a couple of sequences driven by action and intensity, the movie eventually takes time to develop some of the character conflicts that emerged in the first one, as well as to add other dilemmas related to Oscorp and the investigation once led by Peter Parker's deceased father, Richard.

The first movie made emphasis on the background of Peter's parents and, with a post-credits scene included, left a question unsolved: What's so dark about Richard's past that might hurt Peter? From its first second, The Amazing Spider-Man 2 lets the viewers know more about the disappearance of the parents and, little by little, gives Peter the role of detective in order to solve the mystery once and for all, in what is just one of the four main stories that are connected. Webb and the writers try to give each subplot an equal importance, but it is clear The Amazing Spider-Man 2 is all about one important event that marks the overall story for the protagonist; in other words, some of the secrets revealed here are not as impressive and relevant as they initially appear.

Another problem that came up at the end of the 2012 effort was regarding Peter's relationship with Gwen Stacy (Emma Stone). The sequel again rests many times entirely on Andrew Garfield and Stone's shoulders. There's good chemistry between them and, sure, there's a darker approach once Peter begins to literally see Gwen's dad -- a device that's a little clumsy -- and we remember the promise he is breaking, but in general terms, the silly/fun/love moments are kept. Talking about the humor, the situation is pretty simple: if you enjoyed the jokes of Spidey using a cell phone, then there's plenty of equivalent bits waiting for you. Spider-Man hasn't lost his taste for poking fun at his enemies, and Peter sometimes talks with a goofy British accent, so you get the idea.

Jamie Foxx and Dane DeHaan play villains, but prior to their transformation they share moments with both Garfield and Stone, acting as not-so-regular folks. Foxx is very enjoyable to watch as an over-the-top insecure Oscorp worker who loves Spider-Man, while DeHaan is much welcomed for the once James Franco-owned role of Harry Osborn; DeHaan looks more wicked from the beginning. Paul Giamatti also appears as the Russian criminal who eventually becomes the Rhino; however, this character functions just as a taste of what it might come in the future.

We actually see both Giamatti and Foxx during the second sequence of the movie, but only the character of the latter gets developed, though this story arc is really nothing special. Lacking surprises, the whole Electro (Foxx) thing relies heavily on the aesthetic, offering a couple of big action sequences. The main one has Electro leaving New York City with no energy. It tries to be tense -- two planes full of innocent people may crash into each other, for instance -- but, in the end, doesn't stand as an epic battle. On the other hand, Harry Osborn has a less straightforward story, with a more interesting conflict, but the look of the Goblin is, unlike Electro's, vastly disappointing.

The Amazing Spider-Man 2 closes an emotional chapter in the life of Peter Parker, but one that will forever haunt him. At the same time, it opens a new episode that promises even more villains and, consequently, a bigger spectacle; in a way, it "owes" that to the kiddies, you know, more Spidey action in exchange for the real-life struggles the characters had to deal with in this one.

Do you feel this content is inappropriate or infringes upon your rights? Click here to report it, or see our DMCA policy.
Andrew GarfieldEmma StoneJamie FoxxMarc WebbSpider ManThe Amazing Spider Man 2