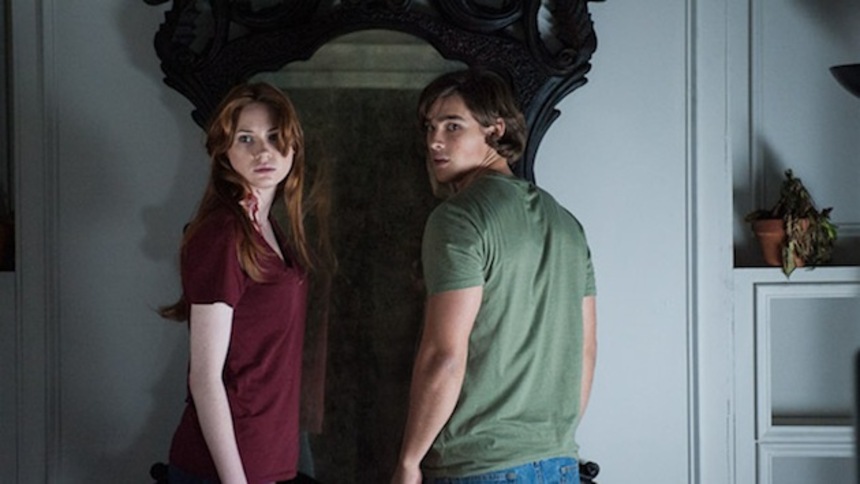 Of all the things remarkable about Oculus, and there are many, it's that this is a slow burn film with a deliciously creepy mood, yet at the same time it remains exhilarating throughout.

The fact that a "creepy mirror" film proved to be one of the highlights of last year's (or, frankly, any previous) Midnight Madness slate at the Toronto International Film Festival is a testament to one key fact: This isn't just a great Midnight Madness film, this is a great film, period.

(For those who may be unaware, the Midnight Madness slate usually has a few rules - keep things snappy, keep them gory, and you'll do well to keep the denizens of the dark with you for a running time that stretches well into the very early morning. Splatters of blood and blaring horns are often key, and often mood is sacrificed for needing to keep the audience jolted awake.)

I had promised I'd work in puns about a haunted mirror film proving to be "reflective and illuminating", and I'll stick by that. That said, the statements are apt - it's not often that we can have an inanimate object be the subject of as much dread, and when it's pulled off as effectively as this, it's time to celebrate.

I kind of love that director Mike Flanigan was born in Salem, Massachusetts, it makes his foray into genre filmmaking somewhat predetermined. It's also clear that he's watched his share of Kubrick films, even if he was outed during the Q&A that he prefers the book to the film of The Shining. Still, it's not an unfair or ridiculous comparison - the taut action, the floating camera work, and the sense of coolness that's pervasive in the film is similarly intoxicating.

Visually, the film is extremely strong; a rich palate and glossy yet moody photography is buttressed well against video footage, starting from the early hypnotic tracking shot following our red-headed lead walking through an auction house, her hair swinging to and fro like a pendulum. Like the mirror itself, the images and Michael Fimognari's cinematography suck us in, the camera moves deft, the compositions inviting.

Performance wise, the ensemble is uniformly excellent. Katee Sackhoff and Rory Cochrane may have the most recognizable faces, but the rest of the ensemble are more than up to tell this tale with a great deal of conviction.

The key themes of the film, the reflections and distortions caused by the mirror's influence, are shared by a complex yet always coherent editing schema. As we float between timelines, there's always a clear grounding, while still providing plenty of opportunities to legitimately freak out an audience. This is a wonderful mix of new and old school cinema, one eschewing the most egregious tricks of low budget horror such as shaky cam or the crutch of "found footage" in order to make up for dreary or incompetently captured imagery. This lack of taking the easy way out, the determination evident in every frame to capture the story with integrity rather than cheap manipulation or contrivance, is very much to be applauded.

Oculus proved to be one of the biggest surprises of the fest for me, a silly-sounding premise executed extraordinarily well. Treating the audience with intelligence, this extremely well made film is not only the one to beat, it's also a sure sign to come of an extremely talented filmmaker just at the beginning of what will hopefully prove to be an illustrious career.

Review originally published in somewhat different form during the Toronto International Film Festival in September 2013. The film opens wide in theatres across Canada and the U.S. on Friday, April 11.