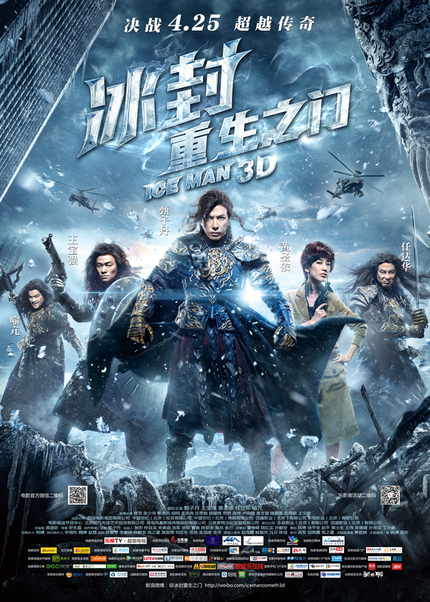 Production problems over the high cost budget and shooting complication has stalled Law Wing Cheong's period/modern actioner Iceman 3D for a long while but after overcoming this temporary setback, the remake to Clarence Fok's Iceman Cometh is finally ready to hit the theaters across Asia.  To promote this occasion, the latest trailer has arrived that provides more context on the narrative while showcasing Donnie Yen's exciting brand of action direction.

In the Ming Dynasty, there lives four orphans, Ying (Donnie Yen), Sao (Wang Baoqiang), Yuanlong (Simon Yam) and Niehu (Yu Kang). Raised in Taoyuan Village, the four are as closed as brothers. Their exceptional martial arts skills allows them to reach the highest rank within the imperial guards.

After the four successfully killed the Japanese troop leader, the Emperor orders Ying to escort the Golden Wheel of Time from Sindu (now India) back to the capital, which is said to have the power of time travel and foresee into the future.

From the correspondence between the Japanese and Ming officials seized from the mission, Mr. Tu, the Chief of National Defence, reveals that he can identify the traitor by the handwritings. On the way of escorting the Golden Wheel of Time in the snow, Ying is surprised to meet Sao, Yuanlong and Niehu. They inform Ying the news of the murder of Tu's family with Ying as the killer. The Emperor believes that Ying killed Tu in order to conceal his identity as traitor, so the Emperor orders the death of Ying and his clan as punishment. With the Trio sent out to catch Ying, a separate troop is sent to Taoyuan to kill the villagers. From the evidence presented to Ying, he comes to the conclusion that the traitor has to be one of the trio, and also the one behind the ruthless killing. Desperate to save the Taoyuan villagers, Ying chooses to fight his way out. The intensity of the duel has shaken the earth causing an avalanche that buries the four during the heat of battle.

Now in 2013, Squire Tang, funded by a mysterious financer, digs up three ancient icemen from the outskirt of China; they are Ying, Sao and Niehu. As he is transferring the icemen to Hong Kong for further studies, the vehicle involves in a traffic accident which, unexpectedly, defrosts Ying.

Frozen for 400 years arriving to modern day Hong Kong, by chance Ying meets an intoxicated May (Eva Huang) on Halloween evening, who later gives him shelter. With his intelligence and hard-work, Ying soon becomes more familiar with the idea of modern society with the help of the internet. While adapting to his new life, Ying and May also gradually starts to fall for each other.

Ying also never forgets about the injustice that frames him. He comes across a historical record on the internet stating that he plotted a revolt which branded him with the reputation of a traitor in history. However, there is no information regarding the fate of the villagers. For Ying to correct history, he must use the Golden Wheel of Time.

Sao and Niehu also reanimates at the present time. They continue the chase from the past into the present, eventually leads to a showdown on Tsing Ma Bridge. Yuanlong suddenly appears from a helicopter as a senior police officer. During the encounter, Ying gets shot and falls into the sea, where his outcome is uncertain...

The theatrical release date for the first of the two-parted epic in Hong Kong and China is on April 17th and April 25th, respectively.  You'll find both the Cantonese (English sub included) and Mandarin version of the trailer embedded below.