SXSW 2014 Review: STARRY EYES, A Surrealistic Trip Down The Boulevard of Broken Dreams 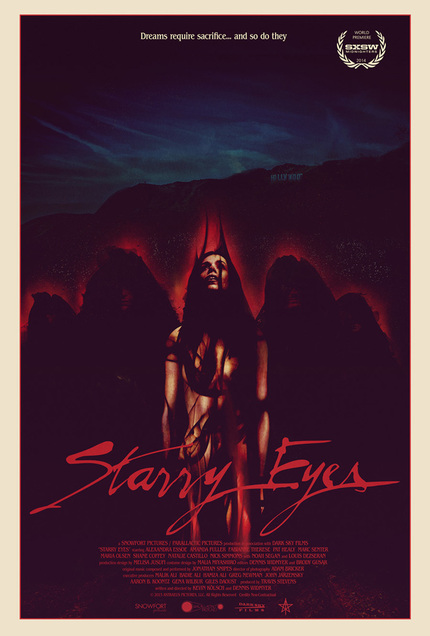 "Would you give me your body to be a vessel for my voice?," asks the nefarious casting director of the wide-eyed starlet Sarah Walker at the sort of audition parents, boyfriends, and general advocates of decency shudder at the thought.
Like so many actresses hustling to get noticed, Walker reluctantly agrees that yes, she would do anything, despite her accurate suspicion that something is rotten in Denmark. But when the seemingly innocent question finally reveals its exploitative intention, Walker maintains that she isn't that kind of girl. Unfortunately, what she is really communicating to the sleaze factory is that she isn't the kind of girl who lands roles due to a lack of dedication. It's a horribly manipulative situation that sadly exists outside the realm of horror films, but given the atrocity of the reality, it's a subject ripe for the horror genre.

Starry Eyes is a most welcome addition to the Hollywood nightmare genre that dates as far back as Sunset Boulevard (and earlier) and in more recent years includes all-time favorite Mulholland Drive. The genius of Starry Eyes is that it melds the abstract Lynchian nightmare with the body horror of Cronenberg as Walker abandons her integrity, literally morphing into the type of creature who will do and eventually does everything it takes to gain acceptance in the superficial world that champions image over talent.

The film is called The Silver Scream and the perverse "filmmakers" - an elderly band of cultists right out of Pascal Laugier's Martyrs - seem utterly disinterested in any actual acting. But Walker, possessed by ambition, is too pleased with her bragging rights of having landed a leading role to acknowledge the danger of identity loss. Once Walker accepts the role via any means necessary, Starry Eyes descends into a visually stunning, surrealistic nightmare down the boulevard of broken dreams, wherein success and personal sacrifice go hand-in-hand. The imagery is striking and aided immensely by a genre-fan musical score that evokes John Carpenter and a little Giorgio Moroder.

But stellar script, skilled cinematography, and clear direction aside, perhaps most striking of all is a fascinating, dedicated performance by newcomer Alexandra Essoe, who meets the thematic endeavor with bravado and undeniable chops. In the first act she approaches the naive character with empathetic truism before switching gears to a balls-out madcap portrayal worthy of Beatrice Dalle. Like Walker, there is nothing Essoe won't do to service the script. But unlike the film's protagonist, she is in complete control of her craft.
As a result, and perhaps specifically because of her command, Starry Eyes plays with shocking effectiveness that doesn't let up until the film's resonate final frame. A talent is indeed born out of this platform and I can only hope that as many upcoming actresses as possible bear witness to this work, as there is much to learn from Essoe's performance and even more from this cautionary tale that admirably insists there is more to acting than achieving a little attention.
Sign-In to Vote
Tweet 0 Submit