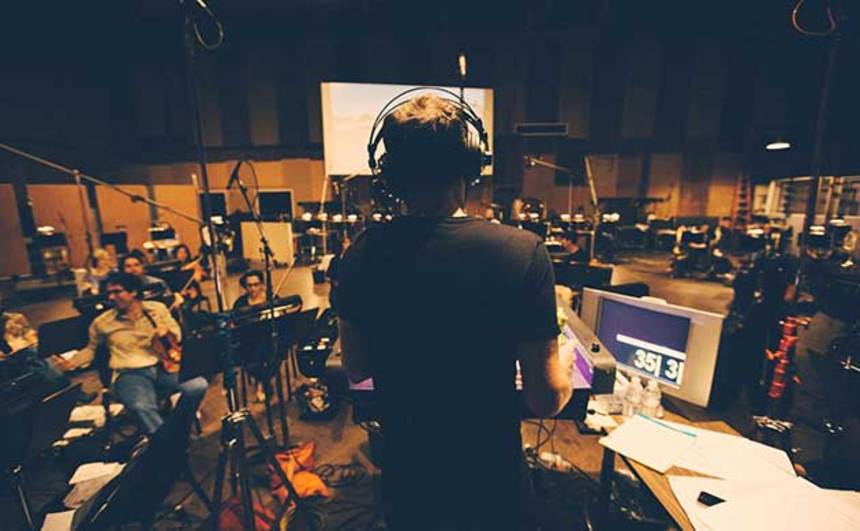 Spoiler warning: This interview discusses specific scenes from The Raid 2.

Pay attention to the score in The Raid 2: composer Joe Trapanese's work here provides so many moments that inform (or at least help us get a shorthand understanding of) its large cast of killers, criminals, and other underworld type crowding director Gareth Evans' martial arts sequel.

You've heard some of his work: Trapanese has served as the composer for the animated TRON: Uprising and Oblivion with director Joseph Kosinski, and he's worked on everything from Fast 5 to TV's Dexter.

Trapanese's work in The Raid 2 - largely a mix of electronic and symphonic elements - serves the film in a way that is coherent, yet allows each scene to breathe on its own.

During a recent L.A. junket for the film, Trapanese and I spoke about his work on The Raid 2, the collaborative process, dealing with the extra running time, and why you didn't hear any traditional Indonesian music in the first film.

"There are a number of things an action film composer needs to be aware of," Trapanese says when I ask him about trying to find the right balance between making something people can follow without competing with the action onscreen. "One of them is where music goes, and one of them is sound design: understanding what kind of sound effects you're dealing with and what the director's vision is."

Trapanese explained that for his own process, he likes to get the sound design elements out of the way first. "You know, on something like Oblivion, we worked very closely with the Skywalker team trying to understand what the Bubblejet was going to sound like. So when we're writing music for those sequences, we know what kind of frequency ranges we could work in."

He adds that, more importantly, a composer needs to understand in the mind of the director, which moments are musical moments and which are sound design moments. Trapanese explains how this delicate balance lead to one of his favorite sequences he's worked on professionally.

"I think a great example of that is the car chase sequence in The Raid 2. A majority of it is without music. And that was a very conscious decision, because leading into it, including the first bit of the car chase, we have a long musical build-up. And because of the power of that scene and the power of what Skywalker sound did with the engine and the cars, we wanted to feature the raw power of the cars - the power, the brutality."

Whereas The Raid was a compact 90 minutes of non-stop action, at 150 minutes The Raid 2 offered Trapanese a chance to expand on some of thematic concepts and textures from the first film, something the composer says was one of the most exciting opportunities when coming into the sequel.

"One of the things about The Raid is that it had these kind of set-piece moments in the first or second reel - I can't remember. The boy gets shot, the bullet comes through the door, and [there were] these musical kind of set-pieces where you could use a tone or some sort of cool part of the texture."

Trapanese says that he's never worked on a film where the score was added, he could sit down and watch it with the filmmaker, and all of the work would be done. Discussions about placement or even omitting parts that might sound great, but for whatever reason dominate the scene.

In the case of The Raid 2, everything from the score to the Foley work was being developed up until the very last minute. "Every film I've worked on, there's been a constant collaborative exploration of 'What is the film.' We're always trying to make things better, all the way to the end."

Trapanese went on to explain how he was able to build something similar into one of the major setpieces of the sequel: a bloody, prison mud fight where Rama must protect Arifin Putra's character Uco. "We did this kind of Ennio Morricone, spaghetti-Western type of showdown music. It sounds like harmonicas, but it's not - it's electronic."

It's fascinating to listen to a composer explain their process like this - how elements carry over between scenes and characters, or get juxtaposed as needed. For instance, Trapanese explained that he developed a theme for limping, upstart gangster Bejo (Alex Abbad), which then morphed into the cross-cutting action when he's hired killers Baseball Bat Man and Hammer Girl go to work on a rival gang late in the film.

"When we see Bejo, a lot of times I'd use this whacky bass sample that I had. There's this bass that has multiple strings on it that resonates when - it almost sounds like a cross between a double bass and a sitar. So just playing a couple of notes on that, that became his sound."

Trapanese says that he wanted the audience to feel Bejo's theme subconsciously (and therefore the character's presence) in the wild, percussive Baseball/Hammer fights. And that subconscious impact was also abetted by his work with The Raid 2 sound team who developed a tone which would play in scenes set in Bejo's restaurant.

Smiling, Trapanese joked, "I wonder if people will notice, but that goes away when Bejo goes away."

The Hammer/Bat sequence also serves as our first introduction to Cecep Arif Rahman's character, the Assassin, who has his own theme rooted in traditional Indonesian music - something director Gareth Evans consciously tried to avoid in order to create an experience that was accessible to a global audience.

"We wanted people to relate to this film in a deeper way than just, 'Oh, I'm watching a martial arts film from Asia!'"

"On the first film, Mike Shinoda and I, all together with Gareth, decided we're not going to use indigenous percussion instruments from Indonesia. We're not going to use gamelans [a set of traditional instruments from the region] and those kind of drums to give it this kind of 'ethnic' flavor. We wanted to avoid that, we wanted to make something classic and universal." He continues, "I think it would really kind of detract from the picture if we just started doing pentatonic scales and Asian stuff, you know? That would almost be talking down to people, like 'Yes, this is set in Asia!'"

However, thanks to the Assassin character, The Raid 2 offered a thematic reason for including indigenous music.

"The way he uses Silat is a very old-school style of Silat. Very classic and it's so amazing to watch this final fight between him and Rama which is kind of about what Silat is." Again, Trapanse was going for thematically appropriate, including hammer sounds for Hammer Girl's scenes and baseball sounds during Baseball Bat Man's fights.

When focusing on Rama, the film's lead, Trapanese says that for Evans it was important that they tell the story of Rama as a human being - something underlined early on in a clandestine call between Uwais' character and his wife. In the scene, Rama - having infiltrated gang boss Bangun's (Tio Pakusodewo) organization - user the cover of loud music for a moment to call his wife who he hasn't spoken to in two years.

When I ask him about the diversity in his compositions - The Raid 2 sounds nothing like Dexter, and TRON and Oblivion, both chilly sci-fi properties which nevertheless have their own distinct textures - Trapanese says that he attempts diversity from project to project, conjuring up distinct sounds where possible.

"I think it's just kind of a manifestation of my background as an artist. I have this odd duality and fluency in computers, electronics, and synthesizers. I've been playing with synthesizers since I was in middle school. But at the same time, I was a band geek and studying composition and went to a music conservatory and learned orchestration."

For Trapanese, movie scores typically use orchestration to give a sense of the size and scope of a scene, but electronics and sound design bring in a range of techniques and technology to modify the feel of the scene. "I've been very lucky to have this diverse tool box where in some way I'm relevant."

The Raid 2: Berendal is now playing in select theaters in New York and Los Angeles. It expands wide across the U.S. on Friday, April 11.

Do you feel this content is inappropriate or infringes upon your rights? Click here to report it, or see our DMCA policy.
Gareth EvansJoseph TrapaneseMusicThe Raid 2: Berendal