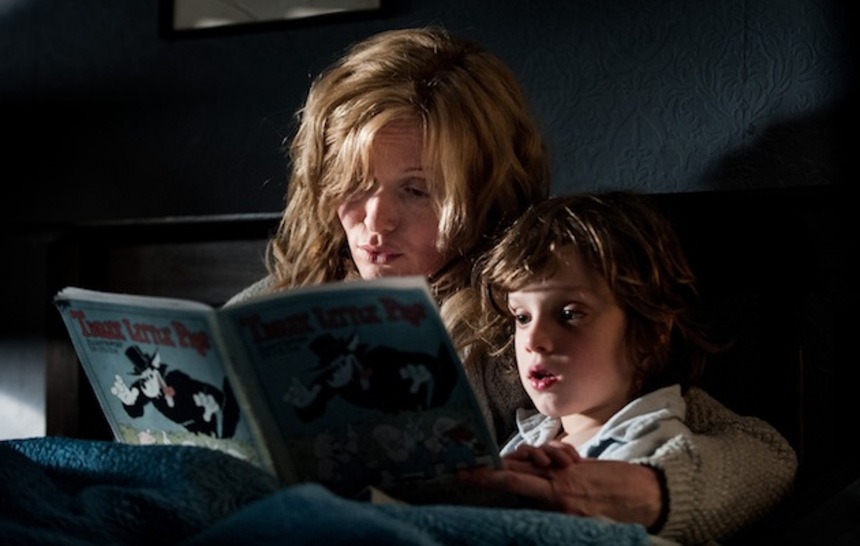 No doubt a high point for many of us ScreenAnarchistss at Sundance, Jennifer Kent's storybook monster turned real monster tale The Babadook also caught on with much of the Park City audience. Which means it was only going to be a very, very short matter of time before the film got distribution. And so it is that IFC Midnight has picked up Kent's debut for the U.S. and Latin America. No word on when the film will hit screens big and small, but let's just assume it'll be later this year.

In the meantime, check out Todd's favorable review right here.

PARK CITY, UTAH (January 25, 2014) - IFC Midnight announced today from the 2014 Sundance Film Festival that the company is acquiring U.S. and Latin American rights to Jennifer Kent's psychological horror film THE BABADOOK. The film, with a screenplay by Kent, stars actress Essie Davis in a breakout role as a single mother who must cope with her troubled son and the shadowy monster that has taken over their home.  The film was produced by Kristina Ceyton (Causeway Films) and Kristian Moliere, and executive produced by Jonathan Page, Michael Tear, Jan Chapman, and Jeff Harrison.  The film made its World Premiere this week in the Midnight Section at the 2014 Sundance Film Festival.  Entertainment One Films International (eOne) handles international rights to the film.

Jennifer Kent 's remarkable debut feature tells the story of a single mother named Amelia (Australian actress Essie Davis in a critically hailed breakthrough performance).  She is plagued by the violent death of her husband, and forced to battle with her troubled son's nighttime fear of a shadowy monster.  At odds with her own child and this terrifying presence in her home, she is forced to confront this dark entity lurking in her house. With echoes of past and contemporary classics like Rosemary's Baby, The Tenant, The Exorcist, The Omen and Let the Right One In, the film is an exquisitely crafted tale starring Davis and young newcomer Noah Wiseman. The supporting cast includes Daniel Henshall, Hayley McElhinney, Barbara West, and Ben Winspear.

Jonathan Sehring, President of Sundance Selects/IFC Films, said: "This is an extraordinary debut feature from a brilliant Australian filmmaker named Jennifer Kent who has crafted the perfect classic horror film.  We were blown away by the two lead performances in the film, and we believe that people will see this film and realize that Jennifer Kent has arrived as one of the great new horror filmmakers."

The film made its mark terrifying audiences and critics alike at the festival. Josh Rothkopf at Time Out NY @joshrothkopf tweeted: "Writing about THE BABADOOK (★★★★★): hugely pleasurable. Thinking about it at 3am in a strange condo: not so much."  Noel Murray at The Dissolve wrote: "Simply put: This movie is absolutely terrifying, from its guttural croaks ("baaa baaa dook dook dooooook...") to the creepy design of The Babadook itself," and via @Noelmu tweeted: "Recommendation/warning: You can't get rid of THE BABADOOK. #Sundance." Anthony Breznican at Entertainment Weekly @Breznican tweeted: "Pulling the covers up extra tight tonight, thanks to @TheBabadook #Sundance midnight movie." Brian Tallerico at Roger Ebert.com @Brian_Tallerico tweeted: "THE BABADOOK: Nothing is scarier than parenthood. Echoes of The Orphanage & The Shining herald a major new talent. William Goss at Film.com @williambgoss tweeted: "The Babadook: yeah, that might be the creepiest goddamn thing in ages. #Sundance," and Sam Adams at The Philadelphia Inquirer @SamuelAAdams tweeted: "If you weren't in Park City's Egyptian Theatre last night, you missed #Sundance2014's first flat-out masterpiece."

"Sundance audiences and U.S. critics have thrilled to The Babadook's chills. It's fantastic that IFC Midnight has done the same, and that this impressive debut feature will find a home with wider American audiences," said Screen Australia's Head of Marketing Kathleen Drumm.  Screen Australia, the chief funding body for the Australian screen production industry, is a major investor in the film and supported its promotional efforts in Sundance.