Review: THE BABADOOK Plays Havoc With The Ideals Of Family Life 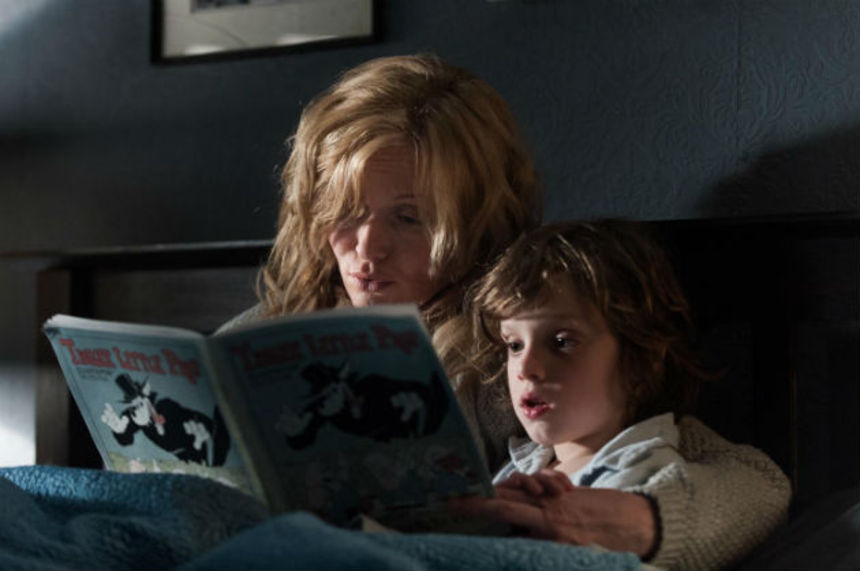 Australian writer-director Jennifer Kent makes a promising debut with The Babadook, a dramatic horror film that plays havoc with the ideals of family life and the love of a mother for her child.

Amelia has not had it easy. Once happily married, she lost her husband in a vehicle accident nearly seven years ago. Worse, the accident occurred while he was driving her to the hospital to give birth to their son, Samuel. And so what should have been one of the happiest days of Amelia's life became one of the worst, her child becoming a living reminder of what she has lost. It's a scenario that has clearly taken a toll on the weary woman and Samuel has not been immune to its effects, either, the charismatic child consumed by fears that monsters or some other unseen forces may come to take him or his mother away as casually and randomly as his father was taken.

Amelia is trying her best, she is certainly doing that, but the years have worn her down. And the years aren't helped by Samuel's impending birthday standing as a constant reminder of her dead husband. Nor are they helped by the rapidly escalating intensity of his regular nightmares, a seemingly daily occurrence that keeps Amelia herself awake all night to tend to her son. The house is on edge to be sure, and both Amelia and Samuel are at risk of tipping over the edge thanks to the arrival of a mysterious new book.

Titled Mr. Babadook, it seems to have appeared on Samuel's shelf of its own accord. And when chosen at random for bedtime reading ... well, the ghastly images and promises of a soon-arriving monster that would make the pair wish they were dead send Samuel into a frenzy. And soon the events that the book promises begin to play out. And as what first appears to be childhood imagination run wild begins to take on supernatural overtones, both are very clearly at risk of a horrible end.

Though it doesn't quite stick the landing, The Babadook presents an intriguing new talent in Jennifer Kent. The Aussie helmer has an obvious gift for staging and atmosphere, expertly building tension in a string of effective set pieces taking common childhood fears and pushing them out to extremes that remind that maybe we're not so grown up and mature after all. Maybe deep down inside we really still are afraid of what may be under the bed. And, more importantly, Kent proves herself to be a creator who understands the importance that this technical ability be employed in service of believable, grounded characters to reach maximum effect. Though she can play the bump-and-jump game with obvious ease, Kent has set her sights much higher.

There are some first-time jitters on display in the form of the occasional wobbly transition, a moment or two when less may have been slightly more, and a not entirely clear resolution -- while we do come to understand that The Babadook actually is Amelia's confrontation with it, the results of that confrontation, and why those results play out as they do, is significantly less clear as there have never really been any rules established -- but there is significantly more to like here than there are loose threads to pick at. Kent's is a challenging and complex voice and it will be very interesting to see what direction she goes in next.

Review originally published during the Sundance Film Festival in January 2014. The film opens in select theaters on Friday, November 28, and will also be available to watch via various Video On Demand platforms. Visit the official Facebook page for more information.