Why THE WOLF OF WALL STREET Is A Horror Movie 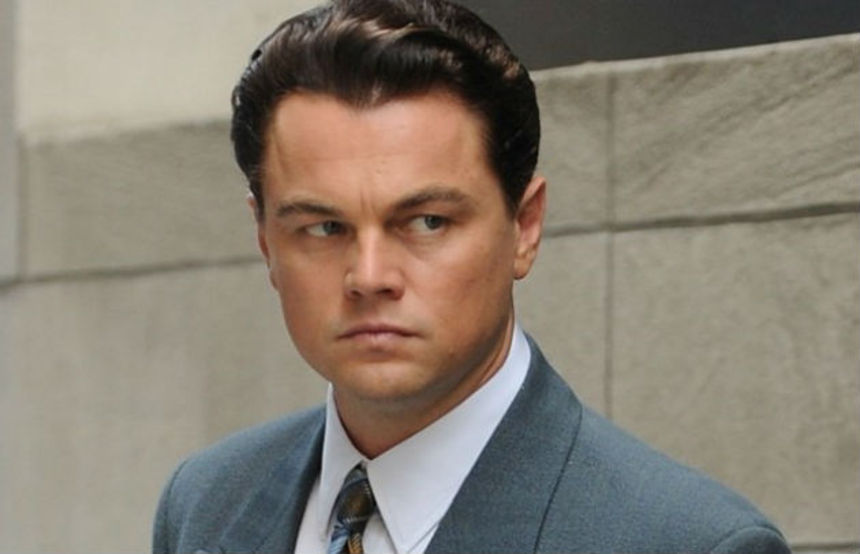 Martin Scorsese is a master of horror, whether he realizes it or not. Of course, if one simply adds up the piles of dead bodies from his violent gangster films like Goodfellas, Casino, Gangs of New York, and The Departed, one would expect to have a count that could easily be equal to any small-scale massacre.

The real terror to this writer is that of humanity's intentions, and Scorsese often opts to delve into the horrors of humans doing ghastly things to each other in the name of status, money, and power. Strangely, his latest film is likely the funniest movie you'll ever see about greed, and it might remain that unless you peer beyond the superficial veneer of excess and avarice.

The Wolf of Wall Street begins in 1987, when legendary white-collar criminal Jordan Belfort was just beginning his career as a stockbroker. We start out with one of Matthew McConaughey's latest trademarks -- mental, aggressive characters, who are arguably more interesting than any of the stoned beach bum or hero types for which he was once known. Here, he teaches the young Belfort how to take total advantage of clients -- the shocker is that we see it unabashedly admitted. He's a total sociopath addicted to sex, booze, and drugs, the very first of many addicts in this film, and this display foreshadows Belfort's future madness.

One might even say that because of the setting and the gluttony for wealth and rank on display, that Wolf is American Psycho remade with an entire army of Patrick Batemans on display, without the homicidal tendencies. Let us never forget how many sociopathic/psychopathic killers roam the horror genre, be they supernatural monster humanoids like Freddy or Jason, or your run-of-the-mill giallo slasher. 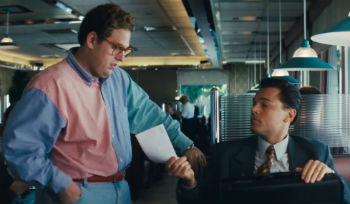 The next character we come across is Donnie Azoff, based on Belfort's right-hand sleaze ball, Danny Porush (Jonah Hill). In the film, Azoff saddles up to Belfort at a diner and tells him that they live in the same building. If that isn't weird enough, Azoff continues, vocalizing his lust for Belfort's car. With glazed over, blackened eyes ("like a doll's eyes") the dullard asks inappropriate questions like "how much did you make last month?"

Instead of kicking his ass, Belfort answers honestly. Hill's character then oogles Belfort like he's a naked hooker (plenty of those to come) or a killer selecting his prey, and does everything but drool when given the answer: $72,000. I haven't read the real Belfort's autobiographies, but the character Belfort strangely accepts the incredibly creepy Azoff's offer of servitude if he can pony up a pay stub. Also in the first few sentences to come out of Azoff's mouth, he confesses to having an ugly wife. Incredulously, Belfort also lets this stalker-esque guy take him into a tiny room to SMOKE CRACK. Rob Ford would be proud, but it's insane.

Anyone who's seen Requiem for a Dream, Jacob's Ladder, or Dead Ringers can attest to how frightening movie depictions of being under chemical influence can be. Later, when Belfort asks Azoff if the rumor that he married his first cousin are true -- it recalls inbred horrors like The X-Files "Home" episode and films like The Hills Have Eyes -- he admits that he couldn't let anyone else sleep with her AND that if they were to have a retarded child, he would "drive north and let it loose in the woods."

Just let that sink in a little.

Next, Belfort is training his old townie friends on how to trade and dump penny stocks and essentially steal from people, because he justifies that, "I know how to spend money better." He eventually turns his company into a cult of obsessed followers who will do anything for him. Leonardo DiCaprio playing Belfort is mesmerizing. He truly becomes a manipulative messiah of money, a charismatic cult-ivator of cash, who uses promises of wealth as well as threats of poverty and verbal abuse to motivate his clan of worshipping lemmings. Not quite like Jim Jones and his Jonestown Massacre, but not unlike the cult leader/maniac. In Belfort's church, the spirit of malevolence is alive and well on Wall Street. "Buy or die," he says upon his pulpit. 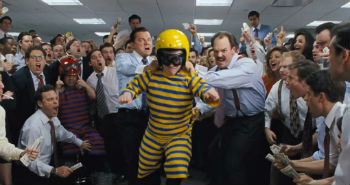 Known for off-the-wall work parties that involve sex, drugs, booze, bare-knuckle fighting, and dwarf tossing (and yes, we see all of this on screen), there's a scene in which he offers one of his female employees a hefty sum to have her head shaved right then and there. She accepts the money, simultaneously horrified and thrilled (verging on Marilyn Burns' screaming laughter at escaping slaughter in Texas Chainsaw Massacre) at her financial windfall, and ends up looking like a glammed up Chop Top from Texas Chainsaw Massacre 2. But hey, it's okay--Belfort announces that she'll promise to use her new funds to get DD implants! (Apparently a C cup is not sufficient for this version of Babylon.)

In addition to the happy hookers that Belfort and his brokers buy and use for part of the entertainment at his weekly parties -- the dwarves who rent themselves out for throwing at huge velcro dart boards, human bowling, and the like -- are referred to as "it" and compared to animals. In the boardroom over negotiations over the dwarf rental, it's declared that you "never look one in the eyes," and that "we need a tranquilizer gun ready" in case the dwarves charge like wild animals on the Serengeti. And then there comes the completely unexpected "one of us, one of us, gooba gabba, gooba gabba, one of us" chant from Todd Brown's 1932 masterpiece, Freaks, complete with pounding and chanting on the boardroom table. Amazing.

Later on, there's a Perfect Storm-like sequence in which an avaricious Belfort forces his yacht's captain to sail to Monaco (in order to reclaim hidden, illegal tax haven funds) in what turns out to be a terrifying storm that sinks his the boat and nearly kills him, his second wife, and Azoff and his wife-cousin. Inspired by the actual sinking of Belfort's yacht off the coast of Sardinia, it's astonishing that anyone survived at all, as if they do it just to spite the rest of humanity. 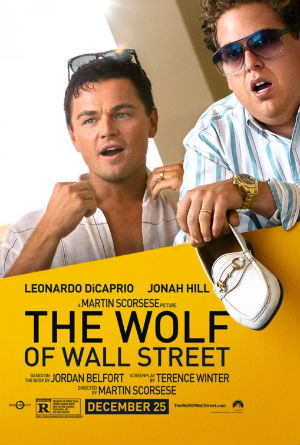 At this point, Belfort is a full-fledged addict who refuses to "die sober." The drug use, as repugnant as it becomes, leads to a full-on, chemical-fueled, Dr. Jeckyll and Mr. Hyde meets Gilbert Grape scene once the Belfort character's ingested too many expired contraband Quaaludes and develops a drug-induced cerebral palsy after driving his Lamborghini to the local country club and back home. It's a horrifyingly hilarious Popeye and spinach-inspired scene that truly must be seen to be believed. Cocaine is Belfort's spinach, and after he tries to kill Azoff, he's there to save the day.

Overall, the film is incredibly misogynistic, but how could one expect anything more from a troupe of entitled, money- and status-obsessed jerks? In addition to the pathological lying and copious cheating, you'll see wife slapping and punching when his second wife Naomi has decided she's had enough and wants to take the kids and leave in a harrowing scene highlighting domestic abuse. This is an issue across socio-economic lines that plagues families the world over. Cinematically, who could forget the beleaguered Wendy Torrance trying to escape from a possessed Jack with Danny in The Shining? Or a TV movie that would never air if it were made today -- The Burning Bed?

DiCaprio is slowly filling Jack Nicholson's crazy shoes in terms of recklessness and brilliance in acting and role choice; he's absolutely superb here. And in a lesser director's hands, this film would likely be a B-movie at best, given its salacious origin and content. Scorsese makes this train wreck one of the most entertaining films in history.

However, the most incredible feat Scorsese pulled off was crafting a film that truly transcends genre. The Wolf of Wall Street is "boys will be boys" all the way -- glutted with sensuous flesh and luxury goods, and hysterically funny at times -- until the plot sways towards toward the dramatic and leads toward the implosion of the American Dream. It eventually becomes frightening as hell, as the best horror movies always are.

The Wolf of Wall Street is now playing in theaters across North America.

Do you feel this content is inappropriate or infringes upon your rights? Click here to report it, or see our DMCA policy.
horror movieLeonardo DiCaprioMartin Scorsese