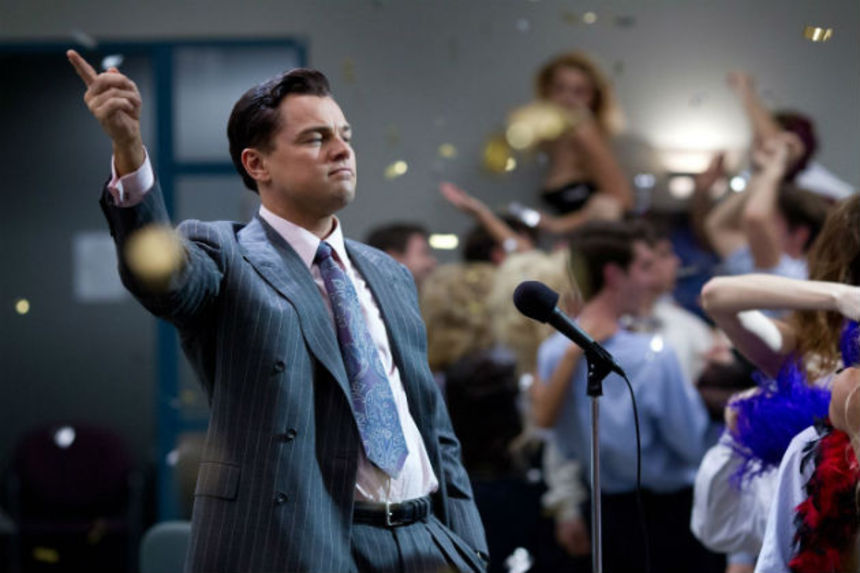 Tapping into a primal force that is mercifully unbound by decorum or good taste, Martin Scorsese and Leonardo DiCaprio tear up New York's financial district in their latest collaboration.

The Wolf of Wall Street finds both director and actor baying at the moon, streaking naked for all to see their shortcomings and strengths, flexing their muscles and refusing to cower at the prospect of an unconventional narrative and an unrepentantly avaricious protagonist. Inspired by a real-life criminal, Jordan Belfort is a consummate salesperson.

But he is also a particularly odious personality, a vile excuse for a human being who, early in his career as a stockbroker, developed a thickly-calloused disregard for his clients' financial fortunes; as long he profited, all bets were off. His thirst for wealth was not quenched with basic commission fees, and soon enough he devised schemes to rip off more money from more investors at a dizzying rate, quickly totaling into the tens of millions of dollars in ill-gotten gains.

DiCaprio is, frankly, too old to play a naive, fresh-out-of-college kid whose first day as a licensed stockbroker on Wall Street coincides with the nosedive that the stock market took in October 1987. Yet he gives a good suggestion of youth and inexperience, a prototypical sponge, eager to soak in the dynamic, profanity-laden, greed-obsessed, misogynistic culture that quickly envelops him. Even as a young person, his ability to deliver a compelling sales pitch over the telephone sets him apart, his self-confidence cancelling out his insincerity. 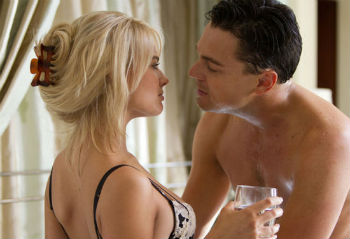 Focusing intently on the almighty dollar, Belfort steps easily into drug addiction, which then enables his obsessive personality to indulge freely in all manner of debauchery and sexual promiscuity, no matter that he is married with children. As his lifestyle becomes more luxurious, his sexual activity remains anonymous; he can only relate to women as naked vessels on which to line up cocaine or upon which to empty his seed. He drifts from one wife to the next as though he were trading in a lightly-used sports car for a brand-new model.

Committing fully to the idea of Belfort as someone who is not hindered by the mores of ordinary mortals allows DiCaprio to bellow and beseech and shout and scream and otherwise "overact" in a manner that would be inappropriate for any type of character that is not so over-sized and exaggerated. Largely presented from Belfort's point of view, The Wolf of Wall Street begins with his voice-over narration, breaks the fourth wall as he addresses the camera directly, and then employs the device only when needed to shore up the ostensible story.

Even as DiCaprio breaks the rules as a leading man, engendering little sympathy for his character's transgressions, Scorsese breaks all kinds of narrative rules, often drifting away from anything resembling a plot, while calling less attention to his directorial hand. Indeed, much of the whirling action feels tailor-made for his stylish flourishes, so that his craftmanship makes it impossible to see any seams.

None of this, however, even begins to suggest the heights of hilarity that are reached. (I cannot recall any Scorsese movie making me laugh out loud as often as this one does.) Nor does it touch on the prodigious amount of nudity that is shown and the numerous acts of sexuality that are portrayed. (I should note that most of those scenes are brief and the views fleeting.)

Yet the ridiculous, mirth-inducing conduct and the extreme sex, drugs, and rock 'n' roll all serve a purpose: Jordan Belfort and his cohorts lived in a world that was apart from and existed in isolation from the rest of humanity. They were rich, and, as Belfort brags at one point, he knew how to use the money. 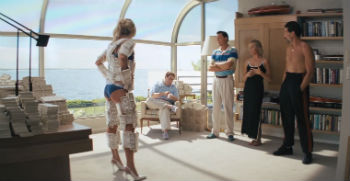 Aiding and abetting Scorsese and DiCaprio is a fine cast that exceeds expectations, most notably Jonah Hill as Belfort's partner-in-crime, Donnie Azoff, who lives only to 'get effed up.' Margot Robbie makes a solid impression as a beautiful woman who gets mixed up with Belfort; Rob Reiner is great fun as Belfort's anxious father; Matthew McConaughey sets the tone as an early mentor; Kyle Chandler supplies grounded balance as a straight-arrow FBI agent; and on and on: Jake Hoffman, Jon Bernthal, Jean Dujardin, and Joanna Lumley all make key contributions.

Behind the scenes, Terence Winter wrestled Belfort's book into a screenplay that may only have been a blueprint, but it's a wonderful blueprint, with a foundation that gives Scorsese license to riff into the eternal. Rodrigo Prieto's cinematography and Bob Shaw's production design are spot-on, while Howard Shore's * the musical score often plays second fiddle to Scorsese's usual, excellent mix-tape of pop, rock, and punk songs. (It seemed that more cover versions were used this time around, which may reflect in a small way that Belfort re-used tried and true sales techniques.)

Scorsese's most important collaborator is Thelma Schoonmaker, who has been editing his films since, oh, almost forever. So the rhythms, including the stops and the starts and the silences in which sound drops out at certain moments that makes the scenes mesmerizing, and then music kicks in to accent or undermine what's happening, are familiar and yet different each time out.

The Wolf of Wall Street made my sweet spot explode. It's a smart, explosive, and very, very funny movie, with an acute understanding of the peculiarities of greed and its corrosive effect upon the soul.

* Updated: Howard Shore is not credited in the film. We regret the error.

The film opens in wide release in theaters across North America on Wednesday, December 25. Check local listings for locations and showtimes.

Do you feel this content is inappropriate or infringes upon your rights? Click here to report it, or see our DMCA policy.
Jonah HillJordan BelfortLeonardo DiCaprioMartin ScorseseMatthew McConaugheyTerence Winter