The excitement is palpable around these parts with today's announcement that The Raid 2 will be done in time to premiere at this year's Sundance Film Festival. The follow-up to the best action film in decades promises a more fleshed out look into the incredible world that Gareth Evans gave us a glimpse of when The Raid first premiered at TIFF only 27 short months ago. It's time to dive back in and if the teaser is any indication, we are in for a wild ride.

But that wasn't the only announcement out of Park City today (though you'd be excused for thinking so). Following up on the Midnighters/Spotlight/New Frontiers and Competitions/Next announcements last week, the Premieres and Documentary Premieres were fully revealed today. Other exciting films on tap include Michael Winterbottom's reteaming with Coogan and Brydon in The Trip to Italy, David Cross's feature directorial debut Hits, Mike Cahill's Another Earth follow-up I Origins (also with Brit Marling), the latest from Lynn Shelton Laggies, a big cast John le Carré adaptation by Anton Corbijn called A Most Wanted Man, and new films from William H. Macy, Gregg Araki, John Michael McDonagh, and David Wain. Whew! 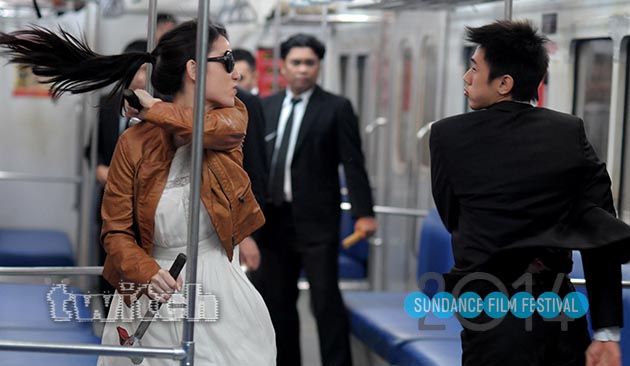 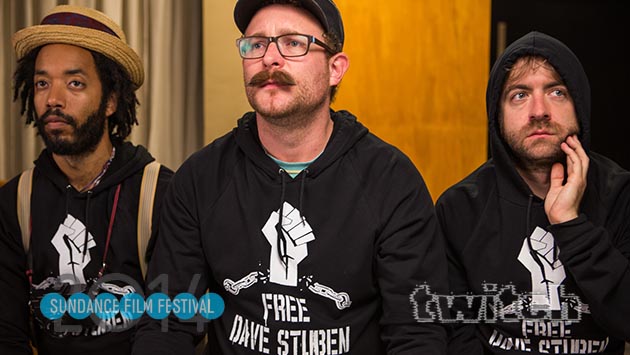 Calvary / Ireland, United Kingdom (Director and screenwriter: John Michael McDonagh) — Calvary is a blackly comedic drama about a priest tormented by his community. Father James is a good man intent on making the world a better place. When his life is threatened one day during confession, he finds he has to battle the dark forces closing in around him. Cast: Brendan Gleeson, Chris O'Dowd, Kelly Reilly, Aidan Gillen, Dylan Moran, Marie-Josée Croz.

Frank / Ireland, United Kingdom (Director: Lenny Abrahamson, Screenwriters: Jon Ronson, Peter Straughan) — Frank is an offbeat comedy about a wannabe musician who finds himself out of his depth when he joins an avant garde rock band led by the enigmatic Frank—a musical genius who hides himself inside a large fake head. Cast: Michael Fassbender, Domhnall Gleeson, Maggie Gyllenhaal, Scoot McNairy.

I Origins / U.S.A. (Director and screenwriter: Mike Cahill) — A molecular biologist and his lab partner uncover startling evidence that could fundamentally change society as we know it and cause them to question their once-certain beliefs in science and spirituality. Cast: Michael Pitt, Brit Marling, Astrid Bergès-Frisbey, Steven Yeun, Archie Panjabi.

The One I Love / U.S.A. (Director: Charlie McDowell, Screenwriter: Justin Lader) — Struggling with a marriage on the brink of falling apart, a couple escapes for the weekend in pursuit of their better selves, only to discover an unusual dilemma waiting for them. Cast: Mark Duplass, Elisabeth Moss, Ted Danson. 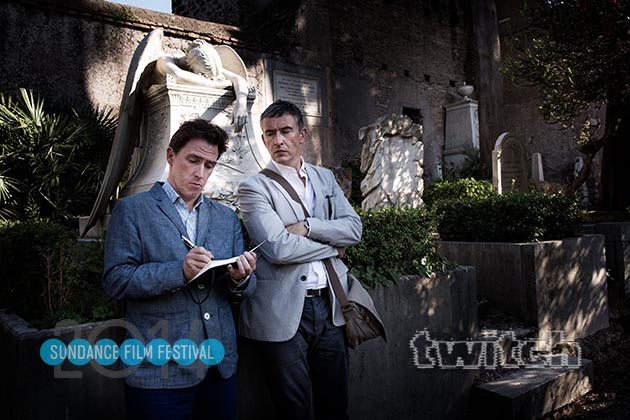 The Raid 2 / Indonesia (Director and screenwriter: Gareth Evans) — Picking up where the first film left off, The Raid 2 follows Rama as he goes undercover and infiltrates the ranks of a ruthless Jakarta crime syndicate in order to protect his family and expose the corruption in his own police force. Cast: Iko Uwais, Yayan Ruhian, Arifin Putra, Oka Antara, Tio Pakusadewo, Alex Abbad.

White Bird in a Blizzard / U.S.A. (Director and screenwriter: Gregg Araki) — Based on the acclaimed novel by Laura Kasischke, White Bird in a Blizzard tells the story of Kat Connors, a young woman whose life is turned upside down by the sudden disappearance of her beautiful, enigmatic mother. Cast: Shailene Woodley, Eva Green, Christopher Meloni, Shiloh Fernandez, Gabourey Sidibe, Thomas Jane.

Young Ones / U.S.A. (Director and screenwriter: Jake Paltrow) — When a series of events is set into motion, altering his young life forever, Jerome is forced to make choices that no child should ever have to make. Cast: Michael Shannon, Nicholas Hoult, Elle Fanning, Kodi Smit-McPhee. 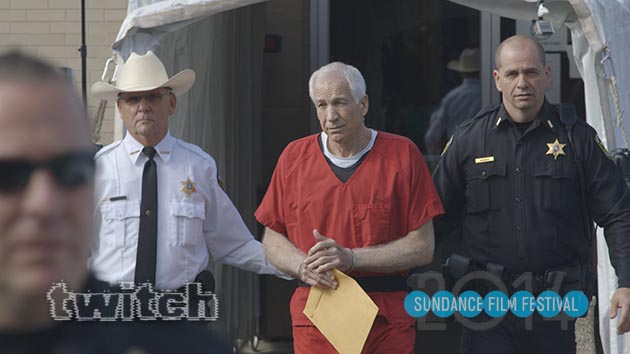 Finding Fela / U.S.A. (Director: Alex Gibney) — Fela Anikulapo Kuti created the musical movement Afrobeat and used it as a political forum to oppose the Nigerian dictatorship and advocate for the rights of oppressed people. This is the story of his life, music, and political importance.

Freedom Summer / U.S.A. (Director: Stanley Nelson) — In the summer of 1964, more than 700 students descended on violent, segregated Mississippi. Defying authorities, they registered voters, created freedom schools, and established the Mississippi Freedom Democratic Party. Fifty years later, eyewitness accounts and never-before-seen archival material tell their story. Not all of them would make it through.

Happy Valley / U.S.A. (Director: Amir Bar-Lev) — The children of "Happy Valley" were victimized for years, by a key member of the legendary Penn State college football program. But were Jerry Sandusky’s crimes an open secret? With rare access, director Amir Bar-Lev delves beneath the headlines to tell a modern American parable of guilt, redemption, and identity.

Last Days in Vietnam / U.S.A. (Director: Rory Kennedy) — During the chaotic final weeks of the Vietnam War, the North Vietnamese Army closes in on Saigon as the panicked South Vietnamese people desperately attempt to escape. On the ground, American soldiers and diplomats confront a moral quandary: whether to obey White House orders to evacuate only U.S. citizens. 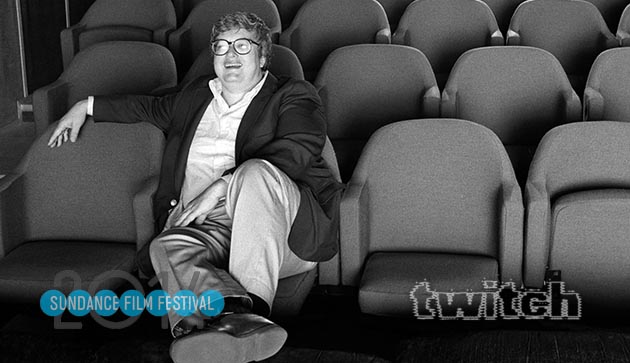 Life Itself / U.S.A. (Director: Steve James) — Life Itself recounts the surprising and entertaining life of renowned film critic and social commentator Roger Ebert. The film details his early days as a freewheeling bachelor and Pulitzer Prize winner, his famously contentious partnership with Gene Siskel, his life-altering marriage, and his brave and transcendent battle with cancer.

Mitt / U.S.A. (Director: Greg Whiteley) — A filmmaker is granted unprecedented access to a political candidate and his family as he runs for President.

This May Be the Last Time / U.S.A. (Director: Sterlin Harjo) — Filmmaker Sterlin Harjo's Grandfather disappeared mysteriously in 1962. The community searching for him sang songs of encouragement that were passed down for generations. Harjo explores the origins of these songs as well as the violent history of his people.

To Be Takei / U.S.A. (Director: Jennifer Kroot) — Over seven decades, actor and activist George Takei journeyed from a World War II internment camp to the helm of the Starship Enterprise, and then to the daily news feeds of five million Facebook fans. Join George and his husband, Brad, on a wacky and profound trek for life, liberty, and love.

We Are The Giant / U.S.A., United Kingdom (Director: Greg Barker) — We Are The Giant tells the stories of ordinary individuals who are transformed by the moral and personal challenges they encounter when standing up for what they believe is right. Powerful and tragic, yet inspirational, their struggles for freedom echo across history and offer hope against seemingly impossible odds.

WHITEY: United States of America v. James J. Bulger / U.S.A. (Director: Joe Berlinger) — Infamous gangster James "Whitey" Bulger’s relationship with the FBI and Department of Justice allowed him to reign over a criminal empire in Boston for decades. Joe Berlinger’s documentary chronicles Bulger’s recent sensational trial, using it as a springboard to explore allegations of corruption within the highest levels of law enforcement.

Do you feel this content is inappropriate or infringes upon your rights? Click here to report it, or see our DMCA policy.
AnnouncementsBerendalGareth EvansSundanceThe RaidThe Raid 2XYZ Films