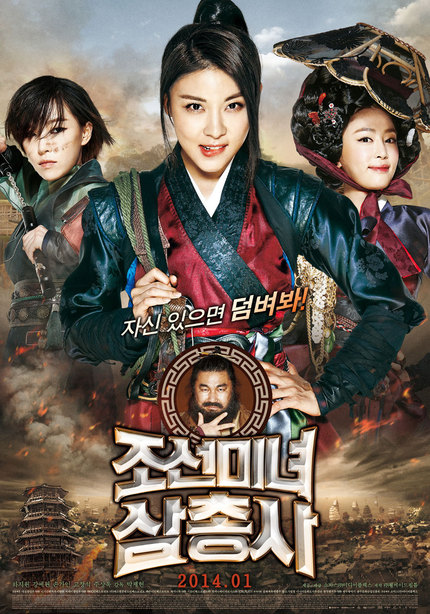 The local Korean cinemas will kick off the new year with empowered female warriors getting into some silly situations in the period action comedy The Huntresses.  Rounding out these trio bounty hunters is Ha Ji-won (As One), Kang Ye-won (Quick) and Son Ga-in, as well as Joo Sang-wook and Ko Chang-seok in supporting roles.  If your looking for an alternative to the typical boys-only club in your action, then this certainly fits the bill.

As a child, Jin-ok witnessed the murder of her father and narrowly escaped death. She is taken under the wing of Mu-myeong, the man who saved her life, and trains in martial arts alongside two other girls. 10 years pass and the girls are now Joseon's best bounty hunters. One day, Jin-ok is asked to take on a case for a handsome reward. Against their master's wishes, the trio takes on the job, not knowing it will eventually lead them to the man responsible for the death of Jin-ok's father 10 years before

Originally set for theatrical release in May, Showbox has delayed the film to January 29th.  You'll find the trailer embedded below.

Do you feel this content is inappropriate or infringes upon your rights? Click here to report it, or see our DMCA policy.
ActionComedyhuntressestrailerJae-Hyun ParkJi-won HaYe-won KangGa-in SonSang-uk Ju